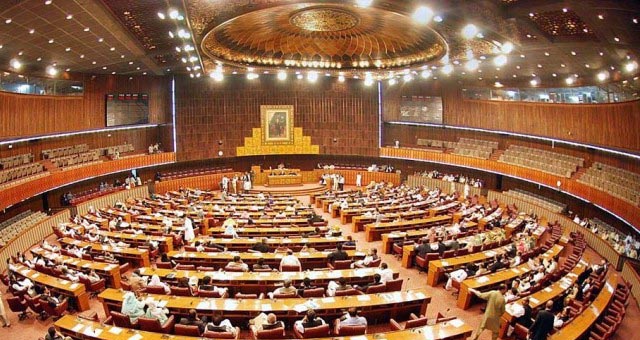 Following the National Assemblyâ€™s approval, the PPB will now be applicable for a period of two years.
Minister of Science and Technology Zahid Hamid presented the bill in the assembly, where Prime Minister Nawaz Sharif was also present.

On June 30, the Senate had unanimously passed the â€˜controversialâ€™ PPB following consensus â€“ albeit grudgingly â€“ between the government and the opposition.

Described in the Senate session as a â€˜hardâ€™ law, the PPB widens the scope of law enforcement agenciesâ€™ powers. Hamid had presented the bill in the senate, in the absence of Interior Minister Chaudhry Nisar Ali Khan. He had stated that the passage of the bill was of â€˜utmost importanceâ€™ in light of the military operation in North Waziristan, codenamed â€˜Zarb-e-Azbâ€™.

Additionally, the term â€˜enemy alienâ€™ describes a person whose identity as a Pakistani is unascertainable.

The use of force by armed forces has been limited to officers of Grade-15 or above and an internal inquiry by the head of the relevant law enforcement agency will be held in the event of death through the use of force. If required, all such cases will be subject to a judicial inquiry. Meanwhile, the remand period for an accused has been fixed at 60 days and, on reasonable ground, the government has the right to hold a detainee for 90 days at a designated internment camp.

Cybercrimes and offences related to information technology, as well as the crossing of national boundaries illegally have been included in the list of scheduled offences. Punishments under these offences can be extended to 20 years. The PPB states that special courts will be formed in consultation with the chief justices of the High Courts and appeals against the special courtsâ€™ decisions can be made in the High Courts.