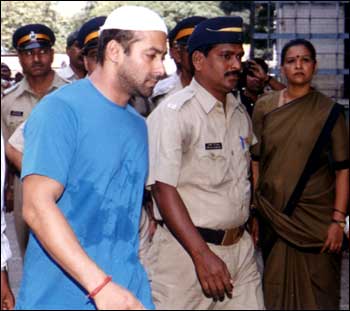 The sentence has been pronounced for Salman Khan in the 2002 hit-and-run case. The actor had been on bail since October 25, 2002. The court found him guilty of culpable homicide not amounting to murder under section 304-II of the IPC for an act committed with knowledge that it could result in someone’s death. All charges against him have been proven and a Times Now report stated that he was driving the car under the influence of alcohol.

The verdict will be a huge blow for the film industry. Apparently, there is an amount as huge as Rs 200 crore riding on his next two films, Bajrangi Bhaijaan and Prem Ratan Dhan Payo. The actor has been shooting for both the films and had arrived in Mumbai just a day before the verdict was to be announced. Bajrangi Bhaijaan is going to be Salman Khan’s big Eid release on July 25, 2015. However the makers of the film were waiting for the verdict to decide their further course of action.

May 6, 12:45 pm: Public prosecutor asks for 10 years imprisonment for Salman
The doors of the court room have been shut by the police to control the crowd, as Salman Khan’s fate is to be locked today in the hit-and-run case. The final verdict will be announced at 1:20 pm.

May 6, 12:45 pm: Public prosecutor Pradeep Gharat has closed the argument after asking the judge to give maximum punishment of 10 years to Salman Khan for rash and drunken driving, which killed one. He also added that the quantum of punishment should be based on seriousness of offence, and must not be based on the charity work done by the actor.

Meanwhile, Salman’s family doctor has assured that the actor’s mother is fine, and the reports of her falling sick are false. 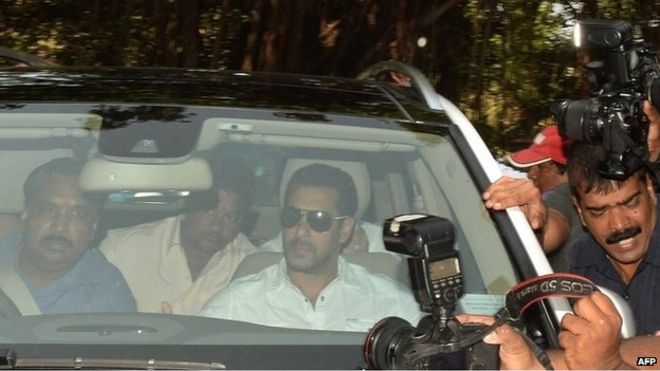 May 6, 12: 20 pm: Public prosecutor Pradeep Gharat begins his argument as Salman Khan’s lawyer has already spoken in the actor’s defence.

Salman Khan listened to the verdict with tears in his eyes. As his lawyer started to speak about the condition of his heart, the Veer actor stopped him from talking about it.

12:23 pm: Meanwhile, Ashok Singh moves out of the court to help the other family members rush home as Salman’s mom Sushila has fallen ill after knowing about the verdict.

Salman Khan’s defence lawyer Shrikant Shivade is exerting on the Alistair Pereira case in which the number of deaths were more than that in Salman’s hit-and-run case, comparing the sentence given in the former case.However, the experts are of the opinion that it’s a weak defence and may not help in any way.Meanwhile, Salman Khan’s mother Sushila has fallen sick at the Galaxy Apartments. The court proceedings have now come to a halt as there is lot of commotion inside the hearing room. The excess crowd is now being controlled, and only necessary people are being allowed inside.

May 6, 11:50 am: The lawyers are pleading to pay hefty compensation and are requesting to reduce the punishment. They are pitching for giving compensation to the family of those affected. Meanwhile, if the quantum of punishment is more than 3 years, it will be a serious issue as the Bombay High Court may go on a vacation and Salman may not get immediate bail.

May 6, 11:35 am: After the charges have been proved and the court took a break, Arbaaz Khan, Sohail Khan and Baba Siddiqui came out of the hearing room, but did not talk to the media. Salman Khan is wearing white today, much in contrast to blue which he sported at almost every court hearing. When the judge asked him if he wants to say something, the actor kept quiet and did not say anything in his defense. Salman’s lawyer pleaded the judge for maximum sentence of 2 years and fine, keeping in mind his humanitarian work under Being Human.

The final verdict in Salman Khan’s hit-and-run case is out and the judge has said that the charges against the actor have been proved. It has been proved that Salman was driving the car, and not his driver Ashok Singh. The judge added that Salman was driving the car under influence of alcohol. The Being Human crusader has been convicted under all charges including that of culpable homicide.

Fans support Salman Khan: The huge support for Salman was for all to see at the Sessions Court. Heavy security and barricading was put to control the fans and overcrowding. A look-alike of the actor, Shan Ghosh, was also present at the Mumbai court. Fans in Varanasi and many other cities also prayed for the actor and huge support poured in on the social media as well. Hawans were performed and namaz was offered for the actor who is also known for his Being Human campaign. On the other hand, a Tamil group in Mumbai protested against Salman, demanding strict punishment for the actor.

Shah Rukh Khan visited Salman Khan: Shah Rukh Khan proved to be a friend indeed as he visited Salman a day before the hearing, soon after Salman arrived from Srinagar. Taking time out from his packed schedule, SRK rushed to Salman’s Galaxy Apartments to provide support ahead of the crucial hearing. Local politician Baba Siddiqui, who was the man behind uniting Salman and SRK at his iftar parties, was also with the Kick superstar.
Source: The Times Of India

Put It Inside, You Dirty Mind!
23 Tweets by Celebrities that will Shock You On Salman Khan’s Verdict
To Top