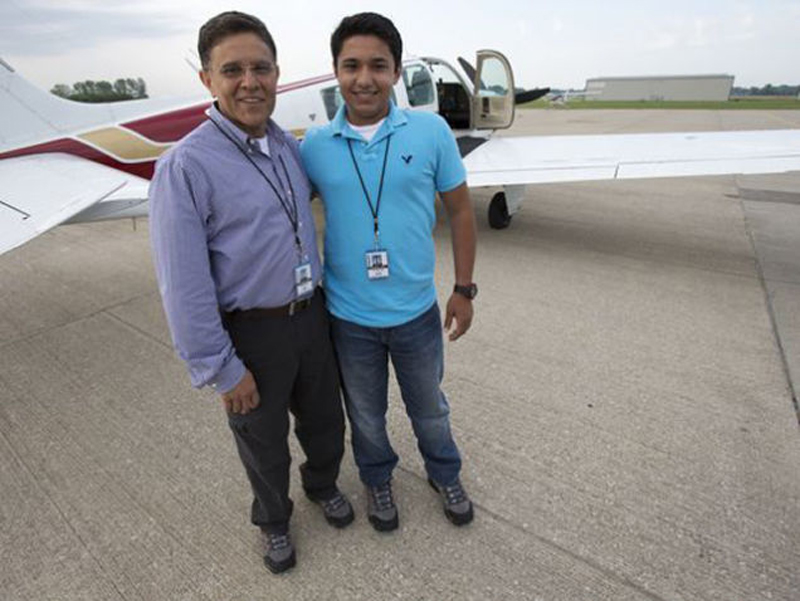 Haris Suleman, 17, died after his single-engine plane crashed near American Samoa early Wednesday. His father, Babar, was also on the plane with his son, and remains missing at sea. The two were attempting to fly around the world in 30 days to break a record and to raise money for a nonprofit that builds schools in rural Pakistan.

The specific record the two were trying to break, ABC News reports, was “the fastest circumnavigation around the world with the youngest pilot commanding a private, single engine airplane.”

The U.S. Coast Guard informed their family Wednesday morning after searching for six hours. Hiba Suleman, Haris’ sister, told the Indianapolis Star that the two had nearly finished their trip:

Haris was testing the limits of his patience and endurance on the grueling monthlong trip, facing travel delays, discomfort from sitting long hours in a cramped cockpit, food poisoning and more. He and his father still faced more stops in Hawaii, California and Texas before their expected arrival home in Indiana on Saturday.

But on Tuesday, several hours before leaving American Samoa, Haris still held on to his enthusiasm for the journey, taking time to tweet that “Pago Pago is without a doubt (among the) top 5 places I’ve been this summer.”
Hiba Suleman also told the Star that her father and brother had trained and taken the proper precautions for their journey:

Hiba Suleman said her father and brother had taken an open-water survival training course before they began their adventure, wore ocean survival “Gumby suits” and that her father also wore a locator beacon on his person. She last spoke to her father Tuesday morning, local time, and said he told her he was watching the weather and would not leave American Samoa if threatening weather were still in the area.

And while the two were hoping to break a record, Hibe Suleman says that “time wasn’t really an issue.” The National Transportation Safety Board said Wednesday that they are investigating the crash and that plane’s black box is pinging, which the family hopes will help the Coast Guard find Babar.

There Is No Difference Between the Jewish Holocaust 1940 and Palestinian Holocaust in 2014. Last One Is The Worst!
B-52 Flew For 10 Hours Over America Carrying Missiles Armed With Nuclear Warheads
To Top