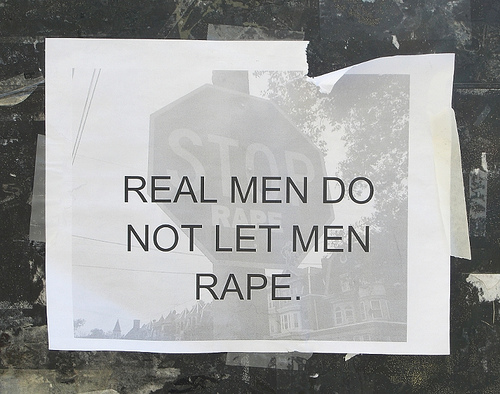 Hundreds of young men from Pakistan started standing up to join the hashtag campaign. A Pakistani Twitter user whose handle @baysharam translates to shameless joined in saying:

Remember that five-year-old girl who was raped in Lahore, last year? Her rapist(s) are still out there. Amongst us. #MenAgainstRape

When the 2012 Delhi gang-rape story hit the news wires, hundreds of tweets emerged from Pakistan condemning the barbaric incident. Some spoke about India’s rape problems while others looked at the rising instances of rape in the South Asian region. It was a story so horrific that it garnered world media attention for weeks and to this day an increase coverage of rapes in India is evident since then.

Indian Blogger Krshna Prashant took the myths regarding rape head on in her scathingly satirical piece:

He wobbled in at 11pm. She did the dishes quietly, her heart racing as she heard his footsteps get closer. Tears stung her eyes as he put his hands on her waist. She could smell the whiskey on his breath. He tugged at her pallu, letting it fall to the ground.Â Not today,Â she begged. Her back ached and her head felt like it was going to explode.

He grabbed her hair and pulled her to their bedroom. She scrambled to find her pallu as they walked past the hall. Their son stared in horror. He shut the door behind him and slapped her. He told her to stay quiet and take her clothes off. She did as she was told.

What do you mean my son raped his wife. There is no such thing.

This, is a refreshing and powerful stance againstÂ violence, however a closer look at the tweets reveals many of the myths Prashant addressed.

Here’s some rape apologia at display from South Asia:

They wear seductive clothes and incite people and end up getting raped. It is not rape, it is sensual sex.

Some used the hashtag to suggest sexual violence as a punishment for rape:

Only time when I truly support rape! #MenAgainstRape | this should rape punishment! pic.twitter.com/JG0mrUswTC

Some had more nuanced views.

Rape is rape and it’s not justified. It’s a very unsavoury act and it should be eradicated from our society. #MenAgainstRape â€” Lost (@meraydost) June 8, 2014

Since when did the clothes women wear become such a concern to every man on this planet? #MenAgainstRape â€” HÃ¤mmÃ¤d (@HFooty) June 8, 2014

Rape is the most despicable, disgusting and vile thing a person can do. Being a #rape apologist comes second #MenAgainstRape @ThePukaar â€” Rehan Kazi (@TheRehanQazi) June 8, 2014

Accusing the Rape victim for provoking for Rape is as the same as accusing a Murdered person for their own murder. #MenAgainstRape

While many feel that this trend is a step forward as men stand up against violence, others have questioned the effectiveness of a Twitter trend on real life circumstances. Will it change the way rape survivors are seen in the society? Will it stop rapes from happening? Will it provoke law enforcement agencies into action? These are some of the questions being raised. Whether you are on the cynical side of social media trends or an enthusiast,Â discussions like #menagainstrape provide a small window in to young minds and their perceptions about sexual violence.

An article by Sana SaleemÂ

How Do I PayBack The Sacrifices My Ancestors Made? [Infographics]
Death Toll Rises to 74 as Shahbaz Qalandar’s URS Ends
To Top