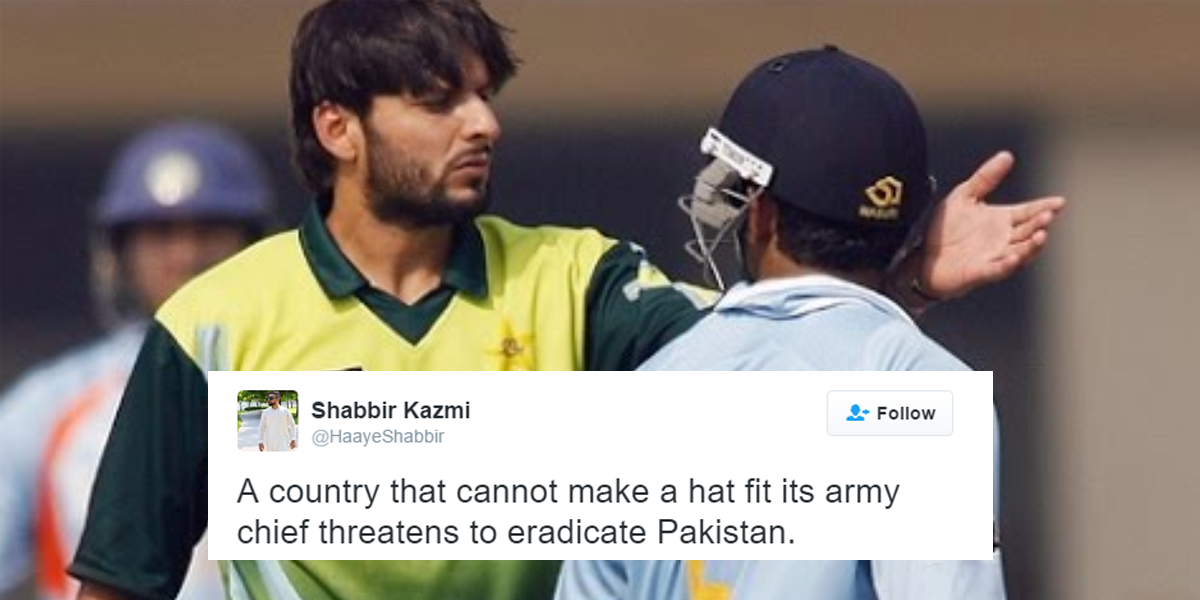 Just like after every other attack on India, Indian tradition of blaming Pakistan for it continued after Uri attacks. Indians on Twitter openly blamed Pakistan for it and threatened to attack Pakistan. But how Pakistanis responded to it was something worth seeing.

Started off as a poll by this Indian.

Yes Mr. Sanjay Dixit wanted a war. But unexpectedly the results were 54% in the favor of no. So the joke’s on him.

Are we Indians prepared for a nuclear war for finishing Pakistan as a country. Many of us may die in the process

They are sad about their soldiers being killed and then they want another war?

Indians are sad about soldiers dying but want to wage a war against Pakistan so more soldiers die. pic.twitter.com/NbvWBKCPLc

India, the reality is.

That you cannot kill us with your tweets.

"Pooja, I understand you're sad about the incident but you cannot kill Pakistani soldiers with your tweets." pic.twitter.com/uOChJP5W1k

Indian cricketer Gautam Gambhir made a tweet that targeted Pakistan as well. To which the replies were hilarious.

Pretty sure this scene still haunts him.

What about a never ending terrorism in Pakistan by Indian proxies?

Wasim bhai had something to say as well.

No but honestly what exactly is this thing they call their army chief?

A country that cannot make a hat fit its army chief threatens to eradicate Pakistan. pic.twitter.com/GUGPjnOHsI

Another reason why there should be no war.

The torturous Bollywood movies they make out of it.

An Indian minister tweeted this.

Pakistan is a terrorist state and it should be identified and isolated as such.

And this is what he gets in reply.

Life is hard when you are bald and say stuff like this. That too to Pakistanis.

Actually the thing is.

Yes this is the Indian logic. This is a beautiful logic.

"The terrorists had some items which had Pakistani markings on," he said."

I have a pizza in my room, I am an Italian. #UriAttack

Well if you threaten to attack Pakistan we are not just going to sit and watch.

An Indian account tweets this and gets the right response.

Pak Has Taken Us For Granted.They Know We Just Condemn &Complain To UN.It's Time For Action That They'll Fear To Even Cross India.#UriAttack

You ask us to cross India? Here you go.

Basically our humor is enough to take India on. No need for the army.

Love how Indian twitter is ready to wage war against Pakistan and how Pakistanis, chill af, are quoting their tweets with funny captions.

This 12 Year Old’s Story About Fighting Cancer Will Be The Best Thing You Read Today!
Indians Copied And Ruined Dil Dil Pakistan For Us Pakistanis And We Don’t Know How To React To This
To Top