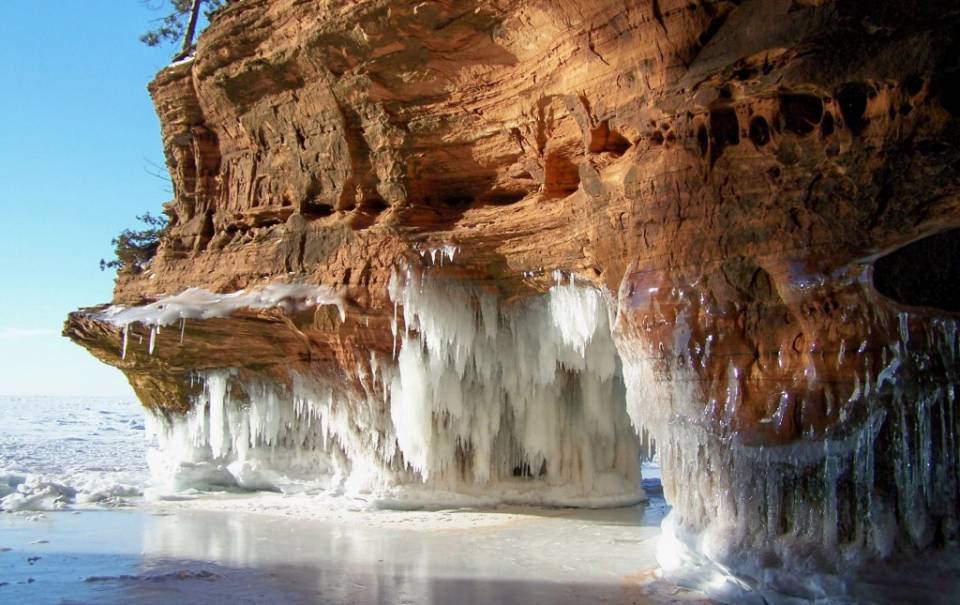 It takes somebody truly adventurous to be able to venture through a vast natural cavern that is millions of years old. While spelunking through most caves, you expect to find pale, blind creatures, massive stalactites and stalagmites, and plenty of darkness. But these incredible caves have something even more special to offer to anyone who dares to explore their depths. I don’t know which of these I should attempt to cross off my bucket list first! 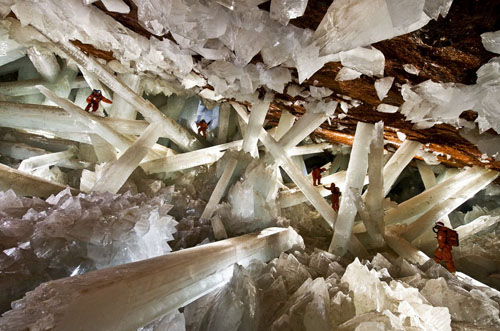 Discovered in 2000 by two brothers who were drilling below the Naica mine near Chihuahua, the Cave of Crystals is a glittering spectacle with temperatures that can reach up to 112 degrees. Many of the crystals, which are estimated to be about 600,000 years old, can be several feet thick, and the smaller ones are razor sharp. Forget diamonds; if you really love a woman, take her to a cave filled with crystals bigger than her wildest dreams. 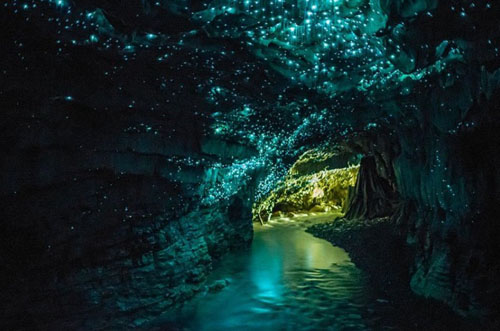 Formed over 30 million years ago, this cave is one of the most brilliant displays of bioluminescence on Earth. Thousands of glowworms, which are native to New Zealand, hang from the walls of the cave from strands of silk and use their dazzling blue light to attract prey. You may not ever find a cavern filled with fairies, but this is pretty darn close. 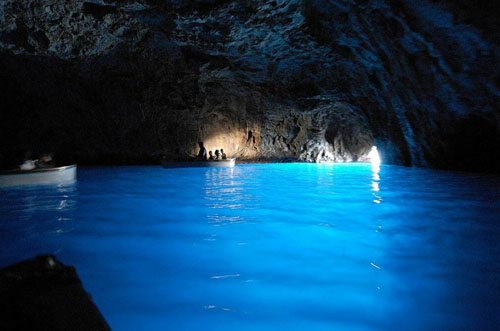 If youâ€™re ever near Capri, Italy, you NEED to take a trip to the Blue Grotto. Once thought to be inhabited by sirens and devils, the cave is known for its radiant blue water. When the sunlight enters the cave through an underwater entrance, the water filters out the red light and leaves only the blue light to illuminate the cavern. The result is an incredible phenomenon that leaves no need for color enhancements on all the photos youâ€™ll take there. 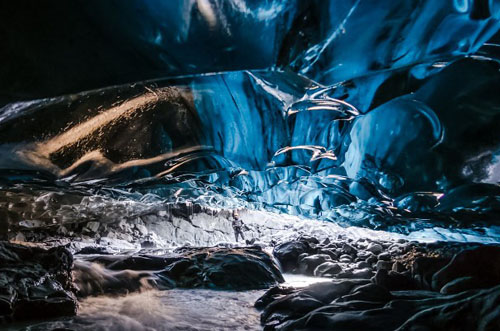 Formed entirely out of ice, glacier caves are best to visit in the autumn and winter, when the ice isnâ€™t as likely to collapse and the glaciers donâ€™t move as quickly. Many of them also take on a bright blue color, which is common in parts of glaciers (such as the underside, or in this case, the inside) which have not been turned white by the sunâ€™s UV rays. Would you be daring enough to venture inside a cave that could melt? 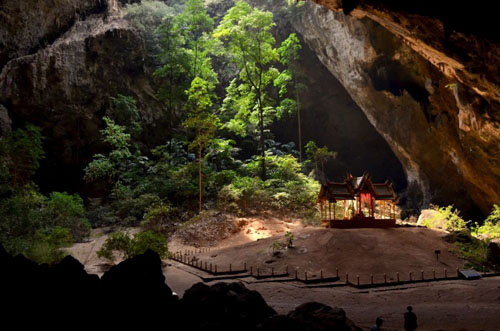 Inside the Khao Sam Roi Yot National Park is the Phraya Nakhon: an incredible cave with an interesting history behind it. Sunlight filters through the top of the structureâ€™s collapsed ceiling, illuminating the Kuha Karuhas pavilion that was originally built in 1890 for King Chulalongkorn. Since its construction, other local kings have visited the cave and left their signatures on its walls. This is one cave that is majestic in every sense of the word. 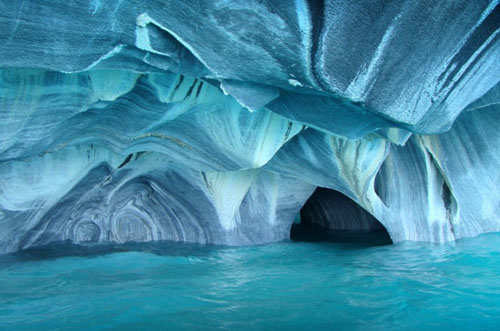 Anyone whoâ€™s willing to travel to the General Carrera Lake in Patagonia is in for a serious treat. Crystal-clear water tinted a dazzling blue by glacial silt accentuates the intricate designs in what many call he most amazing cave network in the world. The water is also responsible for forming the unique shape of the caverns and walls, making an Earthly cave appear very otherworldly.

7. Cave at the Mutnovsky volcano (Russia) 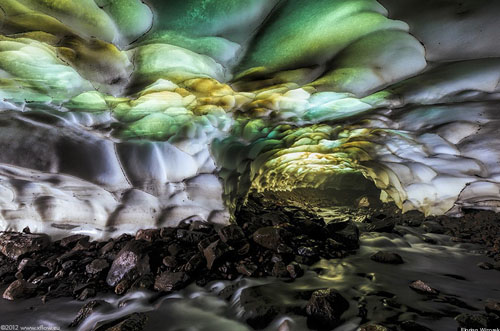 It may seem crazy to think that an ice cave could form at the base of a volcano, but thatâ€™s the sort of thing that tends to happen in Russia. Hot springs have carved out the caveâ€™s incredible shapes, while light that filters in through the roof creates an incredible color display of greens, purples, and blues. Many of those who have found the cave stumbled upon it by accident while exploring the area around the volcano, making this mysterious ice structure even more incredible. 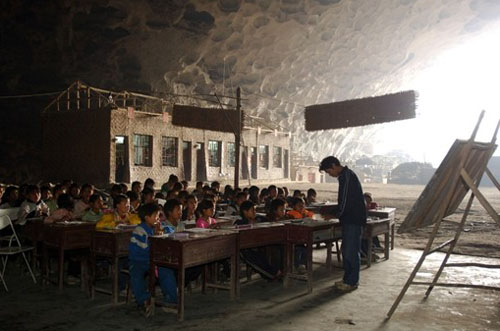 Itâ€™s thousands of years old, but now, this otherwise ordinary cave serves as a classroom for 186 students and eight teachers. Meaning â€œin caveâ€ in Chinese, Dongzhong began its role as an educational structure in 1984 and is now one of the coolest schools around. I would have been way more excited to go to science class if I knew it was happening here. 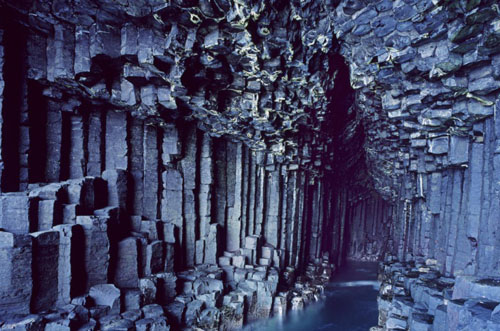 Although this cave on Staffa Island looks like it was painstakingly hand-carved by someone with an affinity for hexagons, its incredible geometric structure is completely natural. Hot lava that helped form the cave cooled and cracked in a hexagonal pattern. As the cracks extended down the mass of lava and shrank, it created the columns that the cave is famous for today. Nature can be a very peculiar artist sometimes. 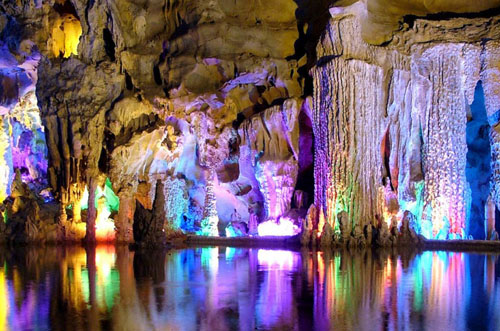 Ok, Iâ€™ll be honest– the lighting in this colorful cave is completely artificial. But does it really matter? The Reed Flute cave has been a popular destination for well over a thousand years, as evidenced by transcriptions inside that date back to 792 AD. It was named for the reeds that grow just outside the entrance, which can be made into flutes. The formations inside the cave are just incredible, and combined with all the surreal lighting, they prove that amazing things can happen when man and natureâ€™s efforts combine. 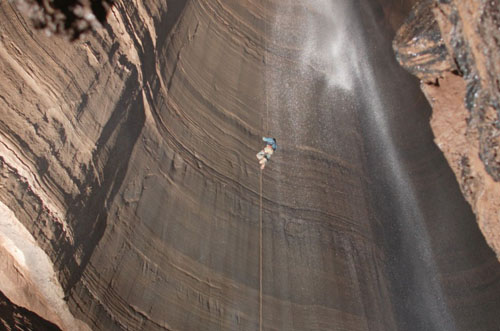 Northeast Georgia is home to Ellisonâ€™s cave, which contains the appropriately-named Fantastic cave pit. At 586 feet deep, itâ€™s the deepest known cave pit in the United States and a dream come true for a dedicated rappeler. A rock dropped from the top is said to take about eight seconds to reach the ground. If dropping almost 600 feet into a deep, dark cave is what you fancy, then a trip to Georgia is definitely in order. 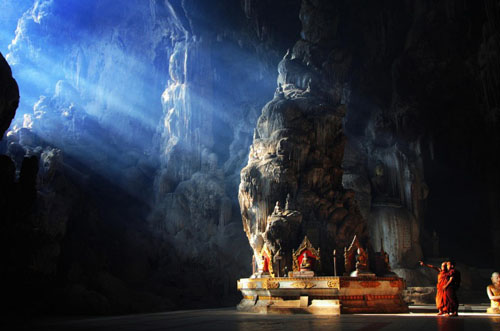 According to legend, Kyaut Sae Cave was originally used as a place of hiding for locals who wanted to hide from the Mongols in the 13th century. Now, the cave has another special purpose. A Buddhist temple, which was built on the side of a cliff, is the entrance to the cave, which acts as a meditation area for monks. Tourists are welcome to visit the temple, but few choose to do so. Perhaps a place as incredible as this should be left as undisturbed as possible, anyway. 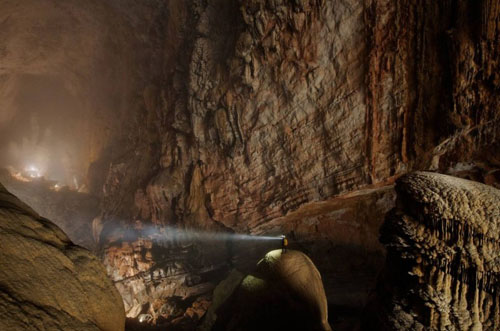 The world’s largest cave is located in Vietnam’s Quang Binh province. First found by a local man in 1991, the cave is nearly 700 feet wide, 500 feet high, and almost six miles long. Many of the cave’s structures that have formed in its millions of years of existence are massive enough to make explorers appear minuscule in comparison. This must be what an ant feels like in our everyday world. 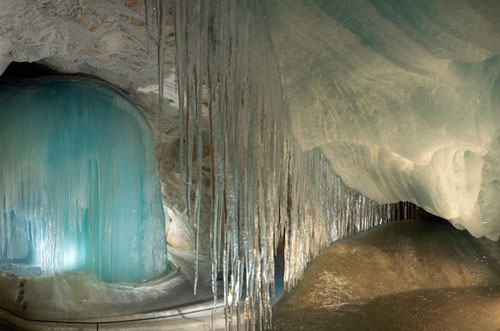 The world’s largest ice caves were discovered in the late 19th century, which is pretty late considering how awe-inspiring they are. The entire labyrinth stretches twenty-five miles, and just like all ice caves, its structure both outside and inside is constantly changing due to the ice that melts and refreezes. Any dedicated spelunker would be missing out if they didn’t check out Eisriesenwelt… but they’d be well-advised to bundle up first. 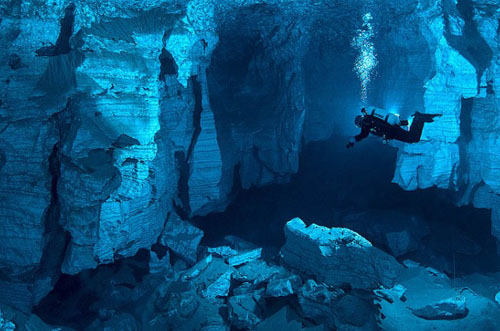 Exploring Ordinskaya, or the Orda Cave, in Russia’s Ural region is the perfect adventure for anyone who enjoys their time in the water. The cave consists of over 3 miles of underwater chambers, and while it is possible to get lost, rest assured that seeing where you’re going won’t be an issue— the water is so clear that you can see up to fifty yards ahead. After seeing this incredible place, you might never want to come up on dry land again. 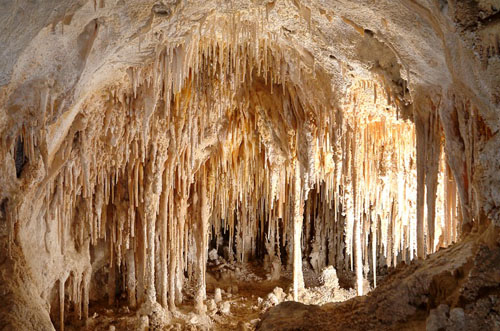 Located in what is now New Mexico, the Carlsbad Caverns National Park is home to many impressive caves, all of which were created between 4-6 million years ago. Sulfuric acid formed from mixed water dissolved the area’s limestone, widening cracks in the rock and eventually creating the caves we know today. What makes these caves truly notable, though, are the massive deposits of gypsum, clay, and silt, whose presence gives the caves a fantastical and almost cartoonish look. 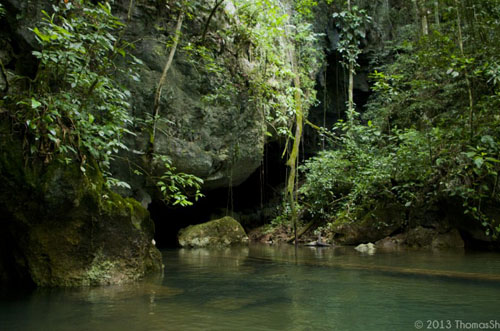 When you first enter this cave, you might not find it to be anything too special… until you notice the skulls. Barton Creek Cave was used by the Maya for ceremonial and burial purposes, and many of their artifacts (and remains) still lie amongst the cave’s natural geological formations. The entrance to the cave, while beautiful, somehow manages to give off the vibe that the place you’re about to enter is far more than just a rocky structure— it’s sacred ground. 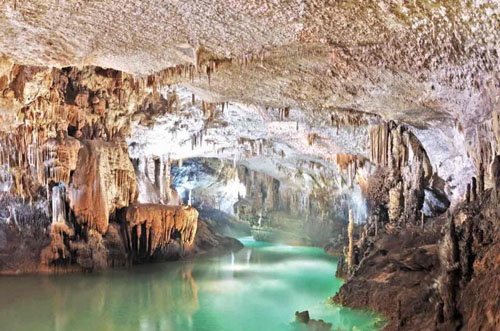 Upon entering the Jeita grotto, you immediately understand why its name translates to “roar” of water. The lower grotto floods your ears with the sounds of the rushing water and air, which echo through the cave’s chambers. As you travel deeper, though, the sounds of nature are replaced by a deep silence, allowing you to look around and take in the dazzling beauty of the cave’s intricate geography without any distractions. 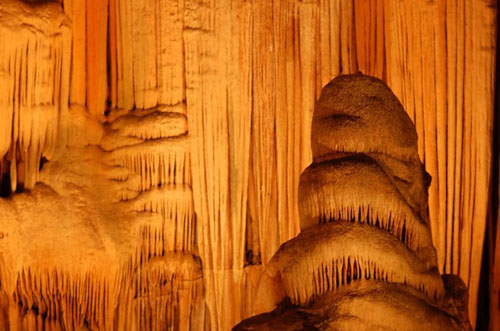 In the Western Cape Providence of South Africa lie a series of caverns with dramatic and colorful limestone features. Artifacts show that many of the main cave entrances once served as homes for people living in the Middle and Later Stone Ages, but now the structures are used for tours for those who love a bit of adventure. Although about four kilometers of the caves have been discovered, only a quarter of that is open to the public. But one kilometer is plenty enough for those who want to be awestruck by one of the African continent’s greatest wonders. 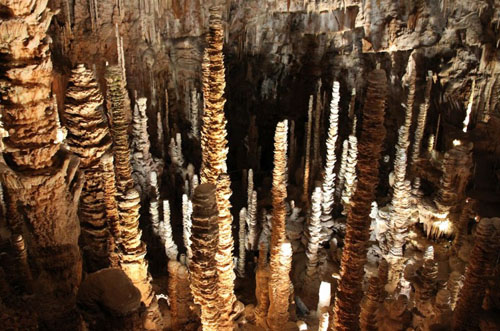 If you dare to venture 100 meters underground, the Aven Armand will make it worth your while. It boasts over 400 unique types of stalagmites, including the largest one known in the world, which stands at nearly 100 feet tall. While the Eiffel Tower is certainly a sight to behold, consider checking out Mother Nature’s beautiful sculptures if you ever get the opportunity to go to France.

19 Amazing Animal Facts That Will Make You Smile.
10 Ways to Lose Weight Fast
To Top