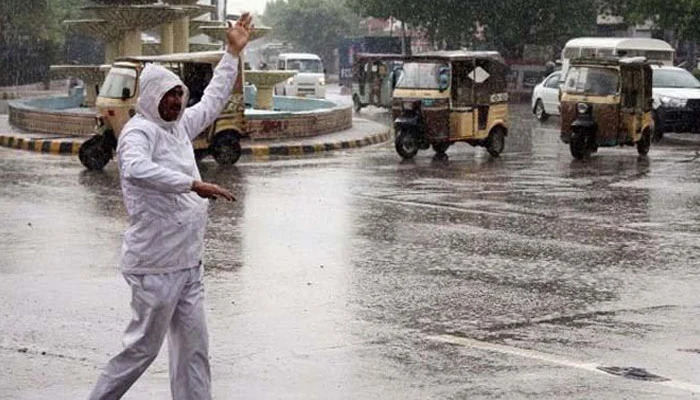 As said by Pakistan meteorological department (PMD), the monsoon weather system is likely to dump a ponderous amount of rain in Karachi.

The chief of (PMD) Sardar Sarfraz predicted on Thursday saying, “monsoon winds will enter Karachi division after bringing rainfall to the otherwise parched district of Tharparkar”.

As per Sarfraz, Karachi is likely to have 30% more rain than usual during the current monsoon season. The monsoon season is likely to last till August, the month of Sawan as per the local calendar. The level of humidity will also increase due to the rising levels of the sea and the intensity of rain.

According to PMD early warning center, humid and hot weather is expected in the city. The Desert wind of Balochistan will blow in the morning and in the evenings the cool sea breeze is expected. PMD also predicted that this heavy rainfall may also trigger land sliding in Kashmir, Galiyat, Murree, and Skardu.

The strong winds may also damage the vulnerable and loose structures, the persistent spell could create pressure on Hub Dam leading to flash flooding in Dadu and Jamshoro districts. Furthermore, the department of PMD has advised all the authorities to be alert at this time.

However, the streets and commercial areas of Karachi are flooded, and the territorial damage is immense. It is deeply saddening that the financial capital of Pakistan is yet never ready to face any unexpected or expected weather changes. The rescue team must use inflatable boats to simply take people from work to their houses. The vulnerability of this situation is grieving. A large number of people who depend on daily wages for their survival are strongly affected and have to face very serious problems due to the negligence of the authorities.

CM Murad asks Karachi residents to stay inside during the wet weather.

Murad Ali Shah, the chief minister of Sindh, encouraged the populace on Sunday to stay inside during the city’s third round of rain as it lashed Karachi.

Murad checked the operation of the drainage system during his tour of the city’s various neighbourhoods to assess the situation and pleaded with the populace not to use the downpour as an excuse for a picnic.

The Sindh CM has encouraged parents to prevent their children from playing on highways and to keep them confined at home, citing the reason for the opening of major holes to drain the canals during the monsoon.

The fourth spell of the monsoon rains has begun in Sindh, according to the Pakistan Metrological Department, and the system has invaded the province.

Heavy rain is predicted to fall in Karachi over the next three to four hours.

From July 24, the Met Office predicted significant precipitation in Karachi and other parts of Sindh. It stated in its most recent climate warning that heavy precipitation with wind and storms is typical for Karachi.

According to the PMD’s most recent update, powerful monsoon currents have begun to move into Sindh and will continue to do so through July 26 and 27.