Finally, cricket has come home! Yes, after a gap of almost 6 years, international cricket has finally come back to Pakistan and the hot-spot for these games has been Lahore’s Gaddafi Stadium.

In the recent match to be played at the venue, Pakistan overpowered a Sri Lankan side that tried its best to win the tournament. In the third T20 match, the home side defeated the visitors by 36 runs, sending the fans in the audience absolutely berserk. 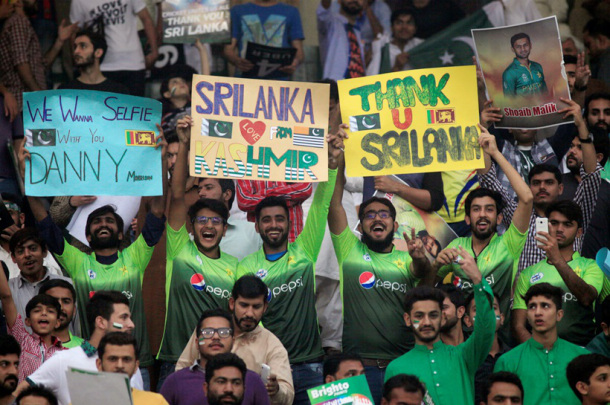 However, it wasn’t just the match that made the crowd roar off its seats. For the very first time, the people present at the stadium witnessed something that has never happened in Pakistan before but is very common in the West.

Video footage caught a young Pakistani guy proposing a girl in front of thousands of fans. You heard it correct. As seen in the video, the guy goes down on one knee and proposes the girl, to which she says yes and the couple then hugs in front of the cricket fans. At the sight of the incident, the fans started roaring and cheering.

The couple then waved to the crowd and hi-fives were thrown by the guy to his friends who were filming them. Apart from the cheers, many boos could also be heard in the crowd. People on social media have reacted differently to the incident. While some have spoken in favor of the couple, others have lambasted their actions, stating that things like these should be prohibited in the Islamic Republic of Pakistan.

This is how people reacted to the proposal on social media

What do you think of the incident? Are actions like these justified? Should the guy have gone to such an extent in public? Share your opinions with us in the comments section.

Amir Khan was spotted with Alyzeh Gabol during #PakvsSL and It Is Raising Many Questions
According to Police, Qandeel Baloch was Murdered at Mufti Qavi’s Friend’s House
To Top