A 17-Year-Old Young Bride Zoha Was Poisoned By In-Laws In The Name Of Honor And It’s A Terrible Loss!

When a family’s honor can only be restored through cold-blooded murders; this disgusting mentality and heinous practice still exists in Pakistan. Sadly, there have been so many cases that have been reported and even more undocumented, unheard and silenced. Islamically honor killing has no existence, in fact, murder is condemned entirely.

How many wives, sisters, and daughters will be slaughtered like cattle in the name of honor. A 17-year-old girl was murdered by her in-laws in Swabi. The story reported in a newspaper suggests that she was deliberately blamed for immoral acts in order to tarnish her character and dignity as a woman and later poisoned her to death. 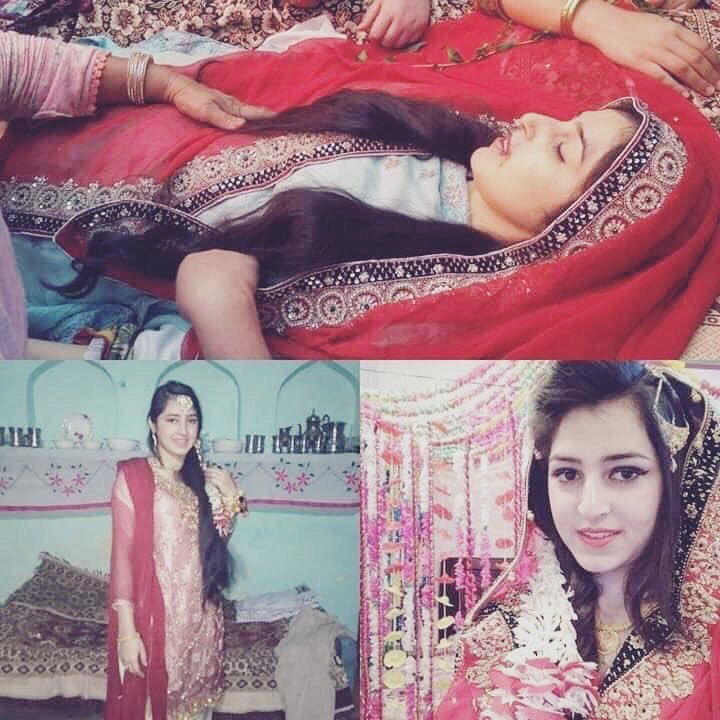 Zoha Who Married At The Tender Age Of 17 Had Big Dreams Of Her Life With Her Husband In The US, Which Her In-Laws Crushed By Breaking Her Slowly And Painfully!

On June 28, this young girl in Gandaf village died after being poisoned by her in-laws. The main culprits have been declared by Zoha’s parents to be the deceased’s mother-in-law Khatun Bibi and brother-in-law Mohsin Khan.

Zoha was married to Shahbaz Khan who had a business in the US. He planned to bring her to the states soon, so for the meantime, she lived with her husband’s family.

Her mother-in-law along with the others was highly against Zoha leaving to the US. But seeing her hopes high and dreams as big as the sky, Khatun Bibi started torturing her which started as mental and escalated to physical. She even blamed Zoha for having illicit relations with several men in her husband’s absence. Still, young Zoha endured with the hopes of being reunited with her dear husband soon.

Her father told the media that Zoha’s eldest sister who is also married into the same evil family and wife of the suspect Mohsin, told him about Zoha screaming in pain and begging her in-laws to take her to the hospital, to which they dismissed as low blood pressure and locked her in a room in return.

She said, “Zoha was taken to a local hospital in Topi when she was almost choking to death after eight hours”.  Some sources suggest that by the time she was taken to the hospital, she had already passed away. 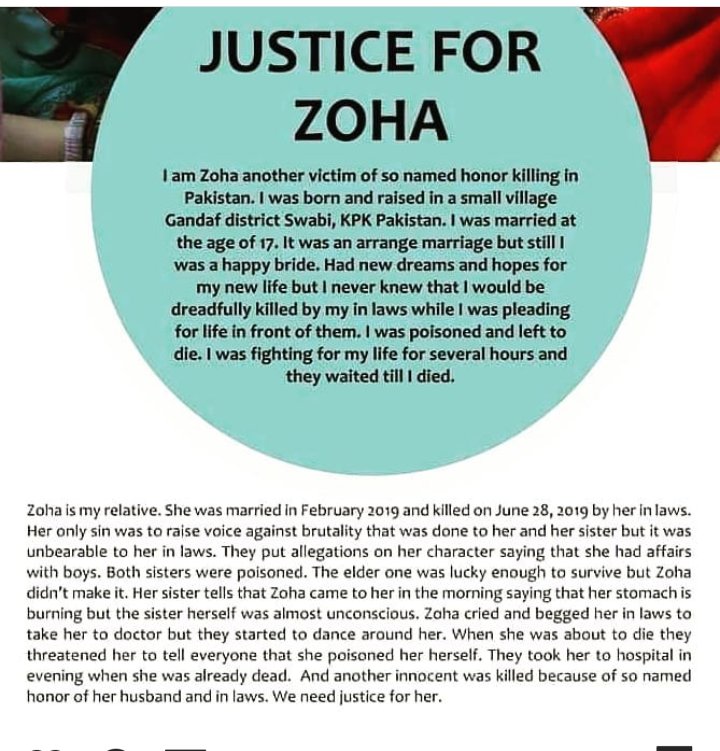 Pakistanis And The Entire Online Community From All Over The World Are Demanding Justice For Her.

17-year-old Zoha poisoned by her in-laws and now her character is being shattered by brutal killers. Please raise your voice and demand #JusticeForZoha
Let’s put an end to to this so-called fake Honour Killings taking several lives in this country. 😔 pic.twitter.com/ETD8gwV4Jr

Hopefully, the police will perform righteously instead of selling their honor for a few coins like most of our police officials have done.

After registering an initial report, the police are still waiting for the postmortem report to formally launch investigation into the case and arrest the suspects.
Ohh no actually they are doing deal with the suspects i.e mother-in-law and brother-in-law#JusticeForZoha

Indeed, the world has become so cruel to the women that one can wish that they didn’t step into such a barbaric world in the first place.

There is no honor in killing.
By Watching the current scenario of killing of girls in the name of honor , I can categorically claim that it was far more good to bury them at the time of birth(as like Arabs did in past) #saynotohonorkilling #JusticeForZoha pic.twitter.com/SjbNiZGXQZ

We need to raise our voices so that the matter can be taken to the higher authorities so there is no loop-hole for corruption, bribe, and deception.