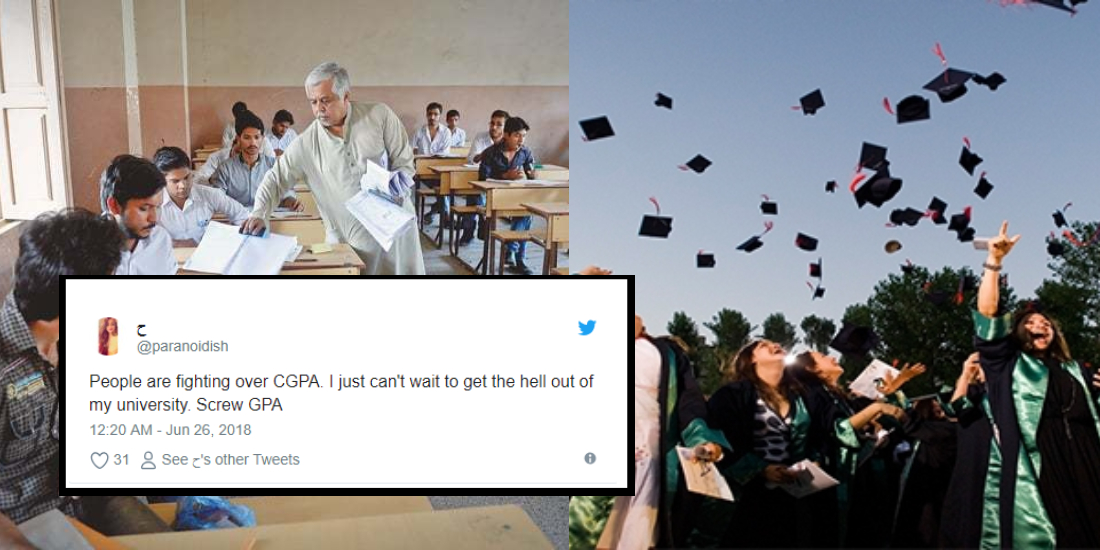 So in between the various school of thoughts of whether or not GPA matters, the innocent students are stuck in the middle of nowhere. There are freshman year students who are made to cram the mantra of “GPA is your life” are stuck between the new system of university and evolving social life. They are constantly made to feel inferior as they do not have a social life and at the same bashed by the family for lower grades.

Twitter recently got into the same situation where some people were all pro GPA and others were averse to GPA. And it got people confused who to listen to and who not to!

The debate on GPA turned into a trend and EVERYONE seemed to be talking about it!

Others gave examples of how people with less GPA can take inspiration from Maryam Nawaz. Wut even?!

Maryam Nawaz is a living proof of the fact that GPA Doesn't Matter. 46% pic.twitter.com/l5NQa3WJoM

Unless you have street brains, that GPA matters kids. Don't let nobody tell you otherwise.

THIS GIRL WON! She gave a witty reply to a person who claimed maths to be the holy grail of success

I have Dyscalculia,a math learning #disability which means my brain isn’t wired to do math.

Regardless, I always excelled academically&had strong leadership roles in in extra-curriculars.

Today, I write for 5 publications&am a #Journalist for a leading South Asian TV channel. https://t.co/x027W4CQoq

Hira quote tweeted to this guy who said that no matter what your GPA is, if you do not have good math skills, then sorry, you can’t see the face of success. Well, Hira said:

“His point, is invalid.

Here’s an article which I wrote while in 3rd year of my university (3 years ago) after discovering I had Dyscalculia; all a part of my epic and haphazard journey!

Unfortunately, this guy’s mentality is typically desi; people look down upon and shame anyone who’s not a mathematician, engineer or scientist.

Films like ‘Taare Zameen Par’ should seriously be made mandatory for desi families to watch to realize that there are so many more types of intelligence people have which allow them to truly shine.

If Albert Einstein can have Dyslexia and still be called the ‘Father of Physics’ then our desi people should never belittle those with learning disabilities.”

Another girl proved the math thing wrong and criterion of success

I failed basic math thrice in first year of my university yet I graduated with 3.2 CGPA and currently working with one of the largest companies in the country. Some people just suck at math. I am some people. ???? https://t.co/bvJG5TRyu8

We are just CONFUSED!!!

To be very honest! Do NOT take anything on your nerves. Be it grades or be it your social life. Try balancing and sometimes it’s okay if you lose balance. And yes! Never forget that “Luck favors the prepared” 😉 rest is up to you. Cheers 😉