Yasir Hussain Is Now Targeting Mahira Khan In Public And People Are Calling It Cheap Publicity!

Yasir Hussain is at it again with his Q&A sessions on Instagram and lo and behold, he managed to say something mindless to make it in the news, again. Someone is addicted to cheap publicity. Anything to stay in the limelight?

Let’s do a little recap, shall we? He joked about a sensitive issue pertaining to children on a national award show. Later, got into an online beef with Hania Aamir after taking a dig at her acne prone skin which she openly discussed in her heartfelt Instagram post. When he received backlash from the entire internet community on being insensitive, he went into a passive-aggressive mode resorting to sending silent messages. THEN, again made a crass joke demeaning transgenders.

That’s a lot of drama coming from a famous personality that has a decent fan following. His latest stunt now targets Mahira and honestly, at this point it does seems like a petty attempt at attention seeking. Really Yasir?

Yasir Hussain Is Asked To Choose Between Iqra And Mahira On His Instagram Q&A Session; The Answer To That Is Quite Rude.

He can’t pin this on his fans asking them not to ask controversial questions when Yasir has the choice to simply ignore them. So as the screenshot suggests, someone asked him a very simple and quite a vague question –“Iqra or Mahira?” 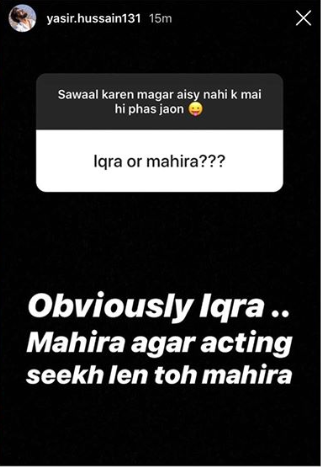 The answer must have raised several eyebrows. Although Yasir has deleted this since he must have realized the magnitude of stupidity he has committed. Choosing your boo over Mahira is all good and cute until you make an unnecessary comment and that too on Mahira’s acting.

She is a worldwide famous senior Pakistani actress that has worked alongside Bollywood superstar Shahrukh Khan. Nonetheless, Yasir is in no position to pass such remarks about Mahira Khan. There’s always a level of professionalism and mutual respect that is expected of them and Yasir has failed miserably at this.

Yasir Sure Got Attention Alright!

Point well made. He is not really in a position to speak about acting in any way or form, let alone comment on someone else’s, “and that too of Mahira’s”

Not sure what’s the deal with Meera Ji but agree with the rest. Mahira clearly doesn’t have time for pettiness.

Ouch! “All he roasts is his own reputation and senses”.

That’s all folks! Yasir needs to understand that at some point he will have to face grave consequences over his half-witted actions.

This Pakistani Molvi Was Arrested For Hanging Students Upside Down And Our Madrassas Need Regulation!
Frieha Altaf Is A Show Director At Lux Style Awards 2019!
To Top