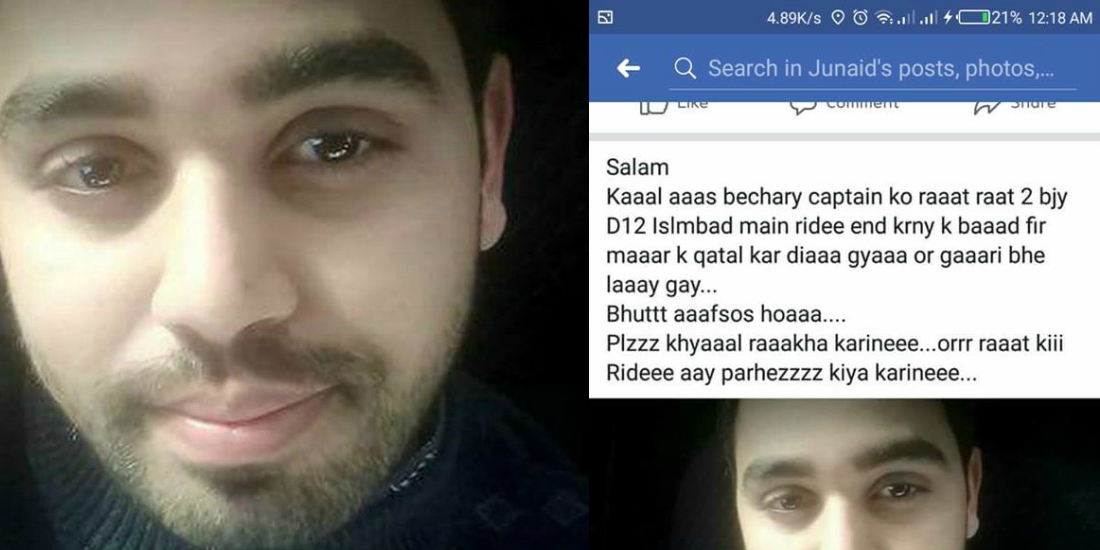 Private cabs have now eased life in most metropolitan cities which claims to provide safe, affordable and comfortable rides all across the city. Lahore, Islamabad and Karachi are their main markets. The citizens seem to have benefited from it fully as these cabs have now become the daily commute of many people. People now have options of the transports to choose from. Naming a few, Uber and Careem are currently the most famous transport companies that Pakistan has. Somewhere around March, 2016 Careem was the first private cab company to enter Pakistan.

On Thursday night, 22nd of February in Islamabad, a guy named Junaid Mustafa was shot dead while he was on his duty in his car under Careem as a captain. He dropped his passengers off at D 12 and was shot dead around that spot but the culprit is still unknown. Junaid’s cousin brother posted on Careem’s official Facebook about the incident that took place. The tragic incident that took place made a  24-year-old had to lose his life. It’s shocking to see how people have enough guts to go out and kill someone for any reason and they know that they’ll get away with it. Law enforcement in Pakistan is so weak that it doesn’t bother criminals to do such heinous crimes.

After which Careem took it to write officially about Junaid’s Death on their Facebook and Twitter accounts:

22nd February will be marked as an extremely tragic day for the entire Careem family. This day, our revered Captain, Junaid Mustafa, lost his life in an unfortunate shooting incident. At the time of the incident, Junaid was not accompanied by any passenger. Investigations by law enforcement authorities are underway to discover the cause of this incident.

Junaid’s loss is a terrible tragedy for his family and for the entire Careem network. Just like thousands of Captains, he too joined our network to chase his dreams, secure a better future for his family and earn an honest living. Little did he know that he would fall prey to the terrible lawless elements of our society. We appeal to authorities to take measures to ensure the safety of the lives of our citizens.

In this tragic time, we request you to please pray for the departed soul and his family.

22nd February will be marked as an extremely tragic day for the entire Careem family. This day, our revered Captain,…

Careem’s take on this incident is appreciable and the appeal to enforcement is important as to make a commoner’s life easy to live. So as other people who make their living by working late at night and risk their life should feel safe enough that justice is served and the criminals are tracked. May Junaid’s family and friends have the patience to bear this huge loss.