For Muslims, Shahadat ‘martyrdom‘ is one of the biggest honors one can attain in this world and hereafter. A shaheed is promised heaven with the highest honor and who wouldn’t want to attain such respect in front of the Almighty? Similar is the case in this story. It takes place in the beautiful valley of Indian-occupied Kashmir that has been a disputed territory since decades. Kashmiris in that part of the valley have been fighting off Indian military and their brutalities for a cause that they completely deserve; which is freedom. 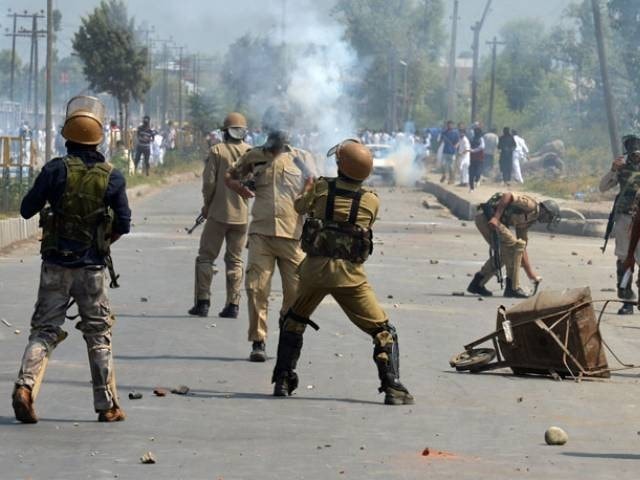 After Modi and his administration revoked article 370 that gave IoK special powers and rights, the Indian military locked the entire valley down, barring all sorts of networks including the internet and committing massive violations against human rights that no one can report. Their EID-ul-Adha was dark and gloomy considering the Indian military that is in thousands deployed there recently started using pellet guns blinding protestors. It is not surprising to know that some of the young adults have gone out to fight against the wrongful Hindu extremist rule, armed with guns.

A Video Has Surfaced Where An Indian Soldier Asks A Family To Ask Their Jihadi Son To Surrender, But His Wife Shuts Him With A Strong Reply!

The wife can be heard saying with a stern voice that he has gone out to fight in the name of Allah and he is satisfied. His wife who is filled with emotions tells the solider off when he asks her to ask her husband to surrender, to which she says that he will come home a shaheed and if he somehow comes alive, she will herself run a knife through his kneck. THIS is the resolve of a Muslim wife.

Here’s The Video Of The Brave Kashmiri Sister Reminding The Indian Soldier What Muslims Stand For And Above All- Kashmiri Muslims.

We hope that all the efforts of the Kashmir Freedom fighters, protestors and the PTI government in bringing the world’s attention to the atrocities committed by Modi and his Indian forces against innocent Kashmiris come to fruition. Amen!

Let us know in the comment section below what you think of this fearless Kashmiri sister’s reply to the Indian soldier!

Blast In Quetta Kuchlak Area Madrasa Martyrs Four, Injures More Than A Dozen
Bilawal Bhutto Gave An ‘Illogical’ Explanation Of The Past Rainy Days Making A Big Fool Out Of Himself!
To Top