Currently, some 22 pellet gun victims are being treated in the Maharaja Hari Singh Hospital, Srinagar.  Most have been blinded in one eye. Doctors fear some might have lost sight in both eyes. Indian army again used pellet guns on the unarmed protestors in the Indian Occupied Jammu and Kashmir. Some of them were protesting against the Indian oppression in the valley, while others were just attacked because they happen to be Kashmiris. 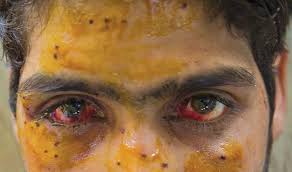 Not all the victims are protestors:

The hospital administration did not tell the real number of pellet gun victims brought to the hospital. But the doctors and nurses told the journalists the truth. They said 10 protestors with pellets wounds were brought in, on August 6th. While 7 others came in the next day. And, not all the victims were protestors.

This 16-year-old boy was going to play football when he was attacked by a teargas canister and pellet gun in the face. 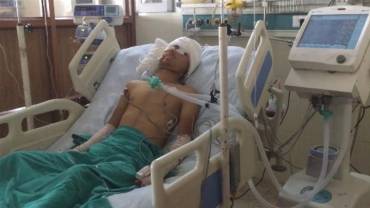 The Indian Occupied Kashmir has turned into a jail:

The Indian occupied Kashmir has been under unprecedented curfew since so-called democratic India scrapped off article 370. Revoking the special status of the state of Jammu and Kashmir. India is following in the footsteps of Isreal, who seek to annex Kashmir as Israel annexed Palestine. India is planning to populate the Muslim majority Kashmir with Hindus who would soon buy property there.

The situation is getting worse by day,  The UN Is Finally Intercepting India’s Evil Plans Of Altering Kashmir’s Status And Modi Should Beware!

Kashmiris are boiling in anger:

The dictatorial order has made people angry beyond fear. They have been living under surgency for 30 years now. Freedom is all they want. And they are ready to sacrifice everything for it. The situation now resembles a pressure cooker. The whole valley is under a communication lockdown. But wherever people see journalists they are eager to talk to them they want to be heard.

“protesters gathered by the thousands after Friday prayers & set off from a mosque in the #Kashmiri capital of #Srinagar, chanting slogans about freedom. Security forces told them to turn back, but they refused and sat down in the road…the firing began.”https://t.co/ItSismZ3Ch

The word of mouth is the only source of news these days. There is blockade everywhere and even to reach a hospital in an ambulance, people have to beg the troops to let them pass. Even though the whole valley is under curfew reports of protestors pelting stones at the army are constantly coming out. And the Army is using pellet guns to wound and blind the protestors.

There have been reports of a protester drowning, who jumped in the river to save himself when the Army was chasing him.

The video below sums up the situation in Kasmir

You might also like to read: DG ISPR Asif Ghafoor Warns India Of Not Hurting Kashmiris Or They Will Face The Wrath Of Pakistan!

There are absolutely no means of communications. India has practically turned the Jammu and Kashmir into a huge jail. And the oppression has sidelined the Kashmiris who believed in India. This is a genocide of Kashmiris in all its glory.

Guys this is happening right across the border. These severe human right violations are taking place in a ‘shining’ and ‘secular’ India. High time we all raise our voices. What’s your take on this?  Share your thoughts in the comments with us.

How To Be Careful In This Rainy Season- Deaths Caused By Rain Are Increasing In Karachi!
This Newly-Wed Bride From Karachi Trapped Her Husband, Stealing Rs 12 Lacs & Breaking His Teeth!
To Top