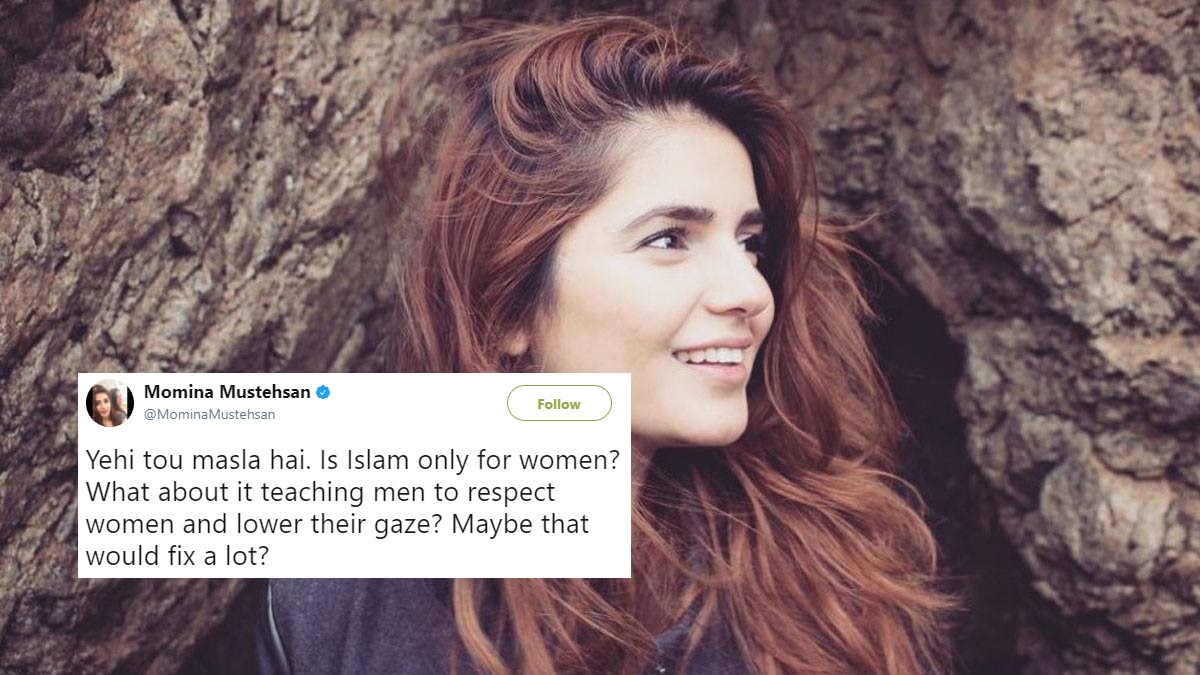 The highlight of last year’s Coke Studio – Momina Mustehsan. Since her debut in one of Pakistan’s finest music shows, Momina has been everywhere for all the right reasons. The very talented singer has given her voice to anthems and various musical performances as well.

However, with stardom comes a dark side which public figures often go through on the internet. Momina, alongside various other public figures, are often seen being bullied on the cyber space. For what reasons? Nothing, really.

The envious, intolerant behavior of social media users accounts to cyber harassment which public figures go through. In addition to this, women are always the target of this harassment.

These (& more) are #Pakistani #female #celebrities being abused online daily. Why do we put them down? My columnhttps://t.co/BjaFElSCAW pic.twitter.com/klMWem3trL

Momina’s name was on the list and the social media users are pretty aware of how the singer is often bullied on the cyberspace.

when an 18 yr old @MominaMustehsan sang Ghoom Tana with me in @nyuniversity , I knew she was going to be the next Nazia Hasan of #Pakistan https://t.co/PcNLZAmvGn

Being Extremely Out of Context, One Social Media User Shared his Notion about Pakistani Women Being Bold, to which Momina had a Fitting Response

I don't know what you mean by boldness. Empowering women means to give them the rights they deserve, which are equal to those enjoyed by men https://t.co/lXaFgLww3N

After this Reply, Another Social Media Male User “Conveniently” Brought Islam to the Discussion

If anyone would benefit from equal rights in urban Pakistan – that would be the male population. Separate female queues, skip the queue 1/3

Special 'family' entries, more tolerance and respect when on road, when dealing in govt offices and much more! Where do men get all this?2/3

And Look at Her Replies!

No offense, but separate queues exist not to facilitate women to reduce wait time but mostly to protect them from harassment https://t.co/MClxUjSvil

Yes females do need "more tolerance and respect on the road", because general norm: any bad driver is assumed to be female. Fair assumption? https://t.co/q2gmZ7qDzr

Does a woman walking on the road deserve to be cat-called? A man can go out alone for a jog. Tell me honestly:can a woman do the same in PK? https://t.co/q2gmZ7qDzr

Men Always Ask: “What About Men Who are Tortured by Women?” – Momina had a Reply for that As Well

That's not right either. Being an empowered woman does not mean u're superior to a man. What it means is that u're an equal: no less,no more https://t.co/BSG5cTOR9V

Very good point. Maybe this requires self-reflection: wht do majority single men generally do in malls? Sad tht all men pay price for it tho https://t.co/zjCsJ28Wwh 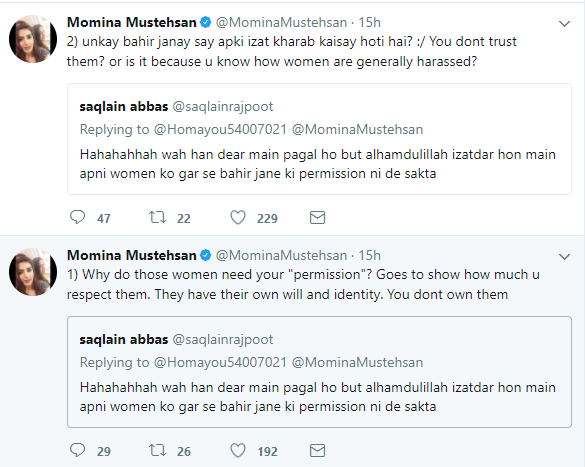 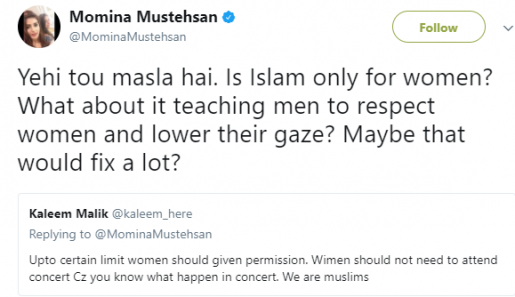 Regardless of what your opinion regarding Momina as a singer is, she just proved how great of a human being she is by showing her care for women empowerment.

When people like Momina show their interest in the welfare of the society, it sets an example. She is a public figure being followed by many – alongside the fact that she is a woman who acknowledges to the wrongdoing of this same society.