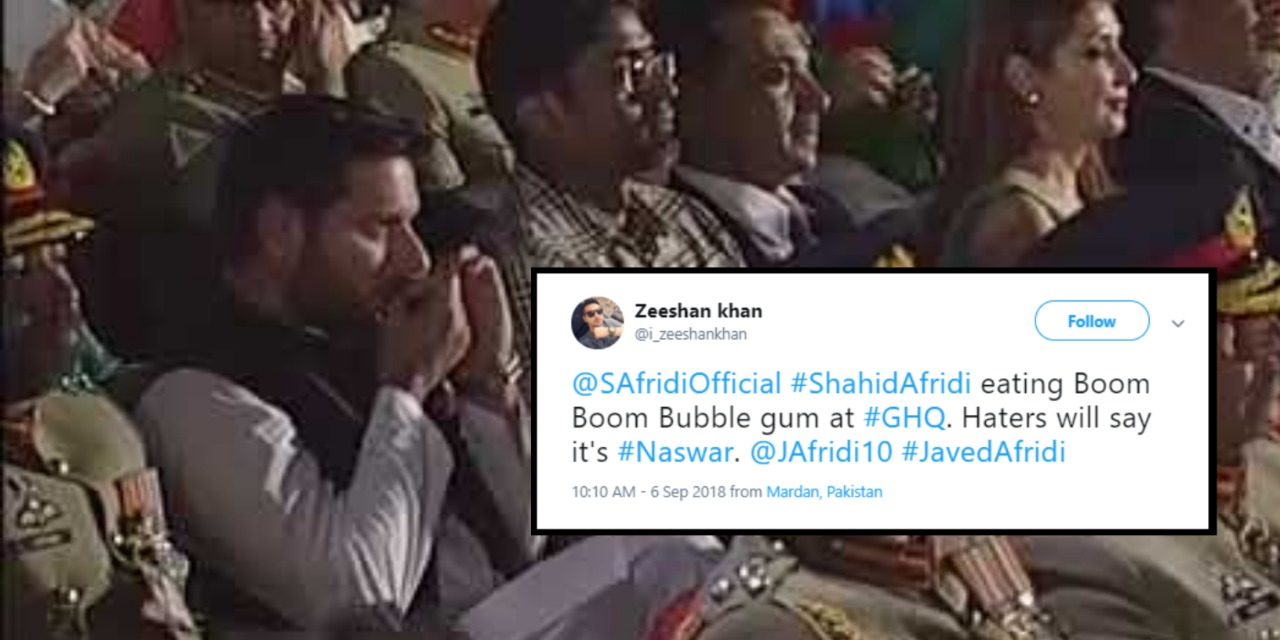 Boom Boom Afridi. Kids in Pakistan learn this name before they learn how to walk. Everyone in Pakistan loves the cricket legend and the cricket legend loves his country back. He made a name for himself in International Cricket (both as a very good and a very bad player) before his retirement from the National Team and his face is known by literally everyone out there.

However, he is getting famous for another reason altogether. Someone discovered a video which features Lala enjoying what seems to be naswar, a tobacco-based snuff commonly used in Pakistan. For some reason, people have taken a fancy to the video and are passing their own comments on it.

I’m not a Pashtun so it would be inappropriate for me to say that. But yeah, it’s nice to see that he’s just like anyone else out there.

Hahahahaha! For those who don’t get it, Sharjeel Memon had honey and olive oil in alcohol bottles present in his hospital room. I’m sure Lala could use the same excuse.

While everyone is busy watching the stories of martyrs, camera captured Shahid Afridi dropping in something on tv. Have a look. #PathanThings #ShahidAfridi #DefenceAndMartyrsDay https://t.co/JDvP1cQqXK

I understand why it’s funny but why are people pointing it out like it’s something to be shocked about? Afridi is a human being. A cricket legend who is loved by everyone, but still a human being. His actions should be no different from the rest of us.

Everyone needs their own methods of release. Some people make art or go to the gym. Some people do naswar. It’s a beautiful cycle, really.

This reference to Om Shanti Om really made my day. Thank you, Hanif Khan. You have a new follower on Twitter!

All things aside though, I hope all of you know how bad naswar is for you. I understand it is Afridi’s personal choice and he can have all the naswar he likes. But that is his choice to make and before picking up a habit that is bad for you, make sure you know what you’re getting into.

Indian Supreme Court Finally Legalizes Homosexuality And It Is No More A Crime
PTI’s Female MNA Trolls PMLN’s MNA On TV And “Uff, Khudaya!”
To Top