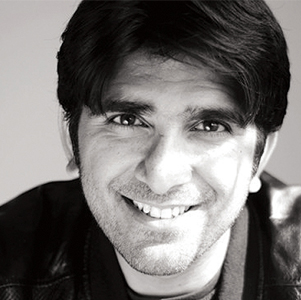 Ali Hamza is the brother of Ali Noor and both the siblings have changed the musical history of Pakistan. Inventive and a talented guitarist, Ali burst onto the Pakistani media circuit in 2002 with the arrival of Noori’s Suno Ke Mein Hoon Jawaan and advanced into our souls with his nervy smile, droll comical inclination witty meetings. His ability at the guitar have been vouched for by a huge number of fans crosswise over Pakistan and also the global group. Ali invests quite a bit of his energy venturing to the far corners of the planet alongside Noori, performing for Pakistanis abroad and advancing the music business. Regardless of whether on a CD or performing live, Ali dependably does as well as he possibly can to his music each time which is the reason Noori figures out how to make our hearts influence even 11 years down the line. Like we said a week ago, we may not go to all Noori shows but rather it’s alright inasmuch as we can get a look at Ali’s silly and ‘revved up and ready to go’ persona on TV.

With regards to Ali, there are not very many things that are not completely loveable. An inside and out decent person, Ali’s super cool disposition and vivacious identity seems to be certified and easy, conveying him nearer to his fans when contrasted with different VIPs. Actually, Ali is friendly to the point that his concept of the ideal enterprise rotates around anything that would include him to get to know individuals he has beforehand been inconsistent with!

As indicated by Ali, the most excellent thing about existence is life itself and he utilizes his very own background as motivation for his music. Ali keeps up an inspirational state of mind towards himself and administers to feedback and popular assessment. Ali Hamza admits that even though he had been education oriented, music was still more difficult than studies for him. He, in one of his interviews told: “Music is in my genes which came into me through my mother.” Ali Hamza’s mother plays a great unique instrument “Sagarveena” which was made by Hamza’s grandfather. She was also featured playing that instrument in Coke Studio Season 9’s most popular song “Paar Channa Dey”, however, Hamza also states: “My father has the best voice, actually, amongst all of the family members and my father’s grandfather was a professional musician”. Ali Hamza is a marginal compulsive worker, he invests quite a bit of his energy driving amongst work and home however the fun fellow in him wants to travel. His most loved occasion goal is Kabul, Afghanistan.

Ali’s most loved cooking is Pakistani. One thing Ali detests is thoughtlessness in individuals and concedes that he has little tolerance for it.

If we look at the early ages of the band Noori it can be found that Hamza left the band for a few years as he was also very passionate towards his studies and wanted to complete his degree from Lahore University of Management and Sciences. When he returned back to the band he brought great popularity with his charming persona. Noori’s collection, “SunoKe Main Hun Jawan” had built up a faction taking after before the collection’s discharge in 2003 through breaks on the web. “SunoKe Main Hun Jawan” offers a confused blend of sounds, beginning from a society like “Manwa Re” that was really composed for a Pakistani film, to hard shake songs of devotion to youth like the title track. Noori’s introduction collection made tornadoes over the Urdu talking group everywhere throughout the world. A first of its kind, it presented the class of popular shake music to the Pakistani standard.

Their second collection was a follow up on the latest relevant point of interest.” It discusses what happens when the lively and confident youth grows up and confronts the substances of the world. The uneasiness and enduring which emerges in this growing up, makes an unconcerned and narcissistic person, who discovers escape courses in things like medications and other brief joys. Noori’s second collection, “Peeli Patti Aur Raja Jani Ki GolDunya”, then again, begins off in a confident disposition and afterward goes through severe encounters and winds up with surrendered hope, peppered with taunts.

In 2008, after a rest of just about 2 years Noori returned with their new single “Do Dil”. Noori performed three see appears for their new collection Begum Gul BakaoliSarfarosh in Lahore, Islamabad and Karachi on the nineteenth, 20 and 21 September separately.

Ali Noor and Ali Hamza are without a doubt, the most praised artists on the last year’s Coke Studio. Subsequent to showing up on season two and three of the show as highlighted craftsmen beforehand, the siblings – who together shape shake band Noori – have made a phenomenal give back, this time as music chiefs. And keeping in mind that their most recent offerings from the stage, Baliye and Aaja Re Moray Saiyaan, manage the wireless transmissions, the dynamic twosome has been making more noteworthy arrangements. Actually, in Ali Noor’s own words, they are hoping to “change the fate of music in Pakistan”.

With that announcement, Noor alludes to Noori’s brainchild BIY Music – an activity to advance unique music the nation over. “You need to BIY (Believe in yourself) to DIY (Do it yourself),” says the artist, clarifying the name of his record name.

“Activities like Coke Studio and Nescafe Basement are authorized tasks so we needed a place we could use as our own stage and are endeavoring to build up that.”

Also Noori won a lot of awards when Hamza was a major part of it.Noori always came up with songs that were different and unique in their own way. People always cherished the combination of Hamza and Noor. They truly deserve the appreciations and awards that they received throughout their whole music career. These awards include:

THIS IS NOT IT

Aside from Coke Studio, Noori’s most recent work additionally originate from generally new music indicate Cornetto Pop Rock, wherein the band has teamed up with artist QurutulainBalouch (QB) on a melody called PyarWyar.

“This was QB’s first venture; the primary tune she thought of herself. Presently, we will create it facilitate, alongside her,” shares Noor. An in the background video on Noori’s BIY Music page indicates Noor and Hamza’s consolation and course for QB, the aftereffect of which is an important, unique song. The coming days will likewise observe the band work with Azmat.

With such a great amount on their plate, Noori wishes to make a crescendo impact and urge other Pakistani craftsmen to make unique substance. Truth be told, it was with this point the band thought of Aja Re Moray Saiyaan, a melody composed by ZehraNigah that elements Zeb Bangash.

“The tune had been with us for 20 odd years yet we continued backpedaling and forward with it. The genuine credit goes to Bilal Maqsood, who truly helped us set up it together,” says Hamza, who likewise loaned vocals to the melody.

His child has additionally sung the number in a home video that as of late circulated around the web. “I think my child feels he’s a star in his own privilege. As far back as that video went up, he acts like a demigod and even has the mentality! He has a decent personality for music and makes his own verses and tunes as well.”

Baliye, then again, is the combination of a unique track composed and formed by vocalist Haroon Shahid with a MusarratNazir great, LaungGawacha.

“All our different melodies from Coke Studio are firsts, in spite of the fact that the show’s arrangement is to work with existing works of art,” uncovers Hamza. The team imparts that they turned out to be agreeable to Strings and constrained them to get included. “We were working more as authors and they were doing the creating. We made melodies without any preparation on Coke Studio, alongside Strings and the house band. On the off chance that there was one thing I could detract from the experience, it would be creation,” he includes.

Pakistanis are very much fond of the duo and expects much more of it. As the music industry of Pakistan is evolving with the evolving world it demands more musicians like Ali Hamza so the pop music and culture of our nation can be spread far and wide.

Miss Veet is a popular super model contest in Pakistan that introduces beautiful, charming and talented female models to the fashion and entertainment industry of Pakistan. It provides girls from all over the Pakistan a platform through which they show their talent and flaunt charismatic beauty in a race to win exclusive contract of playing Brand Ambassador along with hefty prize money.

Noori joined hands with Sarah Haider in releasing the theme song for Miss Veet Supermodel 2016 with a revised version of their existing song “Dil Ki Qasam”. The song was produced by Shani and a famous music director and singer ShujaHaider. The song featured the participants of the contest along with the jury in an absolutely happening video promoting feminism and reflecting encouragement for the girls who have bigger dreams to achieve but are victimized by societal barriers.

Ali Hamza’s female fans will envy knowing that he met his wife Nafisa Khalid in one of their mutual friend’s wedding where they clicked and started their journey of love that is still on the go having two children, a son and a daughter. In an interview, when questioned about him being unsure about his music career till he met Nafisa, he endorsed that saying “She has been brought to this world to give me perspectives”. NafisaKhalid also expresses her satisfaction and delights about sharing her life Ali Hamza and calls her a perfect lover, a perfect husband and a perfect father of her children. Ali Hamza quotes that he improves as a person day by day and also adds “Whatever I am as a human today, I accredit the 40% part of it to Nafisa and the rest 60% goes to my kids”.  Ali Hamza and Nafisa Khalid have a son named Zaid Hamza and a daughter named Heer Zoya Zehra