There are occupations that require one to serve the general public by placing their own life at stake. They do not belong to the armies of their countries but in fact to organizations like fire brigade departments, rescuers and bomb disposal squads. These jobs require a strong dedication to save human lives at any cost, even at the cost of their own. These brave soldiers of humanity are selfless, resilient and possess a strong resolve that is unwavering.

Pakistan is not short of these heroes, although mostly undermined by the people and their efforts overshadowed or easily dismissed. However, there is a story that needs to be told. A story of putting others ahead of your own loved ones out of duty, honor, and principle.

This Rescue Swimmer From 1122 KPK Kept Searching For Three Drowned Sisters In Kundal Dam And Missed His Very Own Sister’s Funeral Back Home.

Zahir Shah has set a high bar and a great example for everyone that plans on joining this field. Not only he is an inspiration but has proved every naysayer in Swabi and the rest of Pakistan that question their credibilities and performance, wrong.

He busied himself in search of three drowned women who are sisters of another man while his own passed away and her funeral awaited him. His duty and dignity were enough of a reason for him to make this choice. 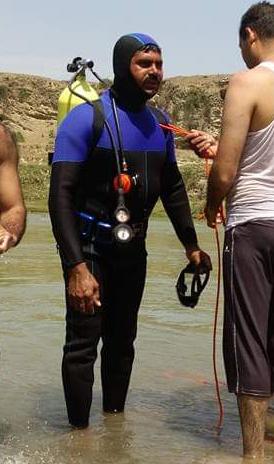 Rescue 1122 KPK shared this amazing story on their twitter account and he truly deserves a mention, not just by his own organization but by publications as well. Pakistan’s been cursed with incidents that are discouraging and disheartening and we definitely need to highlight the good that is being carried out as much as we can.

Such Diligence And Sacrifice Overwhelmed Pakistanis.

Absolutely, in this age of utter selfishness and personal interests, it is truly commendable and a rare sight.

You are the man, my heart goes out for. Stay blessed hero, in this selfish world of cowards, you are a brave person.

Such recognition is in order.

Govt must give him award/shield plus some financial reward also

A valid point and Zahir Shah’s efforts along with other heroes’ should be brought to the mainstream media.

@siasatpk @SdqJaan @Shahidmasooddr @SHABAZGIL @Haqeeqat_TV we have HERO every where. it is just for us to see. you very rarely find them in top class it is normaly among us doing their work for common man and they are the reason ALLAH Bless our country

Also Read:  Meet SHO Malik Jabbar — A Policeman Who Took Care Of Two Orphans After Their Mother Was Killed!

These stories keep the sanity of a common Pakistani alive and have definitely given us hope to a future that is uncertain. Have any positive stories you want to share? Comment below!

A Special Court Has Rejected Pervez Musharraf’s Plea For High Treason And The Ex-President Might Be Next!
Meet Billionaire Tony Khan – A Young Man Eyeing The World Of Wrestling!
To Top