The brutal story of how a man beats his mother while his wife uses abusive language for her is going viral on social media. The girl, Zoobia Meer somehow manages to upload the video of how her mother was beaten incessantly by her brother for money, according to some reports.

The poor mother, Gul Naz Bibi, finally broke her silence on the matter and spoke about how this isn’t only about money now; rather her son has been beating her and her twenty-year-old daughter for a long time now. Speaking to a local news channel, the mother says her daughter-in-law is mentally ill and tries to make sure that her husband stays outdoors. In addition, she is also using medication for her mental illness.

Bibi adds her son Arsalan is more than often beating them for unknown reasons on the statements and allegations put on them by his wife. She claims this isn’t a beating she received due to a matter of money and wealth, but this is something that is becoming common and has been going on for a while now.

The mother mentions about 30 people from her daughter-in-law’s family that came to her house. In addition, Bibi says her son is doing everything on what his wife is telling him.

“Bisma is a greedy and mentally sadistic woman. My son never used to be like this before. My heart breaks to see him act in such a despicable way,” said Bibi.

She wants her daughter-in-law to be punished for ruining their family and all the relationships. Even Meer has spoken about the tortures her brother has caused and how they were rescued by the neighbors after being incessantly beaten with a ‘wiper’.

‘Not an issue of inheritance’

Bibi clarifies that this isn’t a case of inheritance and that her daughter in no way is propagating. Rather, both mother and daughter have had enough of this brutal behavior and treatment and wish to get justice for the wrongdoings. As if that wasn’t appalling enough, even Meer’s sister-in-law, came forward with another video and claimed that Meer is a liar. 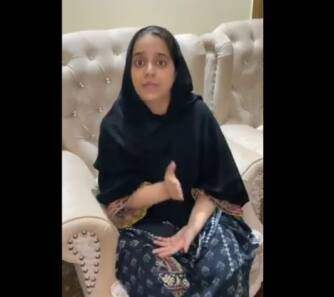 Bisma, Arsalan’s wife, has mentioned that the entire family is after her husband’s money and that they are being framed by them. Nor is she sorry or ashamed of their actions. Later on, Bisma also adds that they are not scared of Meer and her family, rather this is just a publicity stunt by the family and she even calls out her mother in law for hitting her.

Both man and wife, have fled the house and no one at the moment knows where they are; an FIR is registered and the police are doing all it can to arrest them.

Above all, it is extremely heartbreaking to see such an insensitive and brutal act, regardless of the reason. A mother is the most beautiful creation of Allah, and to see such a harsh reaction is undoubtedly breaking everyone’s hearts. We hope that justice prevails and all those who were a part of this inhumane and extremely violent act get punished for their wrongdoings.