'Zombie Angelina Jolie' Is On Ventilator After Contracting Coronavirus

Iranian Youtuber Sahar Tabar is reportedly seriously ill after contracting COVID-19. She is said to be on a ventilator in Iran after catching the lethal virus in prison.

Known for being actress Angelina Jolie ‘Zombie’ look-alike, Sahar Tabar’s real name is Fatemeh Khishvand. The social media star shot to prominence after posting images of her eerily gaunt face. She is currently serving prison on charges of posting blasphemous and violent activities on Instagram.

Iran has so far released about 85,000 prisoners to stop the spread of the virus in prisons. Tabar lawyers have also argued that she too should have been released. According to the US-based Center for Human Rights in Iran, a request for bail has been denied. Tabar has now contracted COVID-19 and is believed to be on a ventilator. 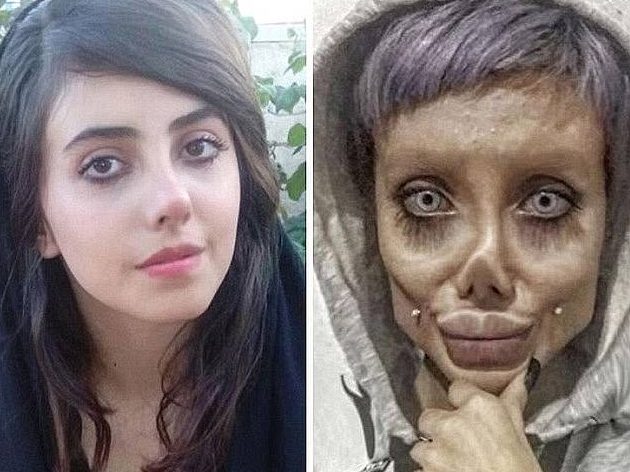 “We find it unacceptable that this young woman has now caught the coronavirus in these circumstances while her detention order has been extended during all this time in jail,” said Human Rights lawyer Payam Derafshan.

Iran has faced increasing scrutiny over its handling of the crisis. Derafshan added that authorities have even tried to deny that Tabar has caught the coronavirus.

“It makes no sense to deny this. The prison director should acknowledge the infection and admit she has been hospitalized,” he added.

Also Read: A Woman Lost Her Life After Cosmetic Surgery Went All Wrong And It’s Scary!

The Iranian social media star shot to fame in 2017 after she reportedly had 50 surgeries to make her look like the Hollywood actress Angelina Jolie. She had achieved her look through make-up and editing.

In October last year, Iran’s Guidance Patrol had arrested Tabar. The Iranian Guidance Patrol is a part of law enforcement in the country. It arrests people, mostly women, for not following strict conservative dress codes. The charges against Tabar included the incitement of violence and gaining income through inappropriate means. Following her arrest, she expressed regret over her posts during a state television interview.

Reham Khan Claims She Knows Why PM Imran Khan Was Crying
Fears Of Controversy Stop Me From Teaming Up With Sania: Aisam
To Top