We have seen a number of Pakistani entertainers who developed their careers by availing the opportunities from film industry of our neighboring country. While there is no harm to open doors to such chances in terms of developing their career, many entertainers rejected offers from Bollywood as well.

A lot of Pakistani entertainers are approached to play certain roles in Bollywood films or to produce/sing a song. Shockingly, Pakistani model-turn-actress Zhalay Sarhadi was approached by Bollywood to play Priyanka Chopra’s body double.

In an interview, Zhalay expressed the time she was approached by Bollywood industry:

“I started working the same year that Indian channels got banned in Pakistan and Priyanka became Miss World. I remember, I was hosting a show back then and everyone thought it was Priyanka and not me. It’s been this way ever since that time. I bet even Priyanka knows about me by now.” – said Zhalay in a joking manner.

While the confusions and comparisons between the two were at a peak, Zhalay shared how once her Indian co-star shared her images with his Indian friends and agents who then approached Zhalay to play Priyanka’s double. In her interview she had with Express Tribune, she shared “The agent asked him, ‘Who is this? Priyanka ki cousin aisi tau nahin hai.’”

Come to think of it, there are some similarities between the two… 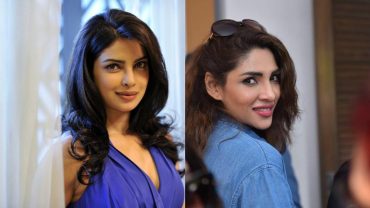 The Indians however, didn’t take the comparison well.

Sure can be said how Indians cannot see Pakistanis appearing on their newsfeed through the comments here.

With Zhalay’s new film Chalay Thay Saath which is set to release on 21st April here’s to hoping it will be a pleasure seeing her debut Pakistani film.

This Graceful Pakistani Man Shares Why He Left The USA To Return Home For Good!
You Have No Idea How Much These Top Pakistani Celebrities Are Reportedly Being Paid!
To Top