A hero for one is often the villain for someone else. That is exactly what has happened on Twitter today. While a trend from PPP followers under the tag of #HaqZardariSachZardari was in full swing. Ex-President Asif Zardari became the talk of Twitter for another reason. A Twitterati praises Ex-President Zardari and the locals of Larkana are now feeling offended

A very influential Twitterati with almost 100k followers, Meena Gabeena, stirred controversy, after she made a tweet. The said Twitterati is always seen making progressive tweets, and also voices for the unheard as a social activist. But this time this Twitterati touched the strings of some Larkana locals with her praises for Ex-President Zardari. 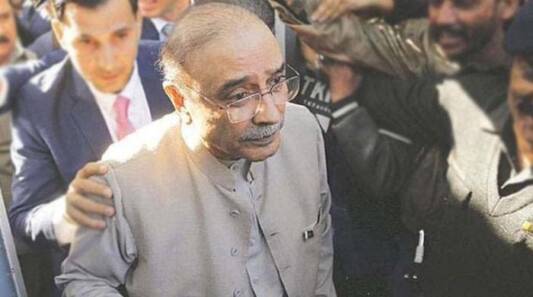 However, today, her tweet garnered lots of averse attention, where people did not agree with her narrative. @Gabeeno went on to tweet: “I had a chance to meet the former president and the best president of Pakistan in my life last year and he was so humble & down to earth .. he offered condolence for my father in such a compassionate manner .. I’ll never forget it #HaqZardariSachZardari #AbolishNab“

No matter what narrative has been spread against him, no matter what injustice he has suffered from spending years in jail without conviction , to losing his wife who is the leader of millions & getting accused for it .. he has given this country what no one else did!

In a second tweet, she wrote: “No matter what narrative has been spread against him, no matter what injustice he has suffered from spending years in jail without conviction to losing his wife who is the leader of millions & getting accused for it .. he has given this country what no one else did!”

Now, the topic of interest here is that the girl’s father was a retired Brigadier, who was being investigated by NAB. Late Asad Munir, a very prominent social figure, sadly committed suicide as he claimed he was wrongly being framed. Since Asif Ali Zardari has NAB tightening the noose around his neck as well, the correlation can be seen.

Since her tweet got viral, people who live and belong to Larkana started to show disgust. They became averse to her narrative and tweets for she had offended them. These people were of the opinion that a person living in Islamabad, with influence, should not promote a person who has wronged Larkana.

As someone who was born and raised in Larkana, I can't even begin to breakdown how much these tweets hurt. These people have robbed off and starved Sindh. May God make them and their supporters suffer every pain they have brought about. Ameen. https://t.co/6Sbx9JEtIQ

This girl, among many others, called out @Gabeeno for her marginalized and biased tweets supporting Asif Zardari. Since then, many others have called the late brigadier’s daughter out as well.

How Besharam you are

And so you deny all his systematic destruction of Pakistan because he offered nice condolences. Btw, you were actively involved in the water provision scam.

I thought you were a progressive account and I agree with a lot of things you tweet but that hashtag is glorifying a dynastic politician who is known for being corrupt.

I pray for you to cross Karachi Toll Plaza and visit either of Dadu, Khairpur, Larkana and many more districts. The best president in the country eliminated one of the most popular political dynasties in the world by loot and plunder.

@gabeeno sneak peak of the work your humble president did. So you might want to shut the fuck up if your kid hasn't died of rabies because the vaccine wasn't available in the nearest hospital which btw was an hour away. pic.twitter.com/TVhx2L7OLM

It seems like this particular case is one of ‘to each, their own’ where some support the narrative of Zardari being a great leader, while others do not. The consensus, however, is against the PPP Chieftain and his reign for the condition of Sindh.

People claim that Zardari ruined Larkana, looted Sindh, and the rest of Pakistan which is quite a common thought. However, these are just opinions of different people of Sindh and the country. With NAB scrutinizing the ex-President, only time will tell what the courts of Pakistan think.