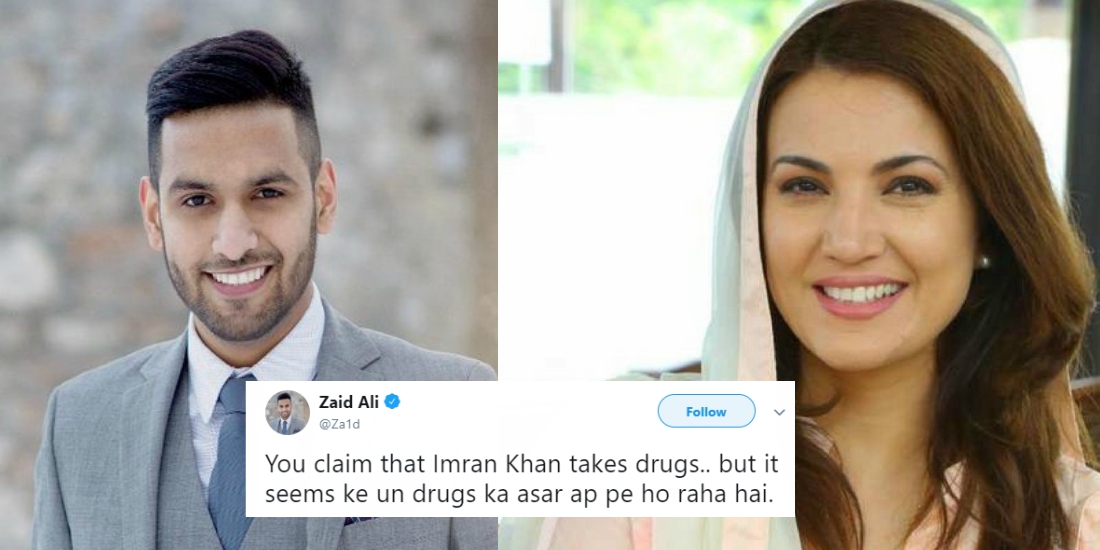 These two people have nothing in common at all. It would be hard to think of a scenario where both of their lives or interests overlap, right? But surprisingly, they’re having a showdown on Twitter. And a pretty intense one at that.

Zaid started the confrontation. He posted the following on Twitter on 3oth July:

Ouch. That was a bit uncalled for. I understand why some people tend to dislike Reham Khan. But saying that you’re praying to God for something like this is very mean. We all don’t want negative people in our lives but we don’t have the right to badmouth others unnecessarily either.

Reham Khan saw Zaid’s comment and replied to it.

My sincere dua is that you never have to live with a drug abuser & a cheat. I did & covered up until I found out he was cheating those who had voted him. Pakistan comes first. https://t.co/2193EkdJSU

Reham Khan’s tweet was much milder in comparison to Zaid’s. She didn’t attack his personality or character but tried explaining why she said what she did. However incorrect she is about Imran Khan, her reply was dignified.

Zaid’s reply this time was better. This time he criticized Reham Khan for her words about Imran Khan.

It’s hard to decide whose side to take. Reham Khan is wrong for saying those things about Imran Khan. Zaid is wrong in attacking Reham Khan’s character. It’s a complete fiasco, and people on Twitter have started taking sides.

This is rude. No human beings are lesser than each other and calling her a Peshawari chappal is disgusting.

This person really is oblivious. Say what you want about Imran Khan, he has made a lot of effort in order to win these elections. He was even campaigning more than 5 years ago. He is a self-made man.

What do you think? Is Zaid Ali in the right here or is Reham Khan? Let us know in the comments section below.

#AbAyegaMaza- The second teaser is out but people still don’t know what’s happening
LOL! This Condom Brand Tried To Mock Coke And People Are Not Having It!
To Top