When it comes to talking about comedy, Pakistan seems to have the lion’s share of comedians. Somehow, the name of Zaid Ali is always brought up. He is without a doubt one of the best Pakistani comedians and Vloggers that Pakistanis know. As a matter of fact, this famous YouTuber has won hearts with his charisma and notorious jokes.

Other than that, Ali is always sharing funny and interesting Vlogs with his fans about his daily lifestyle. The most inspiring aspect of his life is how he became a famous celebrity today.

This year on Bakra Eid 2020, Ali decided to go live with his fans and also invited his closest friends and family. Even famous YouTube star Shahveer Jaffery was invited.

Out of the blue Ali and Shahveer decided to test their popularity and see who is more popular.

The entire idea seemed quite interesting. However, Google’s response left everyone in tears – because no one could hold back their laughter after the epic fail.

Even Ali was seen laughing and feeling tad bit flushed at the incident. Here’s how he reacted to the entire incident.

In addition, what was the funniest thing was how magically Google knew who Shahveer Jaffery was. Now we don’t know about Ali, but that was extremely savage! For sure Google and Ali seem to have a rivalry of sorts, to say the least. 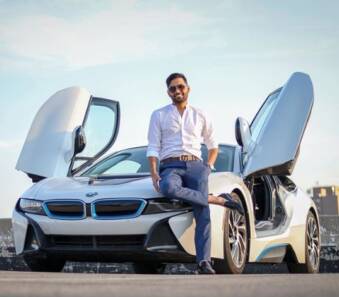 What might surprise you, is that famous YouTuber Zaid Ali used to be suicidal, but with the grace of Allah, he survived and became the amazing and loving person that we see today.

We truly hope that Ali has a classy counter-response to Google soon. And we keep on seeing his content. The star surely earned a lot of fandoms after he wished his wife Yumnha on her birthday and it was beautiful.