Back in the day, the rivalry between India and Pakistan in the world of cricket was beyond control. It was a matter of life and death for not just the cricket fanatics of the two countries, but also for the players of the respective countries.

There were players who were the ultimate terror to interact with on the field. For many players around the world. Shoaib Akhtar indeed ranked the list. The Rawalpindi Express managed to scare a number of players with his unreal bowling skills. Former Indian players haven’t shied away from sharing about the terror of facing Shoaib Akhtar.

There was a time when Akhtar jokingly threatened to beat the Singh duo. 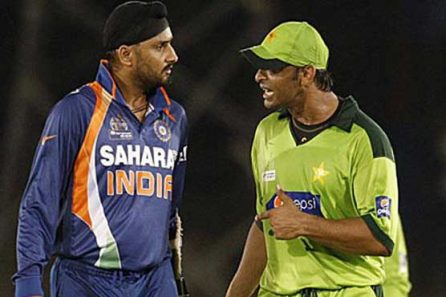 “Shoaib once threatened me he would come to my room and beat me. I told him to come, let’s see who beats whom. I was really scared. He is a great hulk. He once bashed me and Yuvi (Yuvraj Singh) inside a room. Since he was heavy, it was difficult to catch him,” Harbhajan said.

With All that Aside, the Former Players have Put the History Behind and this Recent Trolling Proves it!

So Shoaib Akhtar posted a motivational tweet for his followers. With him holding a helmet and wearing gloves, it indeed seemed kind of weird…

Only hard work can lead you to your dreams.#Shoaibakhtar #quoteoftheday #hardwork #dreams #nevergiveup #Rawalpindiexpress pic.twitter.com/bmtiom3WCY

He posted another similar tweet adding how this is all a joke!

And Both, Indian and Pakistani Fans Loved It!

What a great sight indeed – once fearless on the field, now trolling one another. Indeed the times have come off to be better between the former cricket players who scared the hell out of each other!

Wish to see more of this banter as it encourages such positive vibes between the game.

Anwar Maqsood Takes Digs at Nawaz Shareef in this Hilarious Poetry!
A 3-Year-Old Angel Died Because of the Carelessness of Doctors at a Famous Local Hospital in Lahore
To Top