Youngsters In A Land Cruiser Robbed Food From A Delivery Rider Worth Rs. 25,000 In Islamabad!

In the recent era when the advancement of technology has made humans lives easier in every way, some evil minds use it according to their personal benefits. As the masses of today are gradually moving towards a more easy stance, nearly every seven out of ten people prefer getting their food delivered at their place rather than actually going to the restaurant and enjoy the meal. Recently, an unusual event took place in Pakistan’s Capital, some guys in an expensive Land Cruiser ordered food from a well-known restaurant and then robbed it off from the delivery rider.

Boys from Islamabad snatched the food from the delivery guy and ran off without paying!

This incident was sure another addition to the ‘weird events’ list of Pakistan which needs proper assistance and permanent solution so that such issues don’t happen in the future. Earlier this year, another manipulative incident went viral on social media when two Pindi boys tricked the local police and received protocol to receive their father from the airport. Last week, on weekend, some of the youngsters from Islamabad ordered food of around 25,000 rupees from Salt ‘N Pepper restaurant and as the rider reached their address, they pushed him, snatched the food and ran away.

This is what the restaurant has to say on the matter!

According to the official post of Salt ‘N Pepper, the culprits ordered food worth thousands of rupees from the restaurant on Saturday. As the delivery rider Saleem Shahzad reached the destination point and called them, he was asked to wait for them on the road. After a couple of minutes, three guys in an elite Land Cruiser stopped by the rider and asked him to put the food in the back seat of their car. The driver thinking that he’ll get the payment after he’s done putting the food but as soon as those boys got the food, they pushed the driver and ran off without clearing the payment. 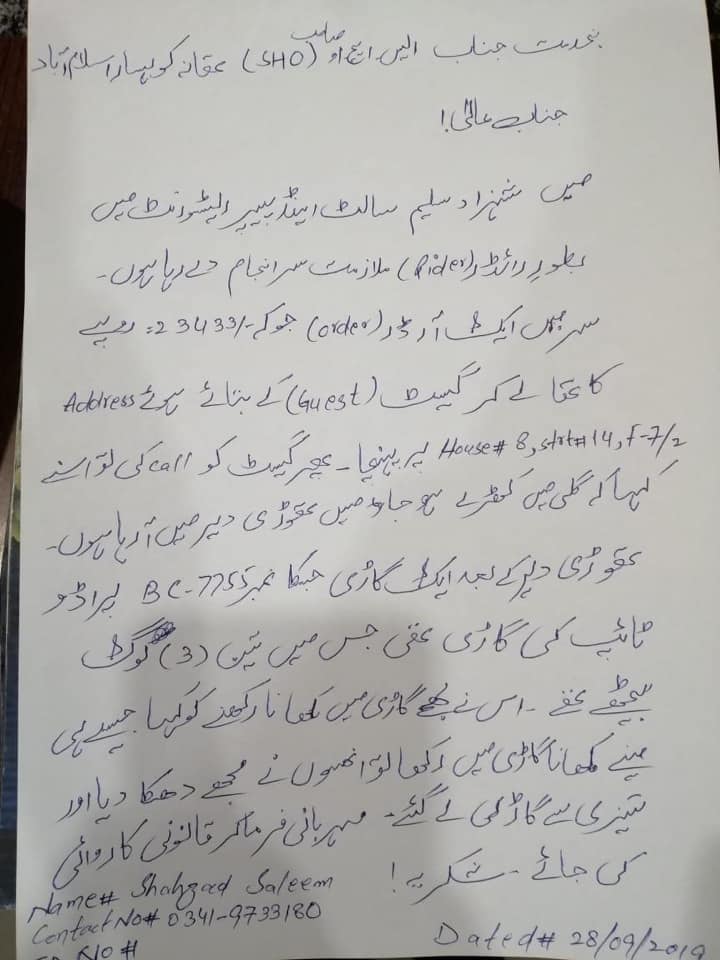 Check out: This Organization Has Launched A Food Service ‘Rickshaw Meherbani’ Filling Many Empty Stomachs Daily!

Luckily, the delivery rider even after being attacked was able to click some pictures of the culprits’ Land Cruiser which are now posted in the nearest police station. An official complaint along with proper details is also lodged by Salt ‘N Pepper’s management in the Kohsar Police Station of Islamabad. The restaurant in their Facebook post urged the concerned authorities to look into the matter and to make strict policies against such individuals.

Mehwish Hayat Clarifies Herself After A Video Of Her Refusing To Talk About Kashmir Leaked!
KPK Minister’s Rude Remarks On Doctors And Engineers Selling ‘Pakoray’ To Earn Has Triggered People!
To Top