It is not every day Pakistan get to celebrate such young minds with unlimited capabilities. Muhammad Shaheer Niazi is a fine example of such a fine caliber.

At a mere age of 16, he managed to achieve greatness in the field of physics.

His research came to light through his participation in the International Young Physicist Tournament in Russia in 2016, as one of Pakistan’s first participants.

Niazi went on to have his research published in the Royal Open Science Journal.

He became the youngest Pakistani scientist in the world as he found a way to photograph the movement of ions that form the honeycomb shape made when electrically charged particles try to pass through a pool of oil.

Age is just a number when it comes to such genius minds. Niazi was only 16 when his research was published in the Royal Society Open Science journal.

“Newton was 17 when his first research [paper] got published in the same journal,” Shaheer proudly said in a leading daily.

He also said that he received an email from a New York Times journalist referring to him as “Dr. Niazi”.

“I replied that I don’t know whether I can be called a ‘doctor’ because I am just a 17-year-old student. Nobody knew before this that I was just 17.”

“It was a very small thing, and only four to five research papers had been written on it, so I did not think it would get much publicity,” Shaheer said. 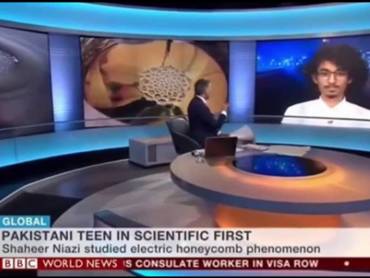 With such a tremendous breakthrough it was only a matter of time before he was flooded with recognition from all over the world. One such recognition came from Forbes.

Forbes is a global media company with interests in investing in technology, entrepreneurship, leadership, and lifestyle.

Forbes 30 under 30 is a prestigious list in which people with different capabilities are celebrated as young minds to look out for under the age of 30.

Niazi, who became the only man in the world to present such a breakthrough research, was later rejected from MIT, Harvard and other prestigious universities.

Niazi made the announcement via Twitter, saying that the rejection would not put him down and that he would continue to strive for greatness.

got rejected from MIT, Caltech, Harvard, Princeton, Yale and stanford. Sometimes life throws you down only to remind you how to get up again! #Pakistani #Nevergiveup

With hurdles along the way, Niazi remains focused on his one true goal. His ambition of winning Pakistan a Nobel Prize in Physics.