Pakistan over the course of its time has seen many ups and downs. Throughout history, our heroes with their tremendous achievements have contributed immensely to the advancement of this world. We as a nation have literally spent some glorious moments. On the other hand, there were some bad times as well. The allegations of terrorism and mountains of corruption had given us a bad name internationally.

However, that phase seems to be passing now. We are finally getting our act back together. The world also is not only just recognizing our diplomatic stances but also praising us for our achievements in the corporate sector as well. In the Agency of the year awards 2019, a Pakistani marketing agency known as Group M has earned nominations in three major categories. And we couldn’t be more proud!.

Back to inspiring the world yet again:

The Agency Of The Year Awards aims to celebrate the people, the work and businesses for their performances in the world of marketing. The awards highlight strong leadership, creativity and innovation, stellar business performances, development of talent, and contribution to the industry. The 2019 edition of the South Asia region Agency awards will be held in Mumbai, India. Now coming back to the nominations. The Ad agency from Pakistan which has scored big in the nominations is Group M.

Group M and its talented team of individuals:

Group M is known throughout Pakistan for its well-thought campaigns and quality of work. However, its outstanding standard is now garnering international appreciation as well. Their impeccable team has managed to get three nominations. This is a huge platform for an individual to be recognized. The Agency of the Year Awards is a 26-year long tradition that celebrates the very best in marketing. 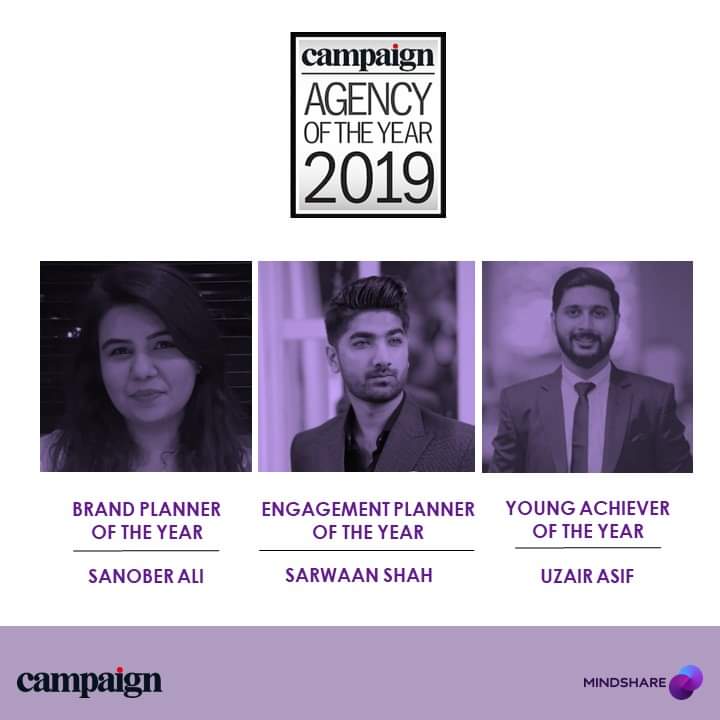 In the award for The Brand Planner of the year, Sanober Ali of Group M is nominated. Well, we all know that the standard of brands and image building is next level internationally. However, the concept of brands and even the tactics that go behind in creating a brand is kind of a new thing over here. Slowly getting its grip on the mindsets of our people. Group M and its talented team have always been at the forefront when it comes to detailed planning and skills of thinking out of the box. Throughout the year they have come up with fruitful strategies and campaigns that have performed way beyond expectations.

Moving on, in the category of Engagement planner of the year,  Sarwaan Shah is nominated. The world of marketing and advertising is a broad wide phenomenon. Probably the one thing that impacts the sales of a product more than any other factor. Having been recognized in 3 categories proves Group M is surely doing a lot of things right. And that we have finally arrived on the big stage.

While, in the third category of Young Achiever of the year, Uzair Asif is nominated. This is a very great sign for the future. This also shows the kind of eye Group M has for talent. It is the youth that is going to shape the future of this world. Having been appreciated at such a young age, possibilities are endless for Uzair Asif and including Group M. Note that Group M is the only Marketing agency that has been nominated along with its talented team from Pakistan.

These young individuals born and raised in this country are now making waves internationally. The sheer magnitude of their achievement and the talent that they possess. Surely have raised this nations heads with pride. As we look the world into its eye and announce that we have finally arrived. This is only the beginning. We are sure that the future is, even more, brighter than the present.