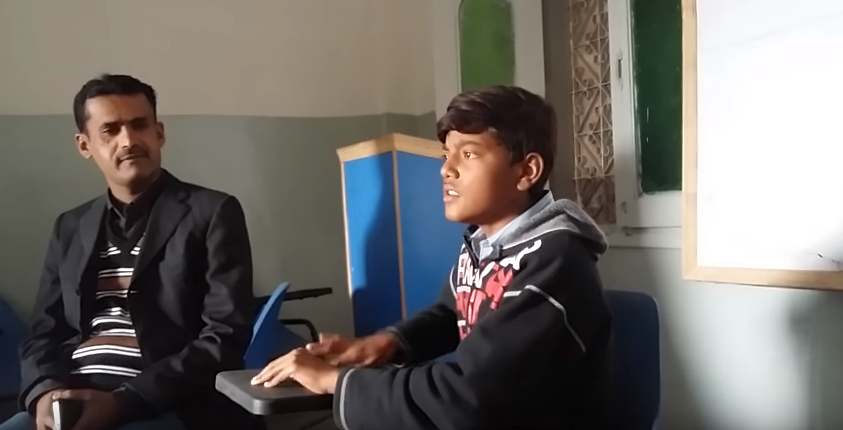 This is a story about a kid named Jahangir from Sukkur. He worked as an office boy and it all started when his boss uploaded a video on Facebook of him singing a folk Siraiki song Chitta Chola. The video got viral and his talent was appreciated by many but nobody even knew his name.

This was the first video of him that came on the internet:

Even if you don’t understand the language, the way he can sing is so powerful and clean that you can’t help but appreciate the beautiful singing and wish he doesn’t stop.

No matter how much you listen to this, you just want to hear more and more.

After getting some recognition, he was invited to perform at Lok Virsa – National Institute of Folk and Traditional Heritage. There, he managed to get a chance to display his talent for a larger audience.

Son of a peon, Jahangir never went to school and couldn’t read or write. However, he is now admitted to one of the best schools in Sukkur, courtesy of Mr. Rasheed Ahmed Mirani who is, in fact, his teacher and is bearing all his educational expenses. Talking to his teacher, he explained that he has learned how to read and write basic English. 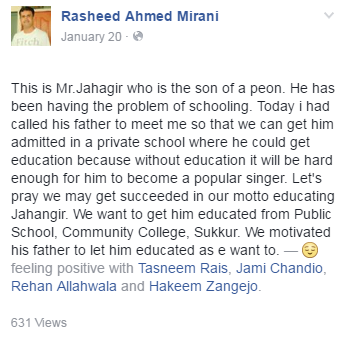 His teacher uploaded most of his songs on Facebook and his trying his best that he gets the recognition he deserves.

You bet even Arijit Singh wasn’t this good at this age.

Saawan Aya Hai by Jahangir. An office boy and a son of a peon. What a talent. #Sukkur #Pakistan pic.twitter.com/otrThkSeEL

He even gave Sajjad Ali some competition.

Jahangir Even Gave NFAK a Try

Well, of course, he kinda messed up the lyrics and can never reach his level. But watch out Farhan Saeed! We have a new bloke in town.

This kid’s voice keeps getting better.

Pakistan is blessed with a lot of talent and Jahangir’s voice is one of those talents that should not be ignored. Jahangir’s voice can shake anyone to the core and if Coke Studio or Nescafe Basement can give him a chance, he will Pakistan proud. not only Jahangir, there are hundreds of kids whose talent goes to waste because nobody is there to support him. Jahangir is lucky to have found someone like Mr. Rasheed Ahmed Mirani who is getting him education but

Not only Jahangir, there are hundreds of kids whose talent goes to waste because nobody is there to support them. Jahangir found someone like Mr. Rasheed Ahmed Mirani who is paying for his education but usually not everyone is that lucky.

You can listen to this all day and not get tired.

There are a few who are not excited for Eid…
Forget DSLRs! Have a look at Xiaomi’s Yi Sport Action Camera
To Top