Yesterday we came across a video shared on a page of a morning show. Where the usual stuff was happening, a panel of experts on board for discussions followed by a demo from yoga experts that any two people can do at home or a park. We saw that people had mix reviews on that video. Some had shared a view of how it’s a good practice and they should try doing this yoga under the assistance Yogi. Since it is not easy and you may injure your muscle.

But on the other hand, many people fully bashed it. In the comment section, it totally seemed two wings of the world like Amreeka and Russia. The fight was uncontrollable. The other side of the wing didn’t like the yoga for the very reason that how can two people of opposite gender do such astagfar poses?!

Watch the video yourself…

In the video, two people are doing a yoga much like Tantra. This is a yoga the practice by including your lover, friend or family member, in postures where breathing and moving together is key. And like Acro Yoga, couples yoga involves one practitioner acting as the base, and the other the flier. These roles ideally, are interchangeable.

So, much like any other yoga, this one is very normal. But people in the comments can’t stop labeling all the morning shows “Beghairat”. Some even stated how the two of them should get nikkah-fied after the show. 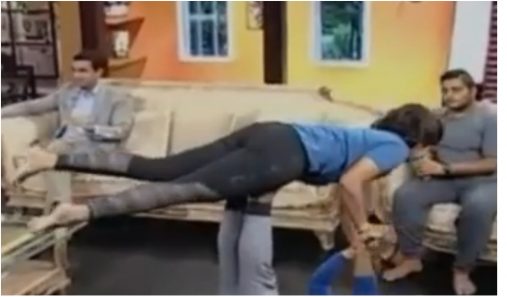 Even they declared this yoga the crucial reason for earthquakes. People stated how these morning shows need to be reminded that this is an “Islami Jhamuria Pakistan”. And the very famous statement that such activities are the reason which exploits people in Pakistan to do wrong. Some were calling this a “sexy” yoga.

These were the majority of comments that the video of this notorious practice got. What is your stance on this? Comment below to let us know and share your views.

On the 3rd Day of their Wedding, this Couple Decided to do something that others only wish for!
This Version of Multan Sultan’s Anthem is Hilariously Crazy and Deserves to be Made Official!
To Top