Yasir Hussain and Iqra Aziz are a popular couple that surprises Pakistan with their quirky ways every single day. People are also curious about their relationship status. However, Hussain has revealed that they might be marrying this year. 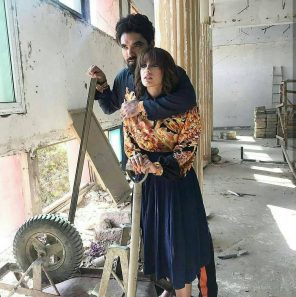 Everyone knows how active Hussain can be on social media especially Instagram. Well, a couple of users asked him simple questions to which he revealed the year of the long-awaited marriage. A question on his Instagram story asked whether the two will tie the knot in 2020. He replied back with, “Jee nahi 2019 main Inshallah” confirming that this year will be their special year.

When another user asked if they can be invited to the wedding, Hussain said, “Dulhan walon ne banday kam bulae hain pata nahi mai bhi jaon k nahi” his social media is full of playful remarks, to be honest.

It is still unclear whether the actor actually meant his claims or not. He tends to joke around quite a lot so this might be included in one of those pranks. However, we would like to congratulate Yasir Hussain and Iqra Aziz for now!

It is observable that 2019 really isn’t Hussain’s year at the moment. Probably because of his controversial nature and ability to trigger almost anyone. Even now, he is stuck in a controversy involving Mahira Khan where the actor dismissed Mahira’s acting skills. 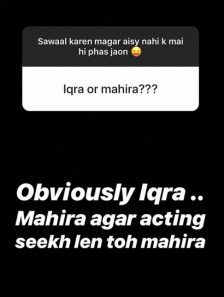 Not to mention, Yasir Hussain and Hania Amir went on bad terms after his remarks regarding Hania Amir’s acne. That had everyone shaking with anger as well. However, it is true that he does go overboard with his ways. And considering that his life is under the microscope for everyone to see, it is better to be less brutally honest. 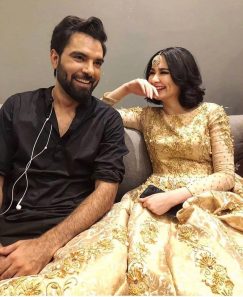 Regarding his comedic style, he mentions, “The type of comedy we have seen is of legends like Anwar Maqsood, Moin Akhtar and Umer Shareef. If you see their shows, you’ll feel they were all racist but that’s not the case.” Hussain also somehow drags the Oscars in there to make a point about hypersensitivity in people lately. He said, “We can wear backless at award shows but can’t take Oscar-level comedy,” It is still in the dark what both of the two things have in common, we’ll leave it to your interpretation.

If people find his jokes offensive then just like the platform he possesses they can address his blunt nature as well. Putting your life out there for the world always has its consequences anyway. Many believe he does what he does for publicity and social media seems sick of his latest joke as well.

This user is convinced he mentions controversial ideas for the publicity, “Said that before, saying it again! Yasir Hussain needs to stop being irrelevant. Harr cheez mein usko maslay karne hain. That’s a very cheap way of getting publicity tbvh”

Once again, doing it for attention, “Yasir Hussain says all that crap for attention aur tum log usko dete bhi ho wohi attention. Lmao, you guys are actually stupid in this case. Ignoring him is not a big task”

Yasir Hussain says all that crap for attention aur tum log usko dete bhi ho wohi attention. Lmao, you guys are actually stupid in this case. Ignoring him is not a big task #sorrynotsorry

Anyways, congratulation to the couple for their future marriage! Share your thoughts.