Pakistan vs India: 27 Hilarious And Witty Responses From Across The Borders 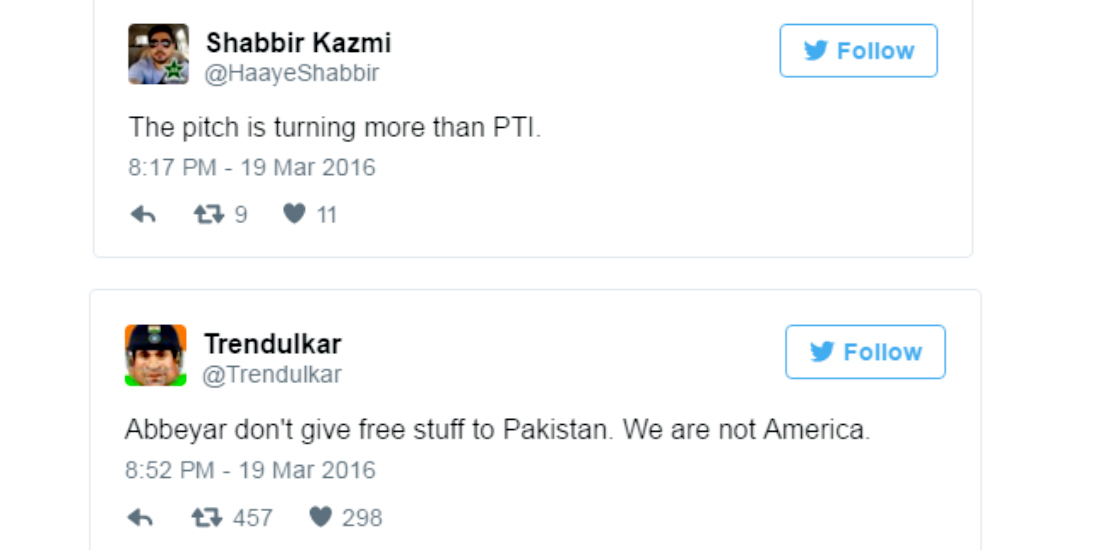 Even though Pakistan came just short once again to India – all was not lost. The Pakistani Twitter banter was at peak again, along with thorough and witty responses from across the border where the match was being played.

1. Whenever Pakistani batsmen hit a boundary, the crowd went silent – this lead to one Pakistan ranting out loud with his wit…

2. When the pitch turned more than Qandeel Baloch did in her teaser strip video..

The pitch is turning more than PTI.

3. With Sir Ravendra Jadeja and Ashwin spinning the ball on all ends of the Earth, imagine if India were playing Kachra… “Sasura phirki maaarat hai!”

4. Every single time Afridi comes out to bat, this is Pakistan summed up in one tweet: “Let it be Afridi’s day” – sadly, it never is..

5. When Ahmed Shahzad got out.. the wittiest Indian account on Twitter literally just destroyed everything Selfie built in his career..

6. When Pakistan started losing wickets and not making enough runs.. this Pakistani threw his heart out over the internet to watch it burn

7. When Afridi kept slogging at the ball, without any knowledge of where it would spin..

Afridi is playing like how we attempt multiple choice questions when we have no clue what the answer is.

Abbeyar don't give free stuff to Pakistan. We are not America.

9.  Better to play inside water than play at such pathetic locations.. poorly managed WCT20

This is a better pitch than the one we have at Eden Gardens today. #wt20 pic.twitter.com/SOze9ELPqT

10. When one Indian accepted the fact of how poor the Eden Garden pitch was..

Sorry, but such pitches are unacceptable for T20s. Such a shame #IndvsPak

This typical Indian pitch. If this pitch have face it probably look like this #PAKvsIND #IndvsPak pic.twitter.com/GiocHFrj4v

12. Rule 1: When there is a Pakistan vs India match – you do not go to the washroom during the innings, only when its mid-break

13. He caught Sania Mirza, then he caught the ball

14. Remember when Rohit Sharma said Aamir is an ordinary bowler? He’s got him out all 3 times in last 3 matches

15. There was a time when the match was going to be abandoned due to rain.. but then.. it didn’t 🙁

16. Pakistani cricket team could’ve been the cause of most alcoholics and suicides in Pakistan..

If it was allowed to drink openly in Pakistan, most of us would be alcoholics thanks to our cricket team. #PAKvsIND

18. Shafqat Amanat Ali ruined our national anthem – while Amitabh Bachan totally bossed his – we were bound to lose..

19. Imagine if Saeed Ajmal was bowling tonight – the Chakraview!

20. OH MY GOD, BIPOLAR PAKISTANIS AND THEIR EXCEPTIONAL SAVES!

21. When Amir bowls, the crowd stays silent – that’s how it is! Dehshat ki baat hai saari

24. Indeed, from one legend to a legend in the making

Sachin cheering for Virat from the stands. The beauty of sports.

25. When Shahid Afridi didn’t give Muhammad Aamir the overs in the depth..

26. Imagine if Dhoni had played like Misbah and realized the match was already over..

#IndvsPak
Moment Dhoni walked in Kohli would have told him, "Boss, don't wait till the 20th over. 18-over match."

27. And so it ended… Pakistan lose to India once again – Congratulations to the Blues!

Even though Pakistan might have lost another battle – the war is not yet lost! On we go marching!

8 Things Women Judge Other Women For
Presenting: “The Ghairatmand, Secure Mard of Pakistan”
To Top