Is this the world's first emo robot? - Parhlo 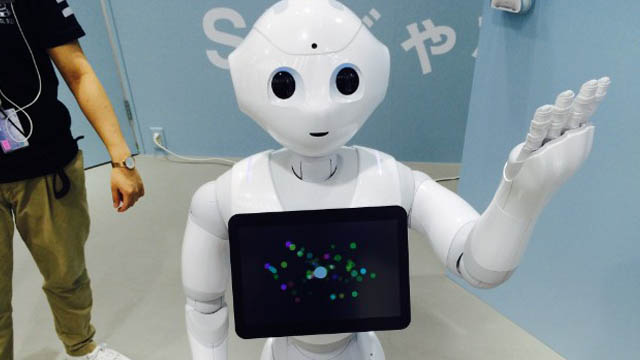 Ever feel like no one really understands you? Well “Pepper” could be about to change all that.

That’s because Pepper is actually a robot and touted as the world’s first with the ability to read emotions.

The humanoid robot — which looks slightly like a shrunken Michelin Man — was unveiled to curious onlookers in Tokyo stores on Friday by SoftBank, a Japanese telecom giant and Aldebaran, a French robotics company.

Pepper doesn’t look much like its name. Standing under four-feet tall with a tablet computer mounted to its chest, it has human-like hands and a mermaid-like lower torso â€” though its toddler-like voice seems incongruous with this state-of-the-art facade.

Despite the high-pitched voice, Pepper is able to converse about everything from the weather, to more sophisticated topics like the latest fluctuations in the stock markets. 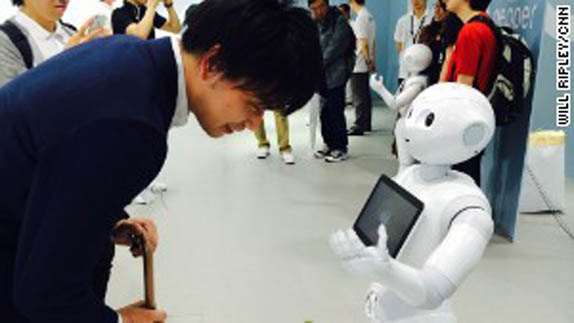 Yet the great differentiator is the fact Pepper is fully interactive, making eye contact when meeting people.

Pepper is “the first robot to read human emotions,” said Softbank’s CEO Masayoshi Son told reporters at a press conference in the Japanese capital on Thursday.

“Robots like Pepper are adding a new dimension in our daily lives. They would change it with the same magnitude as the PC, Internet and mobile phones did.”

How Pepper reads your moods

Using its emotion recognition functions, Pepper can react to people in its vicinity — making jokes, dancing and even rapping (in Japanese), as it did in an onstage demonstration on Thursday.
Pepper can analyze facial expressions, human voice tones and gestures, then react autonomously through algorithms, its creators say.

“Our vision is to create an affectionate robot that can understand people’s feelings. Then autonomously, it will take action,” said Son.

He envisions robots playing roles in education, healthcare and entertainment, but their primary goal isn’t to work in the industry like existing robots.

“Our’s is not aiming for productivity, but rather at the home or store, where we provide fun and entertainment,” Son said. 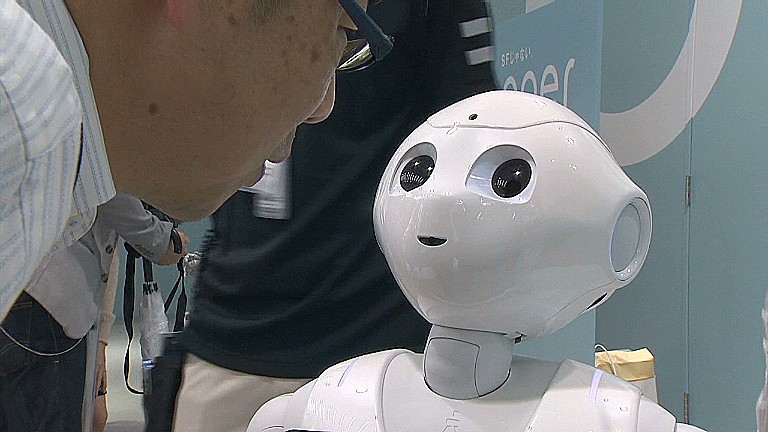 Pepper is designed to be a family robot — perhaps more like a sleeker version of Rosie, the household robot on the cartoon “The Jetsons.”

“Pepper is powered by love inside a family,” Son said. “Not only is he making jokes, making them laugh. The robot acts out at its own expense, in natural disaster, it can help them and also comfort those people who are sad or lonely, encourage them or make them laugh.”

When Pepper goes on sale

Pepper goes on sale in Japan for around US$2,000 in February 2015. For now, several Peppers are at Softbank stores in Tokyo for spectators to visit. The creators say before releasing Pepper for sale, they want the robots to accumulate more knowledge, to evolve and get more sophisticated in its interactions with humans.

“Several thousand Peppers are going to learn at the store,” Son said. “Everything they learned and gained, is going to be accumulated into the cloud-based service. So that can be accelerating the evolution of the collective wisdom.”

SoftBank and Aldebaran envision the robot being sold overseas eventually. After all, Pepper is quite the polyglot, speaking 17 languages.