Today marks a special day for Pakistan. In fact, this year so far has been great for Pakistan in terms of welcoming international figures in the country. The year 2017 started in full swing when the final of Pakistan Super League PSL took place in Lahore. We then welcomed international footballing legends who stayed and played in two cities of our country, Karachi, and Lahore.

Continuing what the officials started, a wave of happiness passed through every Pakistani when PCB announced the return of international cricket in Pakistan in shape of Pakistan Vs. World XI!

With a Mixture of International Players Coming to Pakistan, Every Cricketer Fanatic of this Country couldn’t be Happier! 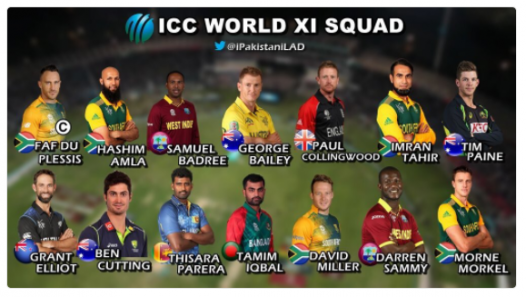 The cricket matches are taking place in the heart of Pakistan, Lahore – the same city where PSL’s final took place. Having this said, the officials have made sure to do everything, within their possible capacity, to hold these matches.

Look at the Arrangements in Swing!

Lovely and Nostalgic at the Same Time!

Final preparations are underway for tomorrow's first clash between Pakistan and the World XI in Lahore.

Players of World XI arrives at the hotel in Lahore. #PAKvWXI pic.twitter.com/NbcGQfc3fq

What makes this event even more exciting is that everyone, today, puts the differences aside and shares the interest for cricket only. They don’t bicker against Pakistan but share how prestigious this moment is – the moment we lost years ago due to unfortunate events.

Not Only Pakistanis but International Figures are all Geared up to See the Return of Cricket to Pakistan!

Faf du Plessis "In a few years time when I will sit with my family, this is something I can be really proud of" #Cricket #PAKvWXI

Leaving Trinidad today Thankyou @CPL – a memorable month in the Caribbean! Visa issue a problem for #PAKvWXI so no Lahore this time #HomeNow

Big day for cricket lovers in Pakistan. Hope the situation allows more teams to play there. Home cricket always has a different buzz.

Dean Jones Couldn’t Make it Either but His Wishes Matter!

I had signed on with Afghanistan CB way before the @TheRealPCB confirmed the dates for the World XI.
So enjoy the cricket Pakistan!!

Here’s to hoping everything goes as well as we all planned. It is indeed a proud moment to see how we will be achieving another important element which embarks the prosperity of our country.

Long live Pakistan – you have been through so much. And welcome international cricket. <3

The World Congratulates Mohammad Amir and His Wife Who Welcome a Baby Girl!
Here’s Everything You Need To Know About The Legend Behind ‘Geedar Singhi’
To Top