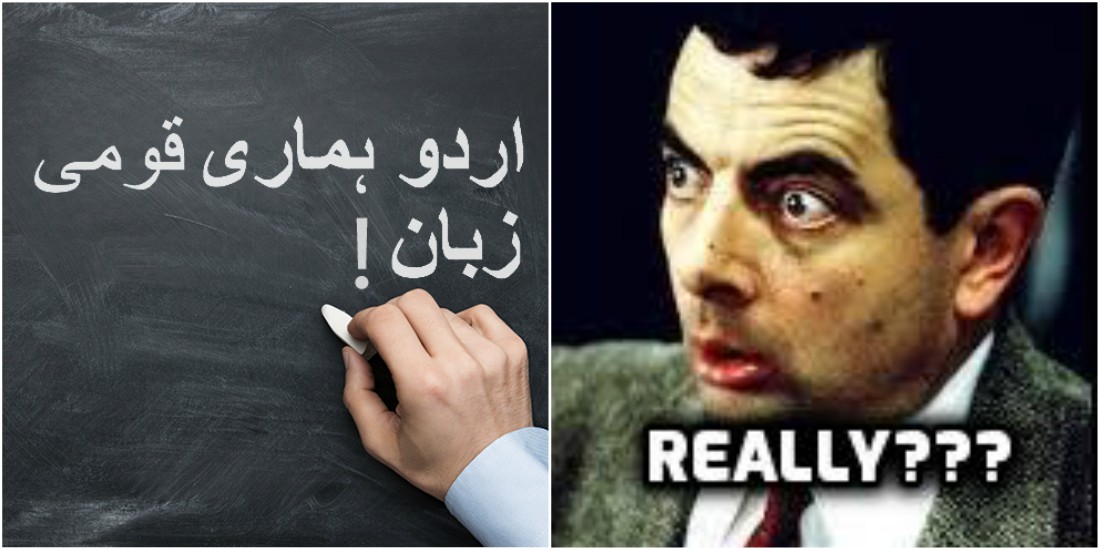 I have always been eager to gain some deep insights and forays into Qaumi Zaban (National language) of my country and simultaneously my Madari Zaban (mother tongue) Urdu so I have decided to write an article on the Urdu-Hindi loanwords in English which will hopefully surprise many of my fellow countrymen reading this article.

Today though sadly Urdu which has loaned words to Angrezi of Angrez and Goras is being seen by its own native speakers especially by many so called Burger and Mummy Daddy Bachas in Pakistan as a regressive and backward language which isn’t the language uttered in dialogues by Daenerys and Jon Snow in Game of Thrones or by Ryan Reynolds in Dead pool.

According to the so called Beliebersin, our society can’t find Urdu a cool or a hip language as they can’t find it in the lyrics of some over-rated Justin Beiber song. Many in our society especially in the “chic, cool and glitzy” upper Middle class and elite class take pride in speaking Far Far Angrezi and simultaneously have utter disregard for Urdu as a language which maybe isn’t adequate enough to maintain a distinction between themselves and their Kaam walis, Chowkidars and Naukers who may not be able to decipher and fathom the rapid stream of a foreign language (Well not so foreign for many in our country and it has become a Ghar ki baat kind of a thing for them) from their mouths and may actually mind their own small businesses without enjoying the gossips of  Fur Fur Angrezi Bolnay Waliaunties from their ears while doing Safai of their opulent bungalows.

Alas! this Marz of trying to ape Goras (even after they departed from the subcontinent by packing their Boriya Bistars and embarking on flights to Ingleestan in 1947) is also widespread in many middle-class logs. They think they may lag behind their elite counterparts in a competition to speak better Angrezi so they mount all sort of efforts to speak Fur Fur Angrezi themselves and also try to teach the same to their kids sometimes in a very absurd manner by adulterating some Urdu Jumla with some English word and having usually a copious blending of Urdu and English with phrases like “Apnay Hands dholo”(Wash your hands), “Quickly tiyar hojao”(Get ready quickly) and youngsters often do the same by uttering absurd sentences with such copious blending of Urdu and English such as “Chill karo”, “Scene on karo”, “Party Sharty karlain”.

A few days ago I saw a group of youngsters being interviewed by a local news channel reporter at Lahore zoo and the question that reporter asked from those bunch of youngsters was “App yahan akay kesa mahsoos kar rahay hain” (How you are feeling by visiting this place) and the retort to reporter by most of the kids from that group was “Hum bohat enjaay kar rahay hain” (We are enjoying a lot) which was again a copious blending of Urdu and English.

Well sorry for deviating a bit from the main topic of my article which is to divulge some Malumat (Information) about the Urdu and Hindi loanwords in Angrezi which will be quite astonishing for many who will read this article. Many of our very own Desi words from Chutney to Jungle entered English during the British Raj. These borrowings, dating back to the colonial period, are often labeled as “Anglo-Indian”.

Many of those who will be reading this article must have watched the famous 2009 Hollywood Sci-Fi Fantasy movie Avatar but do you guys know that the word Avatar is actually a Desi one, not a word Gorasalways had in their dictionaries. The word “Avatar” is actually from Sanskrit and it means descent of a deity from heaven.

Similarly, the word Bungalow is used for posh and big houses has its origins from our Baresagir Pak o Hind (Indo-Pak subcontinent) and the original word is “Bangla”  which means literally a house in the Bengal style.

Another word which we added to all the big fat English dictionaries from Oxford to Cambridge is “Blighty” which means Great Britain, especially as seen from abroad and it has its origins from Hindi-Urdu “vilayati” meaning “foreign”. The word “Blighty” was used as a term of endearment among British troops stationed in Colonial India from Peshawar to Madras.

The word “Cushy” (Easy, happy, soft) has its origins from our very own “Khushi”(happy).The word “Juggernaut” has its origins from Sanskrit “Jagannath” a form of Hindu God Vishnuparticularly worshiped at the Jagannath Temple, Puri, Odisha, India where during Rath Yatra festival thousands of devotees pull temple carts some 14m (45 feet) tall, weighing hundreds of tons through the streets. These carts seat three images of the deity meant to be brothers for a ‘stroll’ outside after the ritual worship session. They are fed by thousands and thousands of worshipers with holy food as if the icons were living.

Early European visitors witnessed these festivals and returned with—possibly apocryphal—reports of religious fanatics committing suicide by throwing themselves under the wheels of the carts. So the word became a metaphor for something immense and unstoppable because of institutional or physical inertia; or impending catastrophe that is foreseeable yet virtually unavoidable because of such inertia.

We have also loaned our very own “Pakka”(meaning cooked, ripe and solid) which we often use in our Mukalmaswith our Ammas after returning to home from schools, colleges and workplaces like “Ajj Kiya pakka hai amma khanay may”(What’s being cooked today mom) to British slang word “Pukka”(meaning genuine).And Aray yaar how can I forget our very own “Pajjama” which became “Pyjamas” in these big fat English dictionaries.

Even “Shampoo” isn’t a word owned by Goras in their English dictionaries since the very beginning but this word has its origins from Hindustani (Hindi and Urdu combined nowadays spoken primarily in Northern India) word “Champo”(Verb imperative meaning “to rub” dating to 1762).

Even “Jungle” wasn’t theirs, they stole it from our Desi “Jangal” which is another word for wilderness and forest. Even the English word “Typhoon” (a cyclonic storm) is from the Urdu word “Toofan”.Even the English word “Veranda” isn’t truly an Angrezi word and it has its origins from our very own Urdu-Hindi word “Baramdaa” which surprisingly itself had its origins from Portuguese as Portuguese had also been a prominent foreign language after English in Colonial and pre-partition India particularly in Goa.

I hope those who will be reading this article will find it adequate and informative enough to elevate their reverence for their Qaumi ZabanUrdu.