This Woman Finally Visited The Forbidden Land Of Jerusalem And Was Thrilled With The Experience!

Regarded as the Forbidden Land which has been referred as Holy Land in incidents that took place 1400 years ago, the Holy Quran mentions the term ‘Holy Land’ on seven different occasions. “Oh my people! Enter the holy land which Allah hath assigned unto you, and turn not back ignominiously, for then will ye be overthrown, to your own ruin.” – Hazrat Musa A.S calling to the Children of Israel (Surah 5:21).

Known as Al-Quds which means Holy, Jerusalem holds a lot of importance in Islam. While Islamic scholars debate on the exact ideologies and meanings 1400 years later, many believe that the “Blessed Land” was located in the lands of Jerusalem, the land between Euphrates and Al-Arish or the land of Jericho.

With the Pakistani passport that reads, “This passport is valid for all countries of the World except Israel”, Pakistan doesn’t consider Israel as a sovereign state. However, visiting the country which exhibits one of the holiest Islamic sites has been a dream to many; seeing Al-Aqsa Mosque located in Jerusalem is what many Muslims wish to see. Madeeha Anwar Chaudhry had this dream as well which she recently fulfilled. 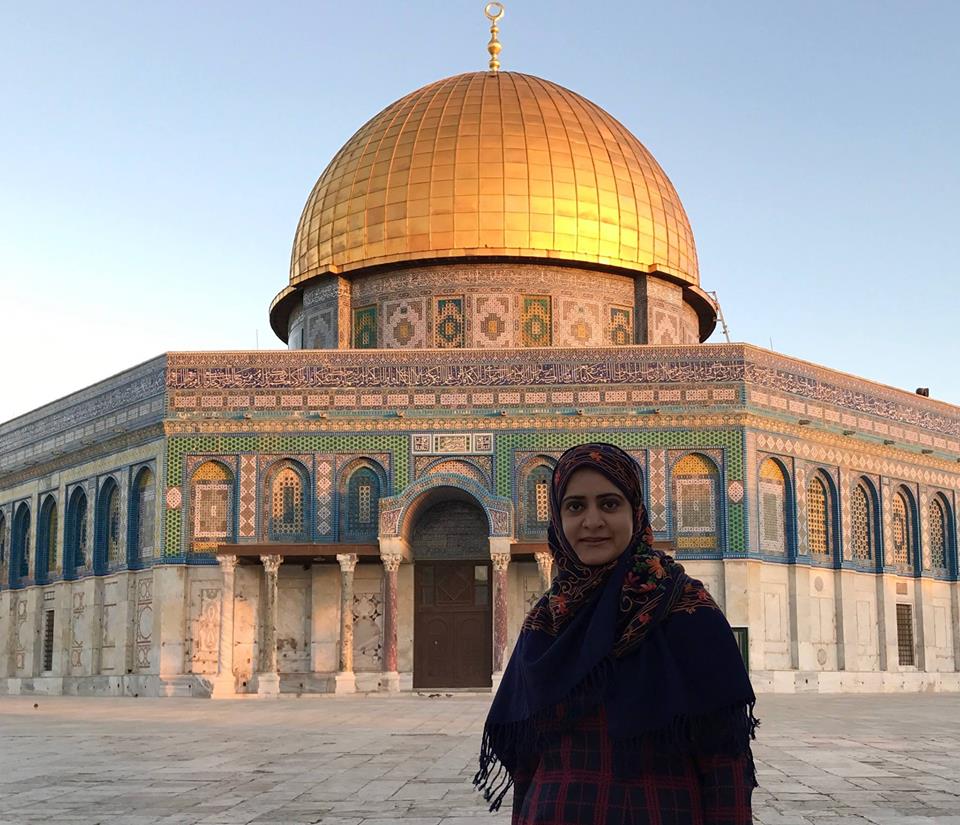 Madeeha works at Voice of America as their Web Editor and Multimedia Journalist. Aside from her working aspirations, she had a dream of fulfilling her father’s dream to travel to the ‘Forbidden Land’.

“I had a dream of visiting ‘Jerusalem’ for as long as I can remember. I had inherited this love for #QiblaeAwwal and #Jerusalem from my parents specially my dad, who was a world traveler and had a strong wish to visit Jerusalem but couldn’t because he was a Pakistani passport holder.
When I came to US, I pledged to myself to visit this revered city as soon as I receive my blue passport. In December 2016, a few months after becoming US Citizen, I visited Israel and prayed at Masjid e Aqsa, Dome of the Rock (Qubbatussakhra), roamed freely in the old streets of Jerusalem, felt the auspicious history in the oldest cities known to human civilization; Bethlehem, Hebron (AlKhalil), DeadSea and Jericho (Ariha) and got a chance to interact with the locals be it Muslims, Christians or Jews; and found out everyone had their own stories yet very sacred, unique and holy connection to this land.

It was an amazing experience to be at a place which is so unfamiliar to us and where not many Pakistanis’ were able to set foot before.
I’ve arranged a pictorial glimpse from my long-awaited journey to Israel with description of different Holy places and cities.

Inside view of Al-Aqsa Mosque 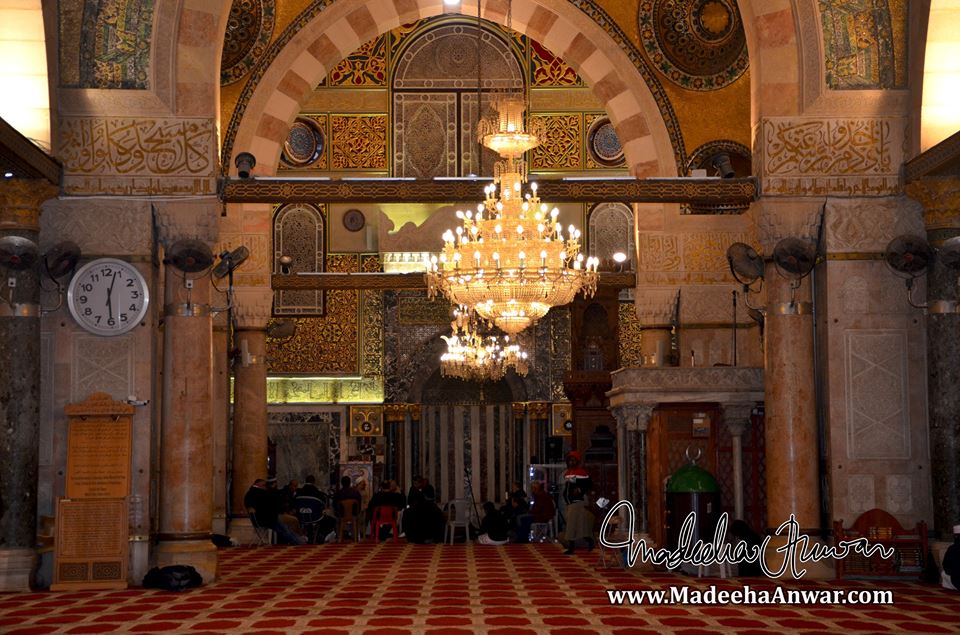 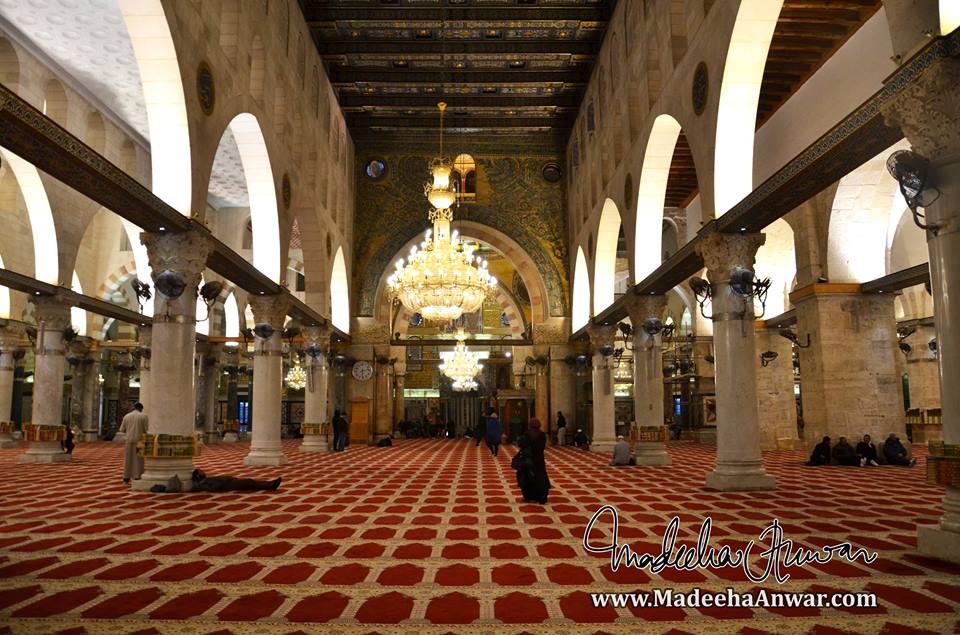 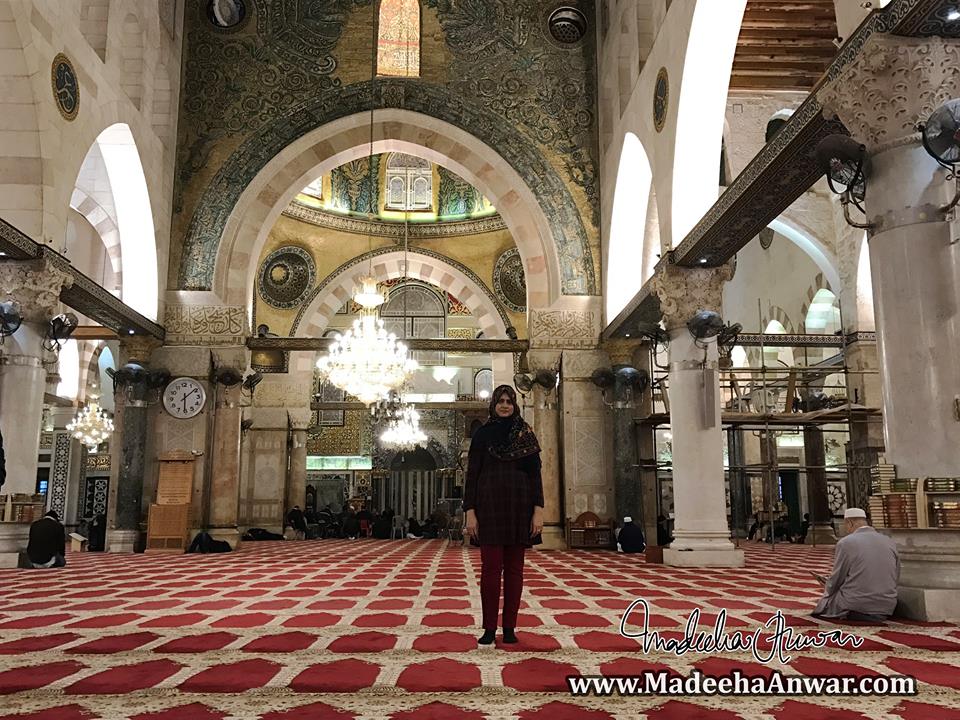 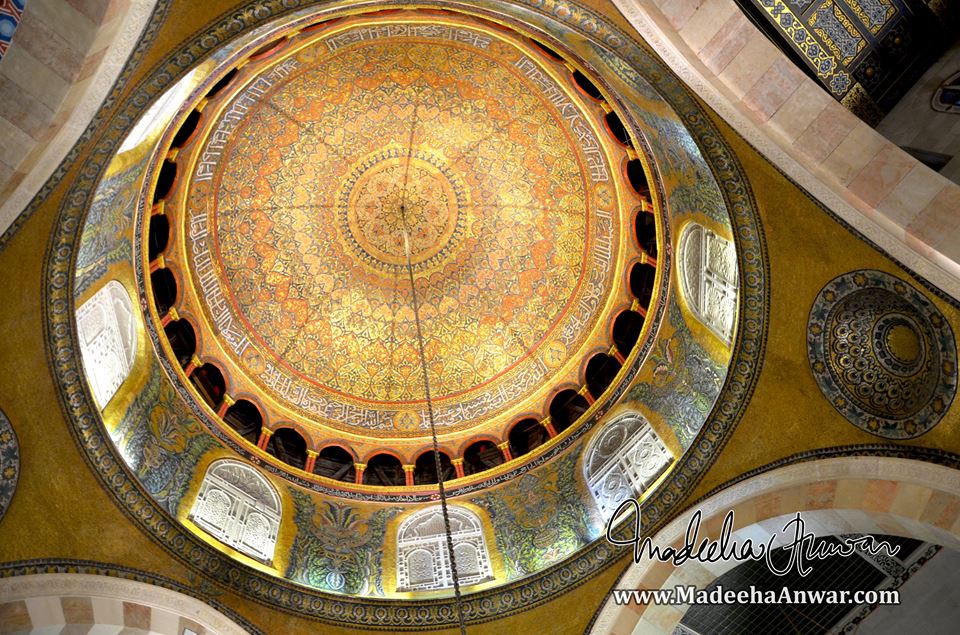 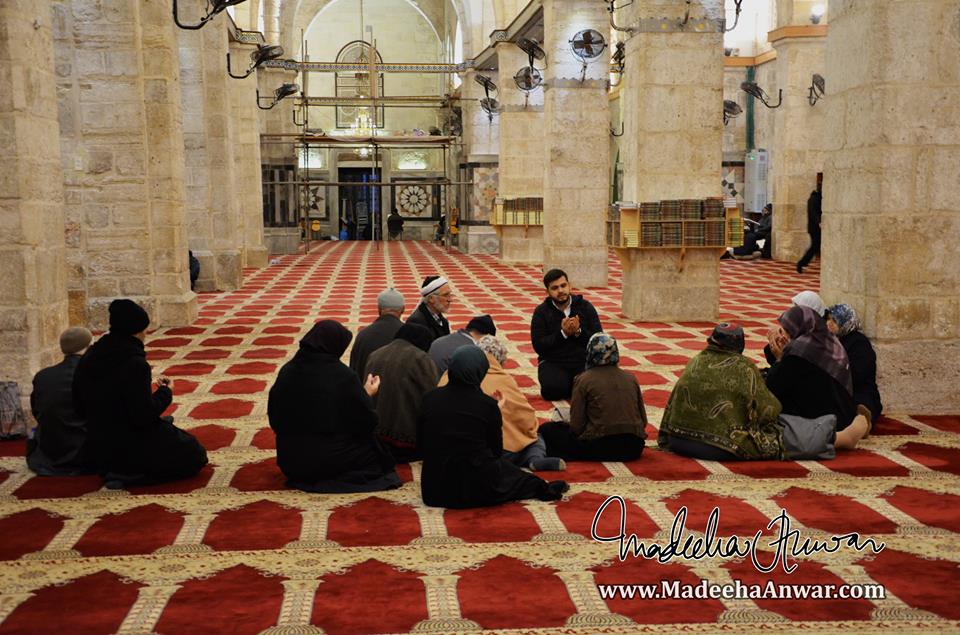 Outside View of Al-Aqsa 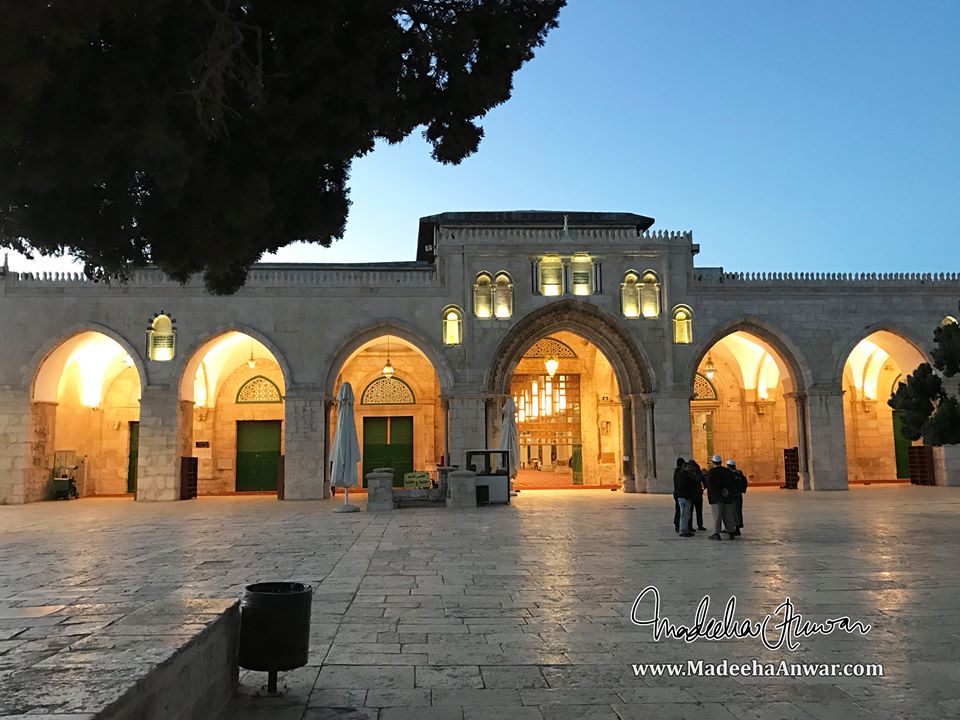 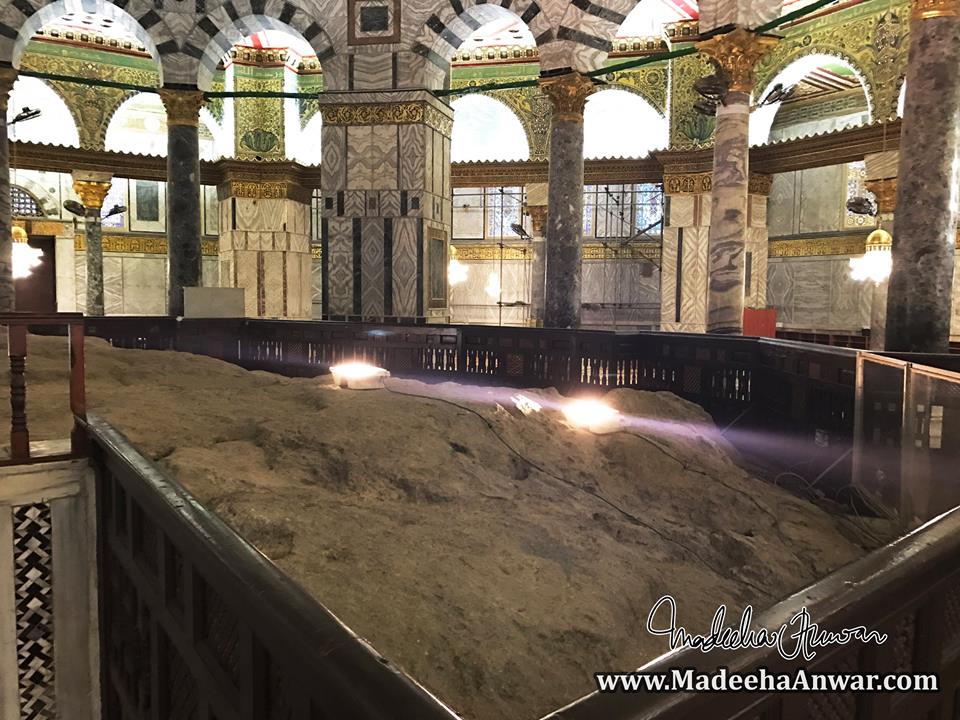 A Woman Selling Vegetables at a Palestinian Refugee Camp On Way to Bethlehem, Palestine 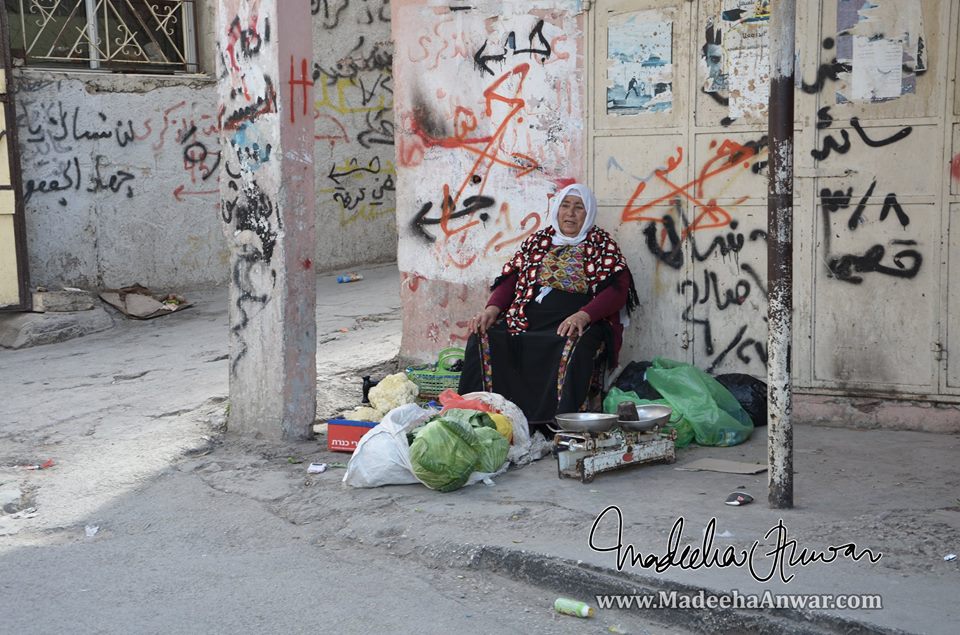 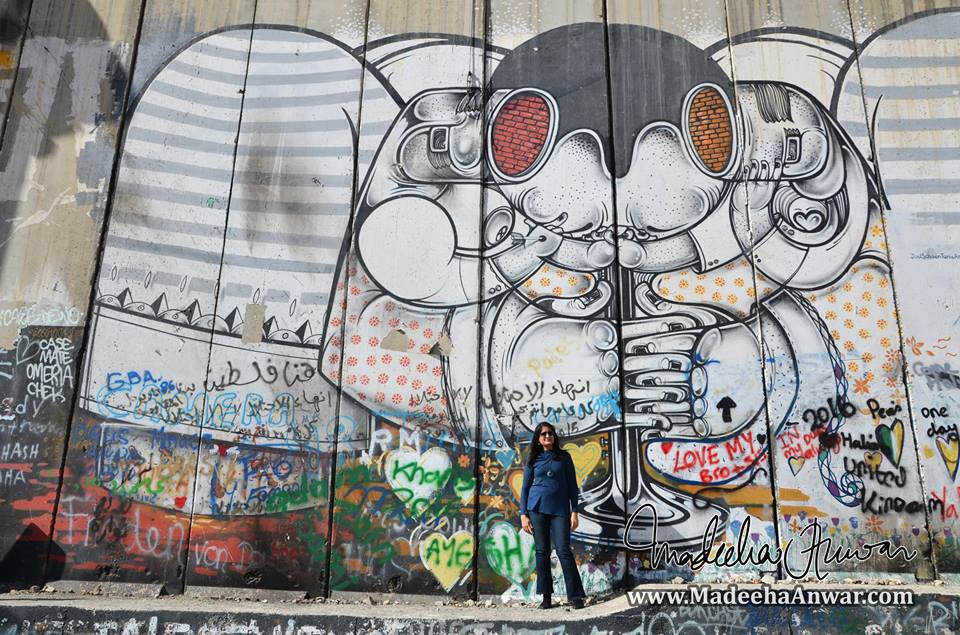 Regardless of how countries are seen through the eyes of politics, one thing is certain, the Islamic heritage embedded in this Forbidden Land is a must see for every Muslim traveling fanatic.