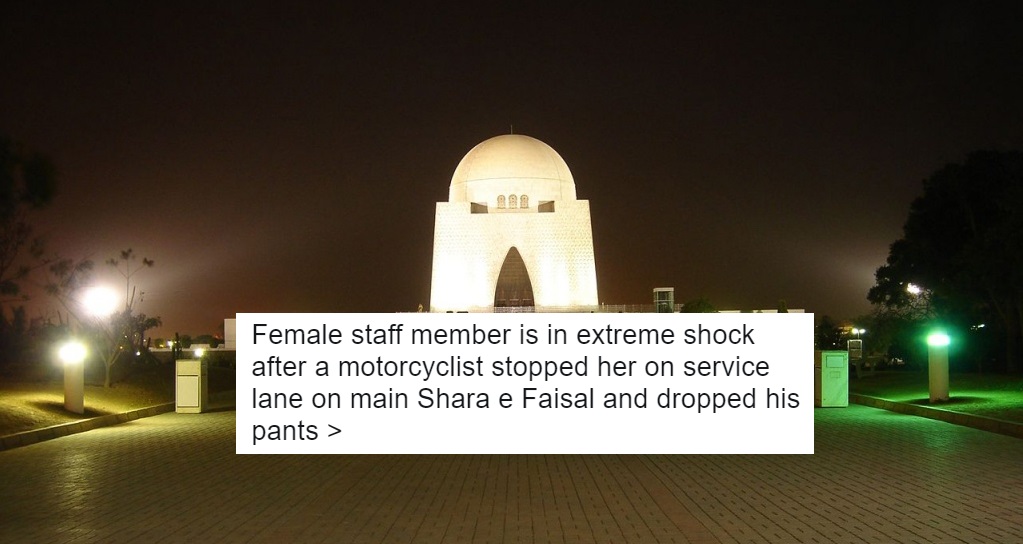 Public harassment has gone way too far and we continually come across shambolic incidents that make our hearts tremble for our society. Sexual harassment in public remains a very common social dilemma that every society in the world has succumbed to. While we continue to battle this nemesis, raising our voices and being vigilant against it must remain.

The bitter seed of harassment continues to grow and our society has unfortunately been a breeding ground for sexual predators, perverts and alike. Nearly every woman in our society has been harassed once in a lifetime. While women continue to show strength against harassment and there are social campaigns addressing these taboos yet certain voids in our society prevail. We must address the root causes and what drives a person towards adopting such a behavior otherwise our society will remain tainted by incidents as such what happened with a woman in Karachi.

This girl on Twitter reported what happened the other day at Karachi’s busiest road, Shahra-e-Faisal. She reports the incident unfolded while the female staff worker was walking the service lane and the man appeared.

The guy stood in front of her & started to touch himself for a while until she overcame the initial shock & started shouting.

Harassed like this in broad daylight while commuting to work. Pervert came on when it was not crowded. Must have done this to several women.

She was shaken beyond words & kudos to her for getting over the initial shock & shouting which made the pervert run away.

Exactly! Not acceptable and should be punishable regardless of Ramzan.

She was in extreme shock. Is a brave girl, created noise hence the pervert ran away. She will re live this while coming to work every day.

And people bringing Ramzan in it just make no sense at all. THIS SHIT SHOULD NEVER HAPPEN !!!

Unbelievable.. I mean hows that possible. Sharaefaisal is bz all the time.. people would have kicked his **s ..

Hopefully she made a complaint. The usual worst part is that scum got off easily because its too much of a chore to call the cops on him

What is more shocking…

Prostitutes/call girls also get semi-naked in public to seduce Men… we don't take it serious.. business as usual..??

I narrated what happened with the girl, didn't generalise a gender coz of an ass hole.

See guys, this is why we need sex education. Sexual predators and perverts of such kind need to be taught a good lesson. It’s maddening how people think they can get away with this. Surely, if the pervert had the audacity to attempt such a harassment out in public, in fact, on the busiest road of Karachi then we can only think the guy needs help and therapy. It’s not normal behavior, not even by standards of harassers or predators.

We hope the poor woman could recover from the trauma of the shocking incident.

The Friendship Between Pakistani Actor Noor Hassan And Indian Actress Sara Khan Is Something You Need To Read About!
An Unexpected Meeting of this Guy With Sarfraz Ahmed Revealed His True Personality
To Top