Karachi Groom Beaten By In-Laws For Trying To Marry Secretly!

The concept of polygamy is permissible in Islam. However, this law is rather misinterpreted. Recently, the first wife of Muhammad Asif Rafique Siddiqui exposed her husband who tried to carry out his third marriage, secretly.

The Federal University student advisor, Asif, was beaten all ends by his in-laws, as his wife made his attempt on marrying the third time futile. 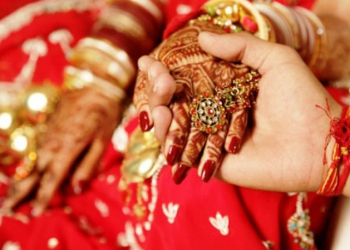 According to the media report, the valima function was ongoing, when the first wife of Asif, Madiha Asif stormed the hall with her family members. Moreover, she declared that this marriage cannot happen. In Islam, a husband cannot remarry until he has permission from his first wife.

Furthermore, Madiha proclaimed her husband as a fraud, who has been loitering around ever since. Asif used to call himself unmarried, every time he proposed for marriage. Firstly, he had declared his love for Madiha, and two years later, he went on marrying one Zehra Ashraf. Last but not least, after a gap of 4 years, Asif went on marrying for the third time. This time the girl was Dania.

Apart from that, the wife claimed that her husband married secretly, with his family supporting him. Therefore, she professed her incapability to live happily with her husband and her in-laws.

Nevertheless, Asif also imparted light on his side of the story. He says that he has filed for an FIR against his in-laws as they had beaten him. Furthermore, he labeled his actions as justified and legal.

The Concept Of Polygamy Mistreated?

However, despite all the fuss, the practice of polygamy is more likely to be wrongly abused, unlike the idea that our Prophet PBUH gave. In this case, the husband might have been going on this ‘getting married‘ rampage to obtain dowry.

There have been many cases, where the husband failed to meet financial needs. Due to the lack of employment and lack of education, the only way people see in order to avoid all of this is to exercise certain rights wrongfully. Such as in this case.

Moreover, we can say that the materialistic approach to life, or more likely the lust of wealth has greatly ameliorated the practice of dowry. As a consequence of which, the practice of multiple marriages conducted in secrecy has increased substantially.

However, polygamy can also lead to a wider range of sociological problems. The consequence of which is emotional issues ranging from depression to anger, hysteria and even illnesses of other sorts.

Last but not least, “betrayal of any kind is hard, but betrayal by one’s religion is excruciating. It makes you want to rage and weep.“- Sue Monk Kidd.