Domestic violence has been the foremost threat to women worldwide, even before the COVID-19 outbreak. However, the emergence of the pandemic has escalated the gender-based violence, particularly domestic violence.

Amidst COVID-19, the stay-at-home order has proven to be extremely dangerous for females. The pandemic being life-threatening itself has trapped the domestic violence victims with their abusers.

Every one in four women has experienced some form of violence in Pakistan. Be it emotional, physical, or sexual abuse, about 8 million women have faced violence in the country.

A survivor of domestic abuse, identified as Tania, has called out her husband for endangering her life. A video has surfaced on the Internet, where the woman begs for support. As per the woman, her husband attempted to strangle her. She talks about she ran away to her mother’s place to save her life.

Survivor of domestic abuse begs for support after a horrific attempt of strangulation by her husband. She submitted application for FIR but no action taken. She refers to #sadafzahra & how society failed her @RwpPolice @DrTajikSohail
Pls ensure swift action,her life is in danger pic.twitter.com/tOH2AXUCel

Sadly, upon submitting an application for the First Information Report (FIR), the police showed no interest. In the video, the survivor of domestic abuse also appeals to get justice. Moreover, she asks the authorities to punish the abuser aka her husband for the horrific attempt of strangulation.

In addition to this, the woman in the veil also brings up the case of Sadaf Zahra. When asking for justice, she talks about the recent incident of domestic violence where a husband allegedly murdered his wife.

She talks about how the system always fails to take instant action. According to her, the police took no action prior to her submitting the FIR application. She raises many questions regarding the system which fails to provide justice to the victims.

Let’s not forget that this is not the first case of domestic violence to be reported since the COVID-19 lockdown. A number of cases were reported last month. One of these cases included a man who killed his own children after having a fight with his wife. Before that, an eight-year-old maid was beaten to death by her employer for a minor mistake.

Who is to blame?

Well, it does not take one long to decipher the root cause of the persisting domestic violence against women. Especially, for a country like Pakistan, without a shadow of a doubt, we can point our finger at society’s patriarchal attitude. 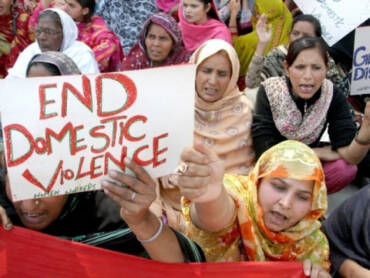 In a male-dominant patriarchal culture, domestic violence against women is considered a ‘private family matter’.

No one is to talk about it openly to anyone- your mouth is zipped. Regardless of being an Islamic state, religious and social norms are abused on a daily basis. Women face violence and discrimination, and a new case of domestic violence is reported every other day.

Rawalpindi Police will ensure stern action, as we’ve always exhibited ‘zero tolerance’ on the cases of abuse against women and children. Please send us a direct message with further details, and name of the Police Station where the application is submitted. Merit will be ensured.

Furthermore, the woman in the video begs for justice and punishment for her husband. Fortunately, the Rawalpindi Police have taken notice of the matter and replied to the aforementioned tweet.

We truly hope that the latter gets justice and the accused faces the consequences of his actions.

Unemployment Forces Man To Rob Landlord In Gujranwala – Police Later Pay Poor Guy’s Rent
From Rags To Riches! Here’s How Some Of Our Favorite Pakistani Celebs Kick-Started Their Careers
To Top