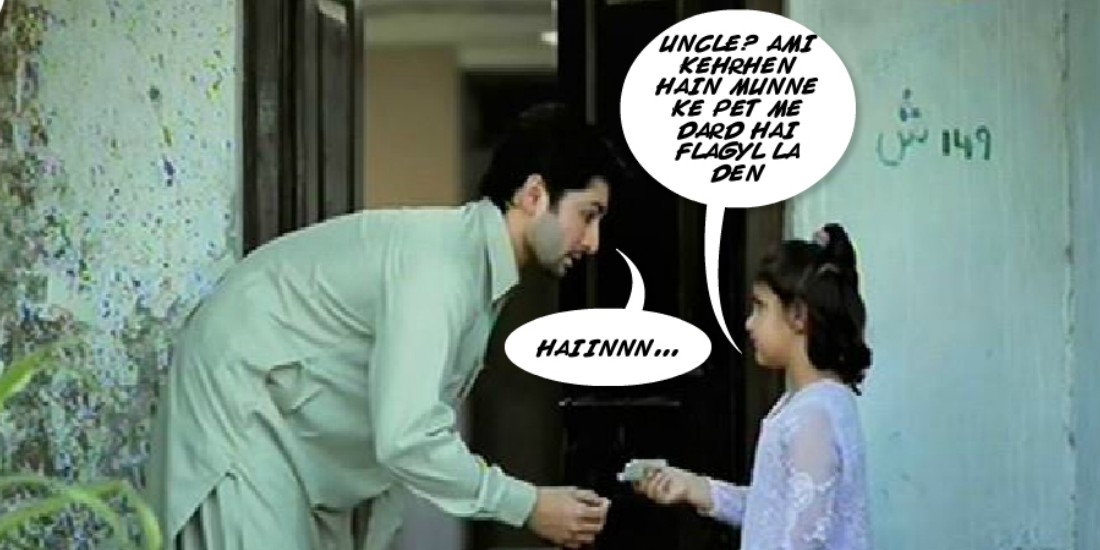 If you come across a group of females wearing the white coat at Centaurus Mall, or a car passing in front of you is displaying a sticker showing red stethoscope, do not emulate. They are not the only doctors around. Everyone else in the mall without a white coat is also a doctor and every car without the specific sticker is also a doctor’s car. And YOU are also a doctor. Screw MBBS is the bottom line. Everyone in Pakistan is a doctor, a self-proclaimed one.

Let’s see how every non-MBBS doctor in Pakistan treats some of the commonest conditions:

Scientifically, an episode of loose stool may be either because of an irritant/foreign particle in the food which our gut has tried to remove from our system as a reflex mechanism, in which case the episode turns out to be a blessing in disguise and the job has been done. But NO! Dawai ke baghair sakoon kidhar aata hai hamain? Let’s take Flagyl (Metronidazole), an antibiotic – and kill the normal residing harmless bacteria in intestines and evolve them into powerful harmful bugs by a process of antibiotic resistance. Kudos self-proclaimed Daactaron!

Read Also: Watch Out For The Self-Medication Of Antibiotics! It Might Be A Threat To Your Health

Panadol is a drug of choice and rightly so. But Aadhi goli khana kyun kai dawai garam hoti hai. The therapeutic dose is 1000 milligram or two tablets. One tablet of Panadol is 500 mg. Half of it reduces the dose to 225 milligrams. So instead of 1000 mg to treat your pain, the doctor inside you recommends a 225 mg and expect to have the same result. It’s like someone wants to make babies without losing their virginity.

It will only prevent you from developing a heart attack or stroke if you are already a cardiovascular patient. It will not lower your blood pressure. Disprin (Aspirin) is a blood thinner, NOT an anti-hypertensive. Kisi Wadday dactar se mashwara kar lain. Shukriya.

Diabetes Se Bachna Hai To No More Sweets My Child!

‘Meethay chaawal nahi khaunga, Namkeen kha loonga’ – (Dil ke behlaanay ko Ghalib ye khayaal acha hai). As much prevalent Diabetes is in our country, we are still not fully aware of its dietary control. The most common misconception we have is that cutting down sweet things alone is going to control our “sugar” or Glucose level. It’s not about the sweet or sugary content which leads to a problem, it’s the carbohydrates – the metabolic end product of which is glucose. Sweet rice is not the culprit, RICE is the culprit because of its high glycemic index.

The carbohydrate content in rice ends up as glucose after being metabolized in the body, causing blood sugar to rise up. Same is the case with other carbohydrate-rich foods which apparently are not sweet for example potato and bread. Take as many Glucophage tablets as you like, and inject as much insulin as you want, if you don’t control your dietary habits (including zero sugar Coke), be prepared for your body to be eaten away by diabetes – not a pretty sight at all.

The most frequent prescription is Augmentin. O Bhai it is Viral – VIRAL. Treating Virus with an antibacterial is as useless as a one-legged man in an ass-kicking contest. Use herbal remedies, Qarshi ka Johar Joshanda, Gargles, and simple pain killers like paracetamol. Wait for 5 to 7 days, be patient. It is a self-limiting condition, it will go away on its own. Absolutely no intervention with fancy antibiotics is required. Apne andar ke deadly doctor ko unleash na karain!

We understand all of us are self-proclaimed doctors and we trust ourselves more than someone who has spent half of his life studying medicine, but in the end, it’s about our own health and safety. Kindly consult specialists even if it’s a minor health issue instead of self-prescribing medications. Lekin Nahi, Ham khud doctor hain we will deal ourselves, right?

Punjab Nahi Jaungi – A Mesmerizing Cultural Tale
Watch out for the Self-Medication of Antibiotics! It Might be a Threat to your Health
To Top