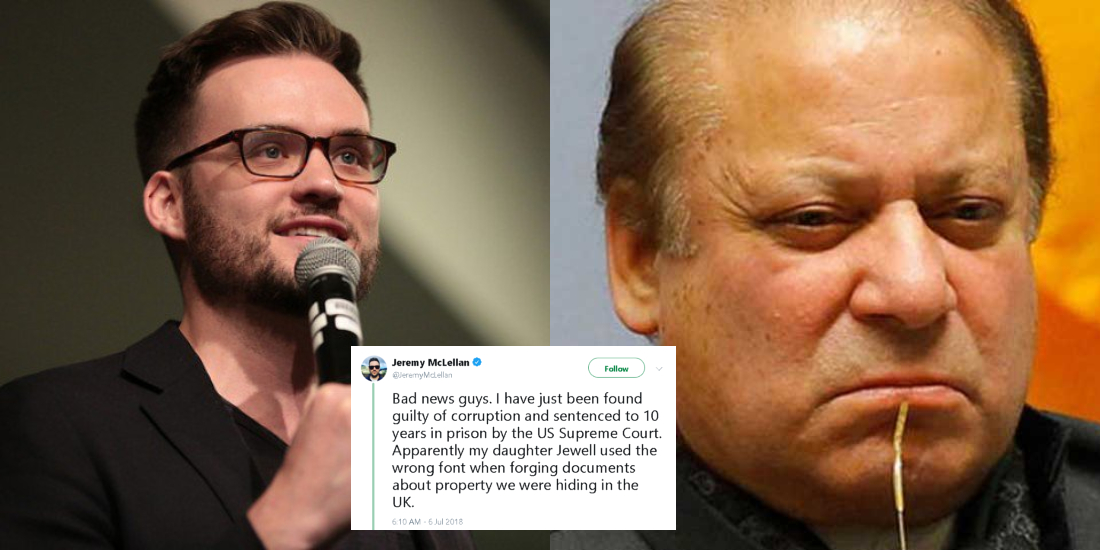 It is a shock for the whole nation when the news of how our ex-pm Nawaz Sharif was sentenced 10 years pf imprisonment, while his daughter, Maryam Nawaz was sentenced 7 years of imprisonment and her husband, for 1 year. Not just that but all three of them are given heavy penalties of £8 million and £2 million fine respectively. The Avenfeild Reference case now came to a verdict which almost shocked everyone.

The internet is having a good time with this case and people can’t stop joking about it. They took it as a chance to have a good laugh.

So, this little kid has some equal grudges as Imran Khan

My mother took my younger brothers Eidi last year, told him Nawaz Sharif stole it. Now he has a personal grudge with him. ???

Our celebrities took over Twitter and voiced their opinion on the case!

Mubarak Pakistan !! ?? We are only heading towards better if we are accounting the corrupt and punishing them ! #NayaPakistan #PakistanZindabad

And how can Hamza Ali Abbasi miss this chance of tweeting about NS?

Look at his ecstasy! He even mentions about the case at the premiere of his movie

And the memes! Oh, dammit!!

Oh! He just got saved

A post shared by Just Pakistani Things (@justpakistanithingz) on Jul 6, 2018 at 7:01am PDT

When you see it.

A post shared by Just Pakistani Things (@justpakistanithingz) on Jul 6, 2018 at 7:00am PDT

So, MR. JEREMY! Can he miss a chance to troll Nawaz Sharif? He just can’t. He can’t resist the urge!

Bad news guys. I have just been found guilty of corruption and sentenced to 10 years in prison by the US Supreme Court. Apparently my daughter Jewell used the wrong font when forging documents about property we were hiding in the UK.

This is a ploy! We knew it

This is simply a plot by Donald Trump, the US Army, and probably aliens to prevent me from competing in the 2020 elections. Jewell and I will be hiding out in Pakistan until further notice. Thank you for your time.

So, sorry! Jeremy nobody would believe you

Nobody will believe you. First you must spend 30 years to befool atleast one whole generation, keep another generation out of schools and demoralize them till they say “khata hai to lagata bi to hai”

Still can’t get over the fact that Nawaz Sharif is the first person to go to jail for using the wrong font.

Now, that they are being jailed after the hefty fine, people are worried if they would really spend their sweet time in jail or would very easily get bailed. That’s the thing about these cases, they only let people get defamed but can’t force them to get their punishment.