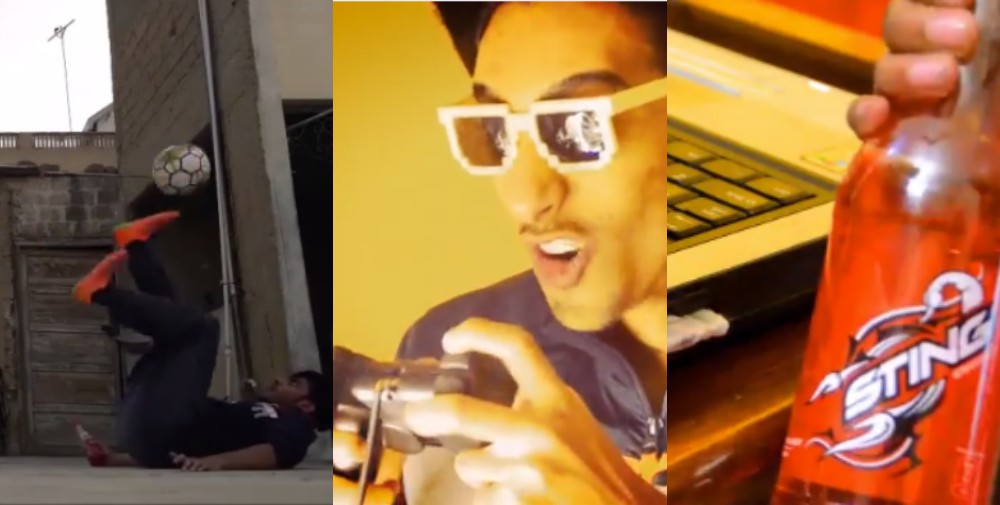 Everyone knows how far social media has gone in terms of viral content. Simply scroll your newsfeed and you’ll come across a number of crazy things, one of which has to be the insane challenges taken on by people. Now, another challenge has swept away Pakistanis on a high note and we have a lot to talk about.

Just recently, we stumbled on certain videos of people where basically, they were showing what happened to them before and consuming an energy drink as a part of a challenge. Typical social media stuff, eh? You would possibly expect them to probably record them going outrageously crazy. But on a very interesting note, THAT IS NOT THE STORY OF THIS CHALLENGE!

So, here’s what exactly happened…

The energy drink in question here was Sting, and rules were easy-peasy: they had to record before and after videos of drinking Sting and how it made a difference in their energy and moods.

The competition saw a large number of entries and we have compiled the best of the best.

Normally we see world class footballers pulling off such spectacular freestyling skills. But he went insane after having that Stink, seriously.

Sting awakes the Messi in Abdullah Riaz! What does Sting do to you? Film it and send us your entry! You'll get a chance to win a brand new Samsung S8 & VR Gear! #LifeKaSwitchOn

How much of a difference could it make while working out? Well, here you go..

With Sting, Wajahat Ali does his workout like a pro! Have you submitted your entry? Do it now and get a chance to win a brand new Samsung S8 & VR Gear!#LifeKaSwitchOn

Haris Bilal levels up his video game with Sting! How does Sting get your adrenaline pumping? Send us your entry today and get a chance to win a brand new Samsung S8 & VR Gear!#LifeKaSwitchOn

How about when you play guitar?

Saad Aqeel plays his guitar with Sting on a whole new level! Can you play an awesome tune like a pro Stinger? #LifeKaSwitchOn

These were the major entries where we precisely saw the difference. And as of course, no challenge goes without an exciting prize. With that being said, the most creative entry will be winning grand prizes.

What’s there to win?

But here’s the best part!

So much for the winners; what about the runners-up? Obviously, there could only be, one winner but there were some really good entries and the competition was surging, which is why the runners-up are getting some exciting stuff too.

Now it’s all down to one question: who is going to win it?

Read Also: 5 Ultimate Ways To Combat Fatigue And Get Your Energy Back