Last night’s match between Lahore Qalandars and Islamabad United was quite an electrifying one!

It was a remarkable showdown between one of the best teams of Pakistan Super League season 2 – Lahore Qalandars and Islamabad United. Big names like Misbah-ul-Haq, Grant Elliot, Shane Watson, Sam Billings, Umar Akmal, Brad Haddin and etc., went go face-to-face above the support of their fans and followers hailing chants for them. 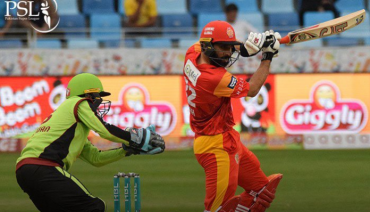 Safe to say, LQvIU was one of the most highly anticipated matches this tournament has had.

Lahore Qalandars did come out victorious but we still have so much to talk about.

PSL is absolutely a platform for youngsters to outshine and portray their talent and skills. Shadab Khan from Islamabad United absolutely understood this and took all the chance he had to make his name count.

Islamabad Untied did put up a resounding score and it was due to 18-year-old Shadab’s impeccable innings during their batting.

Im telling ya’ll this little fella Shadab Khan has some real character about him in every department. 18 years old. #PSL

We have a new magician in Pakistan and it’s Shadab.

Not even Misbah could save them, let alone Shane Watson or Brad Haddin. The top batting order who were highly expected to perform but rapidly saw the pavilion as they languished against the bowling of Lahore Qalandars.

It’s like Islmabad United vs Lahore+3 blind shitbags. Including third umpire…Phr bhe inshallah we are going to win it. #LQvIU #Psl.

My brother is better umpire than the ones umpiring @OfficialPSL #LQvIU

#LQvIU Terrible umpiring. This Hassan Raza guy is such a poor umpire.

Well, last night Umar Akmal was a nightmare for Islamabad United. He scored 66 off 42 balls, with 3 sixes and 8 fours.

The best of moment of all – Grant Elliot, take a bow!.

Well, what a great way to finish the match, Elliot! A huge round of applause for the sportsman. If it wasn’t for him and his courage, Lahore might as well not have won it!

Is This New Social Media Sensation You’re All Going Gaga About Really A ‘Burger Wala’?
This Girl Destroys The Pakistani Concept Of ‘Gharelu Bahus’ and How Women Are Treated
To Top