We Are Worrying For The Future Of The Viral 'Peeche Dehko' Kid Ahmed Shah|Parhlo.com

Pakistani’s love memes and especially the ones that involve kids! Throughout this year, a lot of memes are on the rise and we just can’t get enough. And this involves the viral kid Ahmed Shah as well. 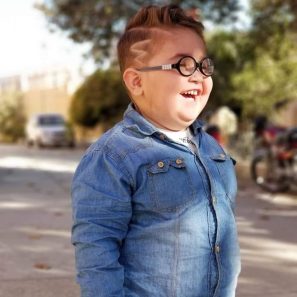 Ahmed Shah gained fame because of his viral videos where he seems to talk with a funny accent and in an informal tone.

Well, these are some reasons why fame might actually not be ‘too’ helpful:

Sadly He Couldn’t Become Famous For A Good Cause:

The video that people went crazy over, as much as this provided us with smiles…there’s a dark side to it.

We just want our memes and call it a day but do we really look into the actual people behind these memes and their influence? Ahmed Shah became famous for misbehaving with a teacher – a behavior that is rude and discouraged by society as well as most parents.

But people laughed at him for that.

What exactly are we teaching our children through that? That it is okay to misbehave?

The people giving him this hype are actually normalizing this behavior and no one of us has tried to evaluate the big picture.

In the second video where the infamous ‘Peeche dehko’ or ‘Peeche toh dehko’ and ‘tu mera dushman hai’ took place, the kid once again in the video is talking as informally as possible with his elders. Now the question arises:

You as a parent would not encourage this but how can this be ‘cute’ or ‘quirky’?

Some have used social media to call out people who worry for the child as if we’re jealous. But then again, everyone has their own approach to it.

Because there have been tweets where people have bashed Ahmed Shah (gasp) for being all over the timeline. However, giving the advice to take better care of the image and future of the child isn’t jealously…it’s just a concern.

He deserves to be famous and successful but not for the wrong cause.

The Child Is Over-Worked:

Do you guys love TV shows? Well, we all do because they are a major source of entertainment for most Pakistani’s.

At first, Ahmed Shah participated in a few shows where he appeared as a guest.

But suddenly he does a guest appearance at shows…regularly! A child that isn’t even ten is working a full-time job!? In almost every country (that follows the laws, no offense) has a minimum requirement of how much a child should work. Not to mention, children as young as him shouldn’t even be working this much.

Its plain child labor and as a nation that’s embarrassing. Yes, he is in the spotlight so he will need to make appearances but working this many hours where the child also gets visibly angry sometimes, is careless.

The thing is it’s an amazing thing that his parents can earn a decent income and earn a better livelihood through his fame. But is overworking a little kid okay? Just for some cash? Children shouldn’t be used to work for their parents. And in some shows he actually seems annoyed but yet he is expected to put on a ‘funny presentation’ for the people.

Just to satisfy the audience.

That is really burdensome.

His Life Is Out For The Whole World To See:

Honestly, we Pakistani’s leave no one out. We can make fun of literally anyone and everyone which is pretty ironic because our religion advises otherwise.

We don’t realize the gravity of such comments and how badly they can affect the people that they are directed at. He isn’t just a Pathan ka bacha that we can always use for our memes.

It is also pretty depressing to see young women kissing the child and posting it on social media showing as if he’s a ‘little playboy’.

This person puts the case to rest. People comparing a child to Imran Hashmi… everything has gone wrong:

Here are a bunch of memes that people have posted throughout twitter, thinking they’re funny when in reality they’re super harmful:

So hilarious! Making fun of a kid just because we can!

Yet again an unhealthy meme made for a few chuckles:

Mostly, the timeline is full of people calling the child ‘cute’, ‘sweet’, ‘MashAllah itna pyara’ but how long can it take for people to hate as well?

Fame comes with a price and sadly enough we cannot protect young famous children from that. Are we fearful of Ahmed Shah’s future? Yes.

When he’ll look back at the very first video of his, maybe he’ll dislike the reason he became famous for or maybe he’d appreciate it. We can’t know the future.

His Personality Can Change For The Worst:

One thing is for sure. There are a lot of effects on his personality because of this sudden popularity.

Recently, in the Good Morning show, he started to wail loudly and beat his brother for capturing his chair in musical chairs. Also people keep provoking the kid for fun:

Listen, every host tries to let the kid have his way and when he doesn’t? He lashes out which we observed in the Good Morning show. This is most definitely not the child’s fault nor are we making it his fault.

It’s the audience’s fault that clapped after he got angry and the hosts for encouraging him instead of seriously stopping.

Do remember we should NOT blame a young child for his actions because all of it is influenced by his surroundings. This is why it is important for these shows to stop appreciating his negative energy and let the kid ‘breath’.

Instead of always expecting him to be in his ‘meme mode’, let him function as he is. He is popular and loved by many anyways.

Regardless, we really adore Ahmed Shah’s existence. He is a cute chubby child that majority of us can risk our lives for! This is why it is hard to see him suffer from the spotlight and fame.

We only wish the best for him. Hopefully, he doesn’t overwork himself and his negative behavior is always met with a scolding.

Comment below what you think of this child’s fame and did it ever occur to you that it might not work for his favor? We’re curious about your approach as well!

A UK-Based YouTube Couple Has Been Exposed For Fooling People In The Name Of Islam And Tauba Hai!
Sudanese Military Is Turning The Revolution To A Deadly Massacre And People Around The World Are Standing In Solidarity!
To Top