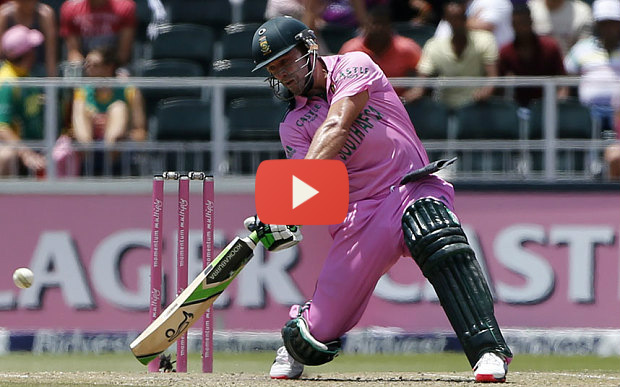 AB de Villiers smashed the fastest century in ODI history – from just 31 balls – to propel South Africa to 2-439 from their 50 overs in the second One-Day International in Johannesburg.

Opening pair Hashim Amla (153 not out) and Rilee Rossouw (128) also made centuries, the first time three players have reached three figures in the same ODI innings.

But it was all about De Villiers, who didn’t arrive at the crease until the 39th over but went on to make an astonishing 149 from 44 deliveries, equalling the world record mark of 16 sixes in an ODI innings in the process.

De Villiers and Amla put on 192 for the second wicket, from just 68 balls, as South Africa eclipsed their highest-ever ODI total by a single run. The innings immediately sent shock-waves around the cricket world, particularly with the ICC Cricket World Cup less than a month away. “It’s funny you say that, the boys are actually talking about it downstairs,” Mitchell Starc said after Australia’s ODI win against India. “Yes, we are aware of it. He’s a fantastic player as we all know. “I’ve played a little bit with him and been fortunate enough to see him at full flight. “He’s not in our side of the draw for the World Cup, so not someone we have to worry about too much at the moment.”

Humaima Malick To Be Seen on Indian Television Soon
How a Teenager, Paulina Raguimov, Turned Her High School Internship into a Game Design Career
To Top