Finally, 'Wasu' Gets Relief From Govt of Balochistan And Thanks Shehzad Roy For Help

A couple of days ago, a viral picture of Wasif aka Wasu did the rounds on social media. Wasif (Wasu) is a renowned artist from Balochistan who was introduced to the main stage by Shehzad Roy. Roy and Wasu did two songs together, while also starting a show on Geo called ‘Wasu aur Main’.

However, in the last decade or so, Pakistan lost track of Wasu and his talents. It was only recently that his condition surfaced, where he required medical and financial help. It was being said that Wasu was not doing well and needed immediate help. Parhlo reported the incident before any other publishing house, gaining traction for Wasu and his cause. 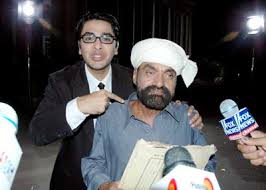 Since then, Wasu has come out with a video, thanking Shehzad Roy and the Govt of Balochistan for their help. On orders of CM Balochistan Jam Kamal, spokesperson Liaquat Shahwani visited Wasu in his village and showed support. The Govt of Balochistan vowed to incur all of Wasu’s medical expenses while also giving him support through other means.

Wasu, in his new video, thanked the Government of Balochistan for looking out for him. He said that he had gone through some tough times, but Shehzad Roy stood by him throughout. When Wasu fell ill, Shehzad Roy took him to the Agha Khan Hospital in Karachi and incurred all expenses of his treatment. Moreover, Roy also remains in contact with Wasu to give him mental support among other things.

Later on, Liaquat Shahwani also visited Wasu and gave him CM Balochistan’s message of support. From giving him a house to means of livelihood, the Govt of Balochistan has promised to take care of Wasu.

In another video, Wasu was seen singing his famous cover of Beya Beya Mai Dilbar by Mureed Buledi, as Mr. Shahwani sat next to him. In today’s day and age, the power of social media is immense. Through social support, Wasu’s case was highlighted and he received help in time.

In addition, Shehzad Roy deserves all praise for keeping a constant check on Wasu. Roy has been a constant source of support for the poor man from Jaffarabad, Balochistan. Wasu also played an important role in Shehzad Roy’s social activities and his ‘vision’ for change, for a better Pakistan.

Here’s to hoping that Pakistan sees Wasu and Shehzad Roy in another brilliant song/video, with a strong message.

What! The Simpsons Also Predicted The Beirut Blast In An Old Episode?
Oh, No Emirates! Famous Airline Leaves A Pakistani Stranded In Brazil Without Luggage
To Top