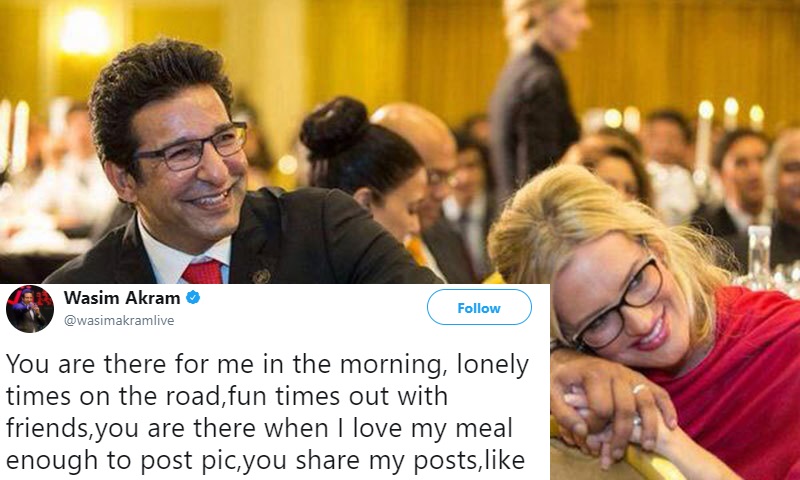 You know how people say, “We want a relationship where we can joke with each other and just be friends.”? Well, this is what we are going to talk about today.

Shaniera Akram and Wasim Akram indeed make an extremely adorable couple. When the two tied the knot, a lot of people claimed that their marriage wouldn’t work out because Shaniera belonged to a completely different culture and lifestyle. Our bhaabi, however, has proved the opposite.

Her continuous social work and dedication towards this country have shown how much she has settled in Pakistan and safe to say, she really loves the country as well.

Shaniera and Wasim Akram also made numerous public appearances and well, the two showed their compatibility to the world by appearing in local TVCs as well. While proving everyone wrong who said the marriage wouldn’t work, the beautiful couple continues slaying with their chemistry.

Wasim Akram reached the Twitter milestone of having 4 million followers of the social media website. In an extremely cute tweet, he thanked his fans for all the support they have given him and for being with him through thick and thin.

You are there for me in the morning, lonely times on the road,fun times out with friends,you are there when I love my meal enough to post pic,you share my posts,like pics of my family,give me advise and say goodnight just before bed! Thankyou to the 4 million of you legends??

@wasimakramlive well come my favorite and the best cricker of the world.

But let’s just say, Shaniera revealed that Akram is more romantic towards his fans than he is towards her…in an extremely witty manner.

@wasimakramlive This tweet is more romantic than the card you gave me for our anniversary! ?? https://t.co/FRTpxWAVId

And Well, People were Having a Laugh here As Well

Really when I start reading I was thinking it's for you but it's ended for us ??

Lol when she start reading she thought this tweet for her hahahahahah ?

This isn’t the first time the two showed how lovely their chemistry is and how fun their relationship seems.

It is ideally what all the marriages in the world should be – where the two can mess around and have fun.

Best wishes to Shaniera Akram and Wasim Akram. May God bless them with all the happiness in the world!