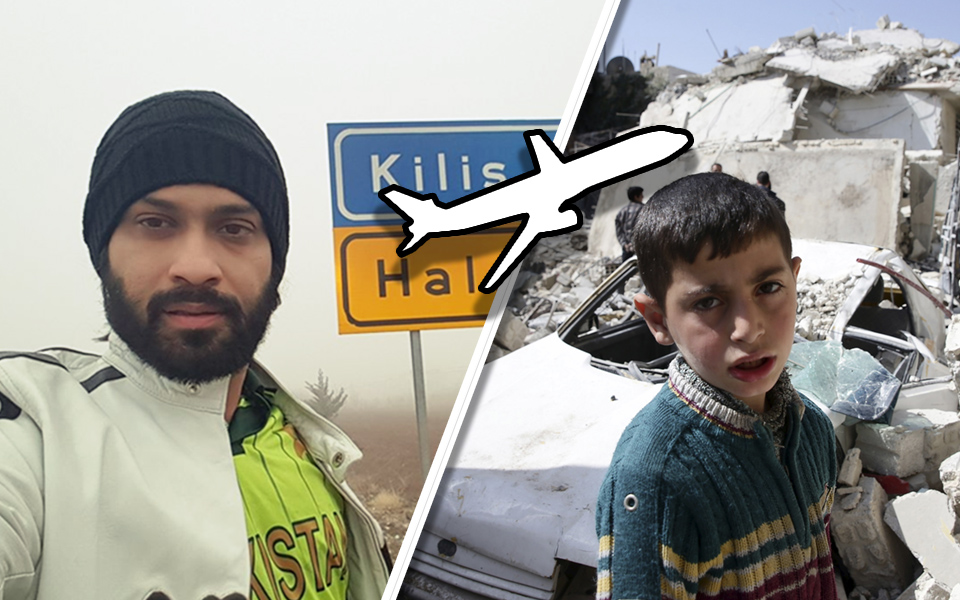 What is the most daring thing from a Pakistani celebrity you have heard about lately? Not a lot of times do we see our celebrities going around in remote areas of Pakistan to help those in need. Well here is one for a change. The guy who defined reality shows in Pakistan with his unique style and appeal is now hitting another landmark. Waqar Zaka, the man behind the famous reality show, ‘Living on the Edge’ has almost reached Aleppo. Yes, the destroyed city in the war-ravaged Syria.

Syria, the country in turmoil, due to a civil war, is facing a humanitarian crisis. A lot is happening in Syria that has put humanity to shame. Millions have become homeless. Hundreds of Thousands are dead and so many more have escaped their country to find a home elsewhere. Most of that is happening in the city of Aleppo. And among all this, we have the daredevil Waqar Zaka heading toward the war-ravaged city.

In a Facebook video posted from the town of Kilis near Aleppo, Waqar Zaka confirmed about his journey into Aleppo. Due to lack of availability of internet in the war hit city he said he would post whenever and however possible, from the area.


He also stated in his plans to let the People of Syria know that people of Pakistan care for them. For that he will continue to wear the Pakistani cricket team T-Shirt in the country, he said.

“Unicef has also not been able to reach some areas in the region and [I] plan to go there and bring one or two families from there to Kilis and get them a house… That way we can truly have a good new year.”

Waqar Zaka says he will record as much as possible during his journey in Syria. He also said he will try to post whatever he can from Aleppo, though there are issues of internet and electricity in the region. He also asked major media outlets to give coverage to his good deed as they make news from Masala stuff.

This comes after another one of his daring travel, the journey of Burma. A country that’s witnessing a state sponsored genocide of a whole ethnicity, the Rohingya Muslims. Waqar went there to bring out the story of the oppressed Muslims. He got a lot of praise for that. Again, his Syria travel is getting massive attention in Pakistani social media with many praising his decision. Even his critics are in awe as Pakistanis were seen tweeting with #WaqarInSyria hashtag. Here are the highlights.

Respect for the guy. ? #WaqarInSyria

A good human, a better Muslim, a helping hand and a proud Pakistani.#WaqarInSyria

And here is the answer to those who still can’t stop themselves from criticizing:

We wish a safe and successful journey to Waqar Zaka. You can donate and help him here.

What Kind Of New Years Resolutions Do Pakistanis Usually Make?
This 17-Year-Old Girl Explains Why She Never Told Anyone About Being Harassed
To Top