The former Indian cricketer Virender Sehwag took to Twitter to rudely lash out on Prime Minister Imran Khan. It isn’t the first that  Indian celebrities and media have talked negatively about PM Khan. However, Twitter users are having the time of their lives by roasting Sehwag for his insensitive comments.

PM Khan appeared on a US talk show called ‘Morning Joe’ where he was being interviewed by Joe Scarborough, who is an infamous TV anchor of the country. As the interview progressed, Khan seemed to mention the bumpy roads and substandard infrastructure of America. Then apparently the TV anchor, after this point, said, “You don’t sound like the Prime Minister of Pakistan right now, you sound like a voter from Bronx” 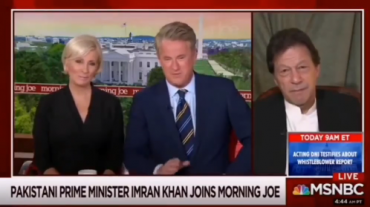 Virender Sehwag then posted a tweet picking on that point. He included a clip of the interview where this particular conversation happened and said, “You sound like a welder from the Bronx, says the anchor. After the pathetic speech in the UN a few days ago , this man seems to be inventing new ways to humiliate himself”

Despite the fact that this statement was entirely unnecessary, Sehwag also ended up making a mistake. The anchor clarified on Twitter that he did not use the word ‘welder’ but ‘voter’. Scarborough responded back to a tweet by journalist Mehr Tarar, he said, “What in the world are you even talking about? As I tweeted earlier, I said “voter” from the Bronx”

What in the world are you even talking about? As I tweeted earlier, I said “voter” from the Bronx. https://t.co/SI1DAJZ90Q

A lot of people picked on that point to mention that if Virender Sehwag cannot even back his statement with the correct information, then he should keep PM Imran Khan out of his mouth. Many even took jabs at his career as a cricketer saying that he couldn’t excel in cricket and now cannot see Imran Khan, a talented former cricketer, excel in something as difficult as politics.

Here are some of the greatest reactions on Twitter that completely roasted the former cricket to bits:

Absolutely every Pakistani would agree with this Tweet as it speaks for itself. It is embarrassing to see how Sehwag decided to tweet out to his enormous follower count, all the while making the silliest of mistakes.

He clearly said ‘voter’, not welder. Voters in the Bronx have had long-standing problems with their infrastructure.

Not sure how any of that is embarrassing for Imran. https://t.co/KY21BIyMQS

One can actually feel the burn from here with this one!

Now apologize if you have an iota of self respect which I am pretty sure you don’t have https://t.co/ySsVFscKgq

Even the actress Ushna Shah decided that she needed to school Sehwag and put him in his place.

I don’t watch cricket but I’m guessing you’re one of the stupid cricketers.

This tweet raises a decent point which is that almost any person can become a politician now. This doesn’t mean that people from lower-class families cannot get involved in politics. It is about the qualifications and know-how of politics that is important, but the most compromised. And that is something visible within the political world of today as the leaders of huge nations have no clue what is right for the people. Nevertheless, Sehwag was once again roasted for his guts to tweet a wrong word.

Most Indians have trouble understanding American accent. He said ‘Voter’ not ‘Welder’

Irony is an Indian trolling Oxford graduate Pakistani PM calling him a welder when his own PM is actually a CHAIWALA masters in ENTIRE political science.

What do you think of the situation? Do you believe that Virender Sehwag should have just kept his opinion to himself? Was the backlash on Twitter a great way for him to contemplate over the blind patriotism he possesses for his country? Share your thoughts using the links provided below.

Zainab Abbas Wishes Shadab Birthday And Wait Is There Something We Should Know?
Celebrities & Supporters Wish PM Imran Khan On His 67th Birthday!
To Top