Islam is the most progressive and modern religion of this time. It’s revised and presented in parallel with the modern life ideologies, logic and reasoning. As Muslims, it’s our foremost token of faith and our characters outright represent our religion.

Meanwhile, it’s our moral duty to protect our religion from all kinds of attacks and blasphemy, however, no one still is obliged to carry the law in their hands and seek punishment for the guilty. Just recently, a video surfaced social media which has sparked distress among Muslims. It features a scantily clad woman wrapping a cloth all over her body, which has Quranic verses printed on. 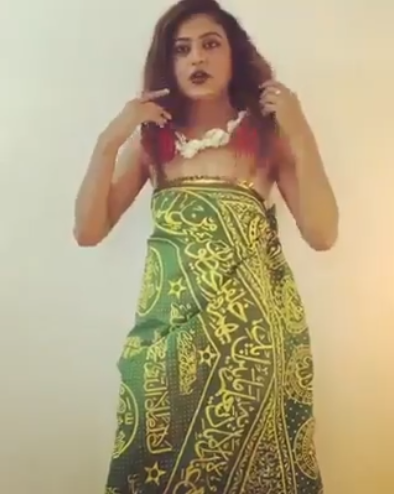 The video has spread like wildfire and it continues to cause anger and resentment among people. Meanwhile, they urge others to condemn it on all grounds and report it to Facebook. The social network has been proactive in terms of an issue as vulnerable as blasphemy which is why it’s looked upon by the community to take readily action against it.

Here’s the video and also response of the guy:

What is this woman trying to prove here? It goes beyond sense to think what drives these kinds of people to commit such acts. No religion has ever allowed their followers to disrespect or make fun of other religions. All religions speak the same language of love and peace. Besides, you do not have to be a religious person to acknowledge that it’s vile to hurt other people’s sentiments based on their religion.

This is one of the dirtiest examples of Islamophobia that is spread across many parts of the world. As Muslims, it’s our moral duty to condemn it on all grounds. We urge you to report this video.